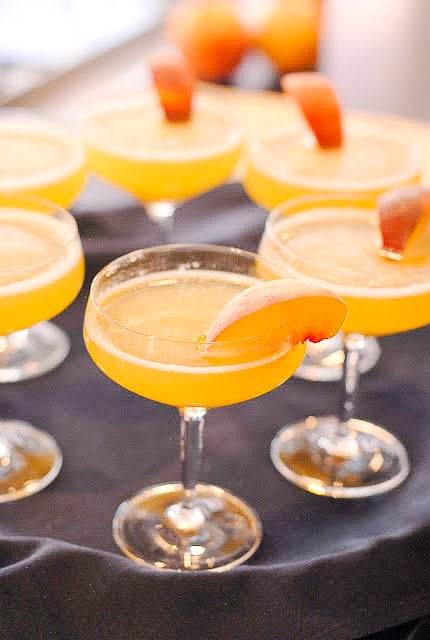 On a recent trip to Vail Colorado I had the opportunity for a condensed ‘meet and greet’ with several of the shining stars in Vail’s current dining landscape. Our culinary speed dating weekend left me with many impressions, all good, as well as some particular surprises and ‘ah ha’ moments. One of those was with Elway’s, a steakhouse bearing the attention-grabbing name of beloved former Denver Broncos quarterback and owner John Elway.

I realize steakhouses have come a long way since the moody, masculine, slab-of-beef–and-a-loaded-baked-potato chophouse of yesteryear but I was caught off guard, pleasantly, by the fresh and local approach that is the core of Elway’s’ focus.

Having opened less than a year ago in November 2011, this third Elway’s restaurant is well on the road to making its own mark servicing the prestigious ski town all year with Colorado-style hospitality and inspired cuisine.

On this day a handful of journalists from across the United States and I met up with Executive Chef Shawn Cubberley for a trip to Vail’s Farmer’s Market seeking fresh, local produce for Shawn and Elway’s Sous Chef Justin LaCapria to prepare lunch showcasing some of the best Colorado has to offer.
As a locavore myself this approach to preparing a meal is a familiar one though always bearing a bit of mystery about the end result, never knowing what ingredients will be fresh and available.
To me it best demonstrates a chef’s acumen and creativity, all the while feeling a bit like the Food Network TV show ‘Chopped’, with a hodge podge of ingredients testing the mettle of the chef at hand. 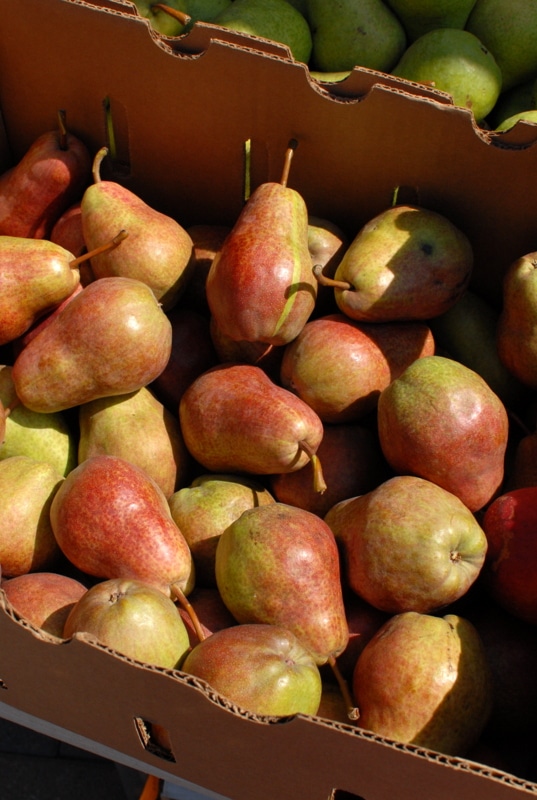 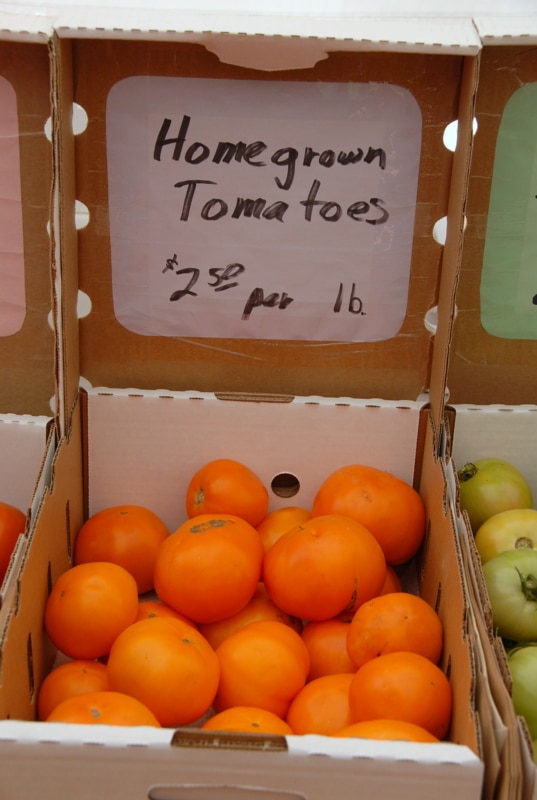 We wandered through the pulsing Farmer’s Market crowd chatting with Chef Shawn as he scanned the landscape for produce that appealed. Shawn began his journey as a mere teen in New York. He’s wound his way through Chicago then Denver working with local culinary luminaries before beginning his ascent within Elway’s from Sous Chef to Executive Chef of their Vail venture.

His enthusiasm was palpable during my chat with him about Elway’s role in being a player with other local notables to put stellar cuisine on Vail’s roster of top reasons to visit. He’s a down to earth, cool guy who is not satisfied to merely have Elway’s be a good restaurant in a ski town.

Elway’s seeks to deliver a uniquely Colorado experience from the locally-focused, seasonal cuisine to easy hospitality all set in a comfortable, relaxed, chic environ. Based on my time with their staff they are well on their way to deliver.

I sensed Chef Shawn embraces the challenge of building a seasonal menu by letting the ingredients take the lead and approaches the Farmer’s Market not with a list but an explorer’s eye toward uncovering the gems he knows await him.

When returning to the restaurant Sous Chef Justin La Capria perused the bag contents, wheels undoubtedly turning to transform our market expedition into a cohesive lunch. 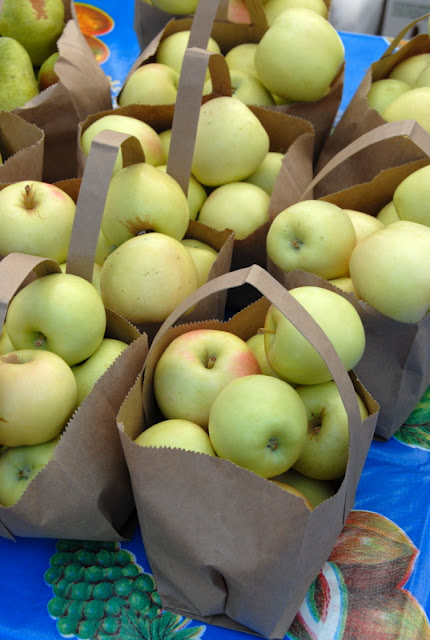 While the chefs began to weave their magic our group segued to the company of Jim Lay, a Bon Vivant, seasoned Vail restaurant veteran and Elway’s Sommelier who I feel convinced has never known a stranger.
Being a colorful guy, Jim felt the best way to kick off our time would be to saber a bottle of sparkling wine (what else would one drink at 10:00 a.m. on a Sunday morning?). Jim explained that every bottle has a vertical seam which must be discovered and followed to a weaker spot in the neck of the bottle which serves as the path of travel for the blunt side of a saber, striking the top of the bottle thus shearing it off in a clean break. Despite Jim’s effortless demo, please do not try this at home! 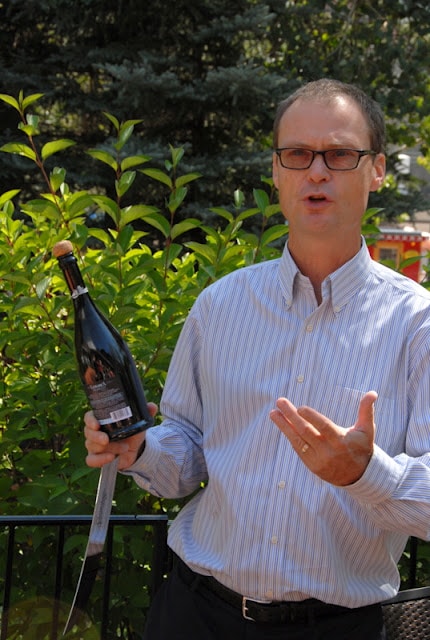 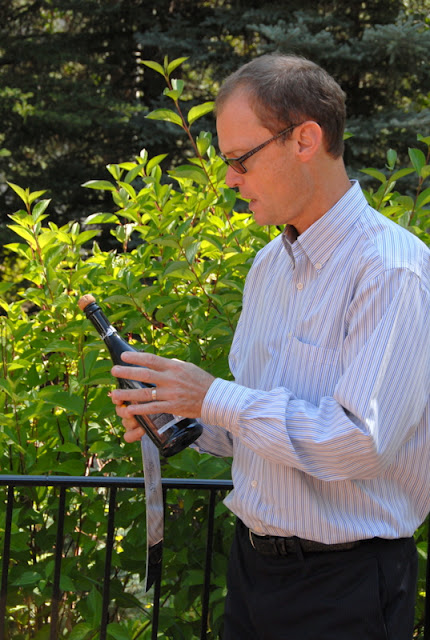 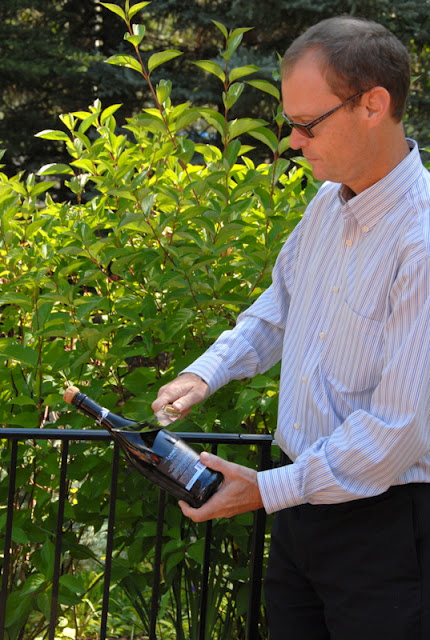 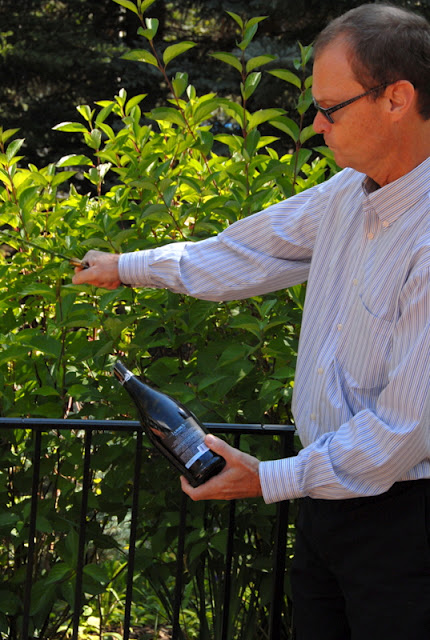 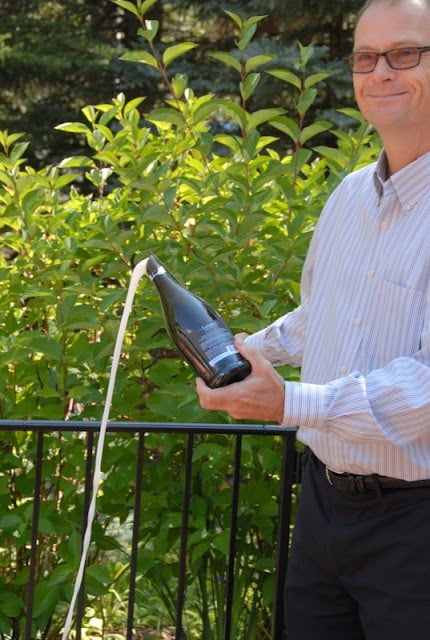 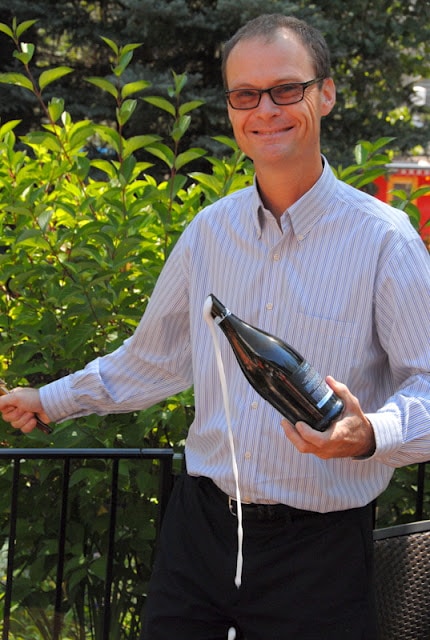 Settling into our buoyant group effortlessly Jim flowed with the conversation sharing stories of inspired cocktails, Vail restaurant history and star sightings (at our pleading). On the eve of Vail’s 50th anniversary, Jim has witnessed and participated in many of the chapters defining this iconic resort town. 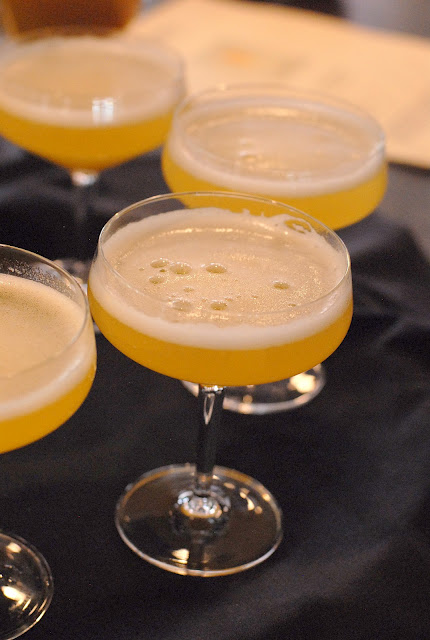 Jim had prepared fresh Colorado Bellini’s for our group. Local peaches hit a peak of ripeness for two dense weeks right now making it the most celebrated time for any peach dishes or for preserving them. Jim’s approach includes simmering peaches in late harvest dessert wine to produce a nectar that forms the heart of the Bellini. The cocktails were sublime in sunset tones with the perfect sweetness of a ripe peach itself. 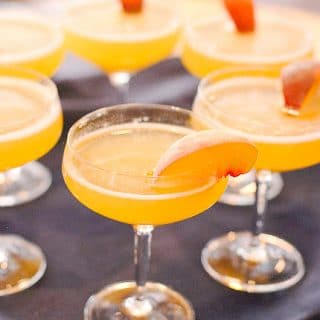 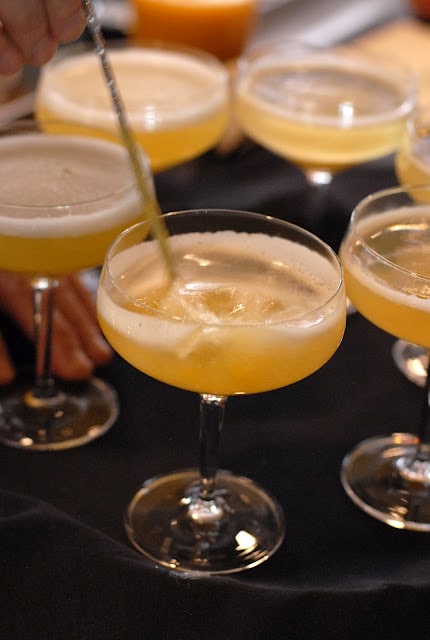 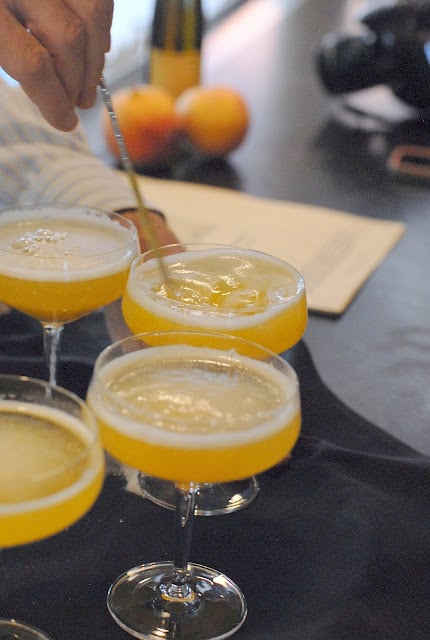 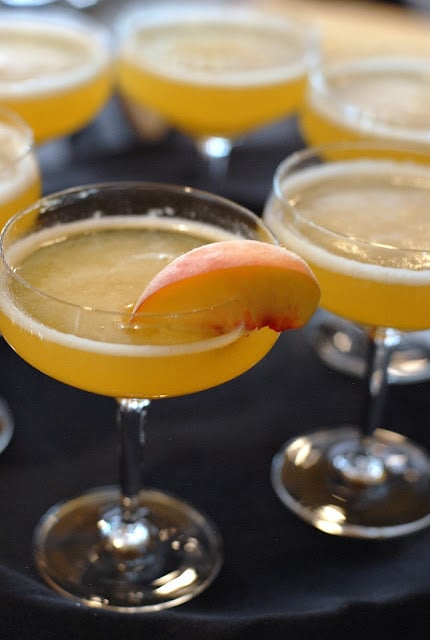 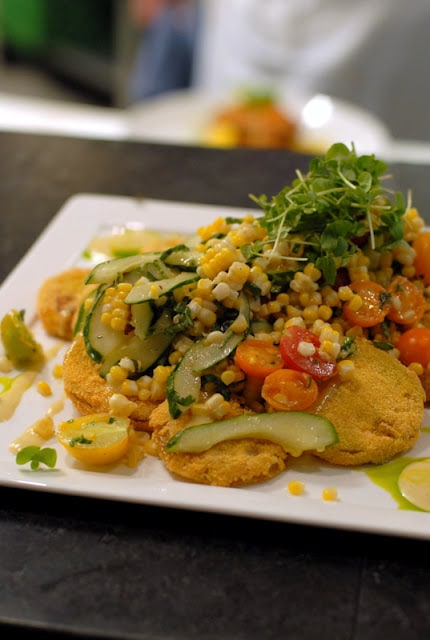 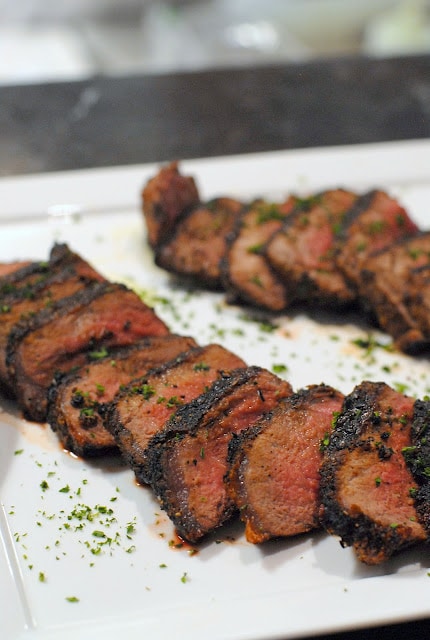 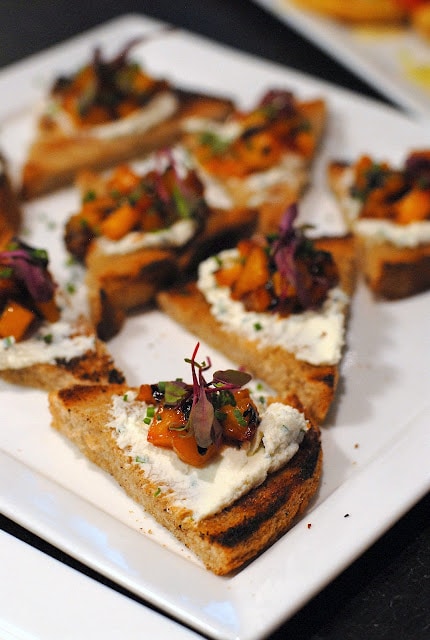 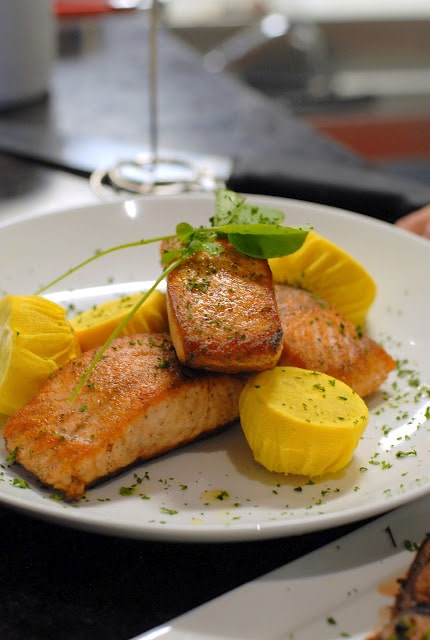 It struck me as we dined that Elway’s has crafted a perfect melding of fresh, local, seasonal food with the best aspects of a traditional steakhouse we love. It is current, dynamic and certainly fun. Whether one visits the restaurant to bask on the tree-lined patio with one of the 7 $7 happy hour specials (can you guess John Elway’s jersey number?!), to enjoy one of Jim Lay’s fanciful cocktails or superior wine selections, or to hunker down for dinner, I feel sure they will find more than what they came for. Vail is no longer just for winter and Elway’s is far beyond ‘a good restaurant in a ski town’.