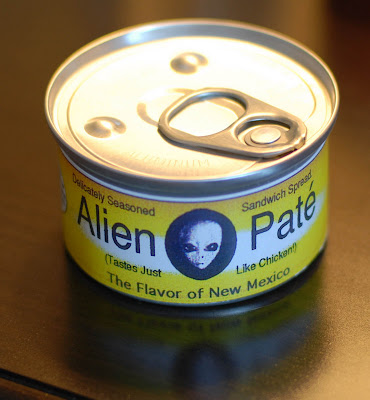 In case you ‘missed the memo’, Roswell New Mexico is the seat of extraterrestrial drama, intrigue and controversy in the U.S.  When arriving in the town it certainly did not disappoint.
My destination was the UFO Museum and I felt the ‘alien pride’ in Roswell immediately upon crossing the city limits.  The heralding of the local claim to fame began with the 3 ½ feet tall green aliens waving welcome to passersby at a large hotel chain, followed by the alien-cum-Cola guy at a large fast food chain, not to be trumped by the alien lamplights all through town.  The fact that the local Rehab facility was listed on the same direction signs as the UFO museum was not lost on me.

The UFO museum is housed in a gigantic building that from the entrance may have been a large theatre pre abduction fame.  I entered to find a mass of displays exhibiting written documentation in the form of endless newspaper articles, court documents, handmade scrapbook like displays, often several versions of the same photographs from different publications pasted on the walls of several makeshift three sided rooms.  Having driven 11 hours over the past 24, I could not assimilate the volume of data.
What I gathered is in 1947 there was a sheep farmer who came upon unidentifiable wreckage on his property.  Busy doing sheep’ish things he neglected to mention if for a few days but finally brought some of the debris into town to show the sheriff.  The sheriff said he was not sure what it was either.  Somewhere in there they engaged a government agency which is when the story becomes fuzzy.  Was there a cover up?  Was big business involved?  Was it a hoax?  No one really knows for sure.  And what do you do when you WANT to know for sure?  I consulted with the strolling security guard to net it all out.
I went over my understanding with the guard, which he confirmed was correct.    ‘There are all these photos but none of the actual crash, debris or site, is that correct?’  He confirmed I was correct.  ‘Why?’  He felt it was 1947; the sheep farmer had no electricity and probably no camera.  Ok, I can buy that.
‘Did I also read 4 bodies were discovered and removed from the site?’  He confirmed this to be supposedly true but not by the sheep farmer.   Hmmmm.  I too went through the 90’s obsession with the X-files as well as have worked with engineers and I knew this data did not add up.  The guard, sensing my dis-ease with the lack of concrete facts, suggested all this information has been amassed to let us decide for ourselves.  Well what I decided is that I’ve never seen more alien paraphernalia in my life.
There was original alien ‘art’ (that term being applied in the broadest, loosest and most generous sense of the word).  There was a life sized horse decoupaged with news articles about the alien activity in Roswell, which after traveling the country, has been retired to spend its golden years at the museum. 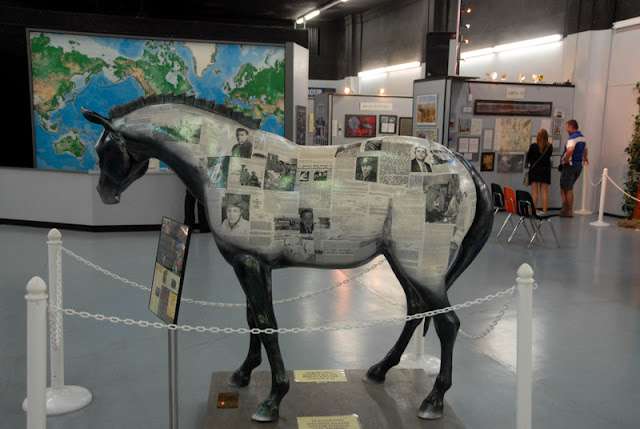 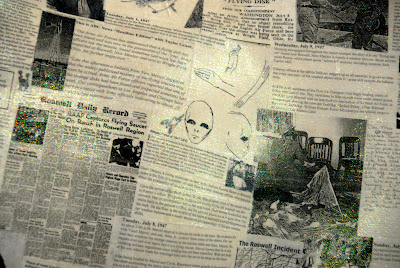 There was a huge sequined UFO that based on its dust layer, I surmise was stolen from Studio 54 in the 1970s. 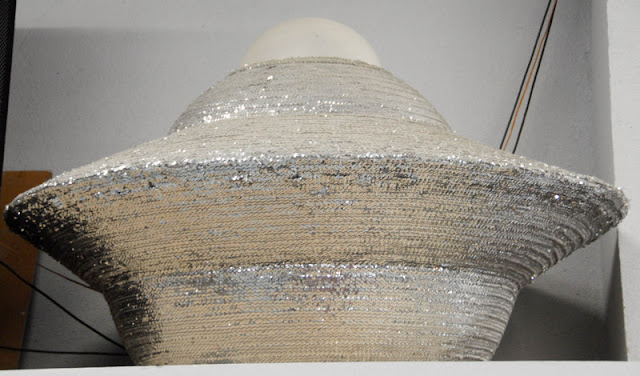 What I found most intriguing however was the gift shop.  We were free to take all the photos we chose, until we hit the gift shop.   We were told when entering the museum ‘no photos in the gift shop’.  Ok.  Hadn’t crossed my mind, but fine.  There were several neon printed signs when entering about NO PHOTOS as well as several inside.  I was told it was a copyright thing (huh????).

Rather than detail what WAS in the gift shop, I’ll suggest if you can think of it, it WAS in the gift shop in alien form.  One item of particular intrigue to me was a cookbook, alien of course.  I opened it expecting for $17 in spiral binding to have exotic finds such as Moon Dust Soup or Red Earth of Mars Heavenly Cake recipes.  Instead there were mundane offerings like Betty’s Cole Slaw (again, huh?).  I went up to the cash register to inquire.
‘Who are the contributors to your cookbook?’  The two attendants were not incredibly sure but they felt Daisy the prior gift shop manager and some of her local friends were receiving the royalties from all cookbook purchases.  I looked around and in a hushed voice asked ‘So are there any alien recipes in the book?’  They laughed and said no, only Daisy’s.  $17?!
Before exiting the UFO Museum I will say I did not conclude anything about an incident in Roswell other than they need a new curator to simplify the written material into one concise display.  You just cannot expect people who have driven hundreds of miles through a lot of nothingness to arrive here to assimilate to a conclusion.
I watched part of a video at the museum that did grab my attention; Crop Circles.  I’ve not thought much about them other than imagining someone with a GPS and tractor on the ready is responsible as with the corn mazes at Halloween at our local farms.  However the experts in the film pointed out several mysterious things.  In all the bonafide crop circles the plants are bent a few centimeters from the earth, not broken off, still living and continue to grow, produce their crops as normal just in a horizontal position.  They are also woven together in a sort of basket weave pattern when observed up close.  The electro-magnetic field as measured after a crop circle appearance is different.  Also the mathematical precision required to create some of the elaborate fractile shapes is purported by experts to be impossible for an artistic Joe Blow off the street with a machete to whip up.
Our last stop was the Mac Daddy of all Alien shops.  Across the street, and with no issues with photo taking (of course now I was dying to after being denied at the Copyright Gift Shop).  Being a food blogger, two items caught my immediate attention: Alien Pate and Alien Sausage.  The sausage seems a relabeled Vienna product but the pate was listed to be made of ‘gray aliens’.  I asked the owner of the shop if she’d personally tried the Alien Pate and she said she was a vegetarian. 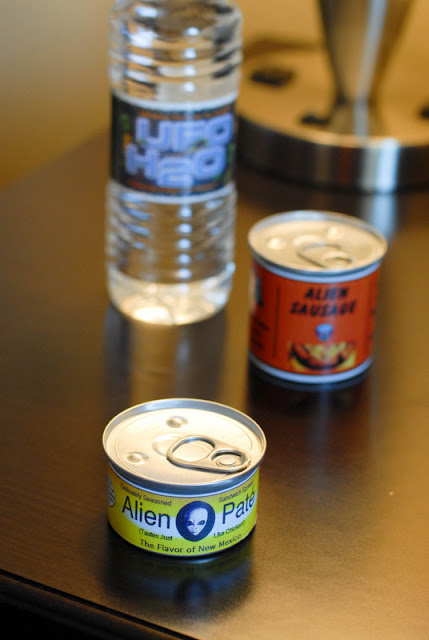 Despite my best photo efforts I’m afraid you’ll miss the fine print so I’ll spell it out.  The Alien Pate is advertised as a ‘delicately seasoned sandwich spread’ as well as that it ‘tastes just like chicken’ with ‘the flavor of New Mexico’.  It is made of ‘100% gray aliens caught and processed in Roswell, NM, guaranteed NOT dangerously radioactive and FDA approved’.  The ingredients read:
“Gray alien, water and secret galactic empire spices. No preservative necessary”
The equally appetizing Alien Sausage maintains the contents to be ‘100% alien meat and by products’.  I felt the two would be a perfect complement to the UFO H2O I purchased at the photo-phobic museum gift shop which boasts being ‘preferred by aliens in all galaxies.’
I had planned to spread some pate on some crackers perhaps with a dusting of my newly purchased chile powder for a photo but then it struck me, would alien pate be gluten free?  Is it organic?  With all these mysteries to ponder, I felt it best to keep the container sealed.
Honestly?  I’m too creeped out to open the can. 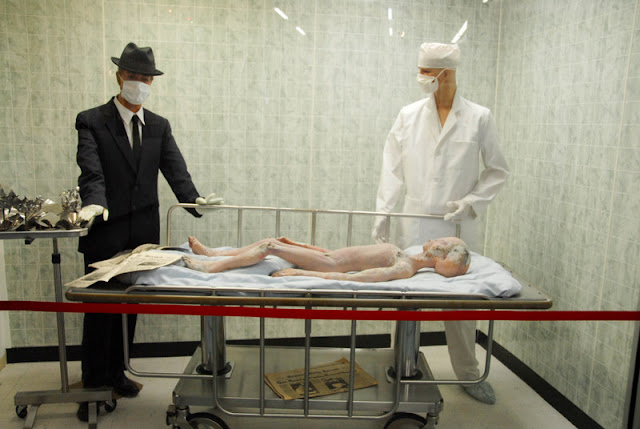