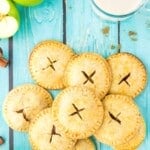 There’s no better dessert than a delectable Apple Hand Pie. These mini pies are made with buttery flaky pie crust (store-bought shortcut), delicious filling and apple pie spice. Use your favorite apples for baking to and enjoy an apple pie recipe in a delicious way!

Traditional Apple Pie is a cozy, homey dessert everyone loves. When you don’t want to make a full pie these Apple Hand Pies are the perfect mini apple pies and everyone gets their own!

Little hand pies are delicious and a favorite dessert. They can be made any time of year but are especially fun in the fall during apple season. Instead of a regular pie crust store-bought pie crust is cut into dough circles with an easy apple pie filling added to middle of each one. It’s a time saving shortcut that makes the recipe even easier!

Flaky crust, warm spices, sweet apple filling that tastes straight out of an apple orchard make this handheld dessert so special. They are the perfect option when making a classic apple pie isn’t in the cards.

Try our Apple cookies and Apple Crisp recipes too!

What is a hand pie?

They are small sealed stuffed pies that can fit in your hand and don’t require cutlery to eat them. The original hand pies were savory (called meat pies or pasties) and trace back to 19-century England.

Green apples. Use 2 large green apples, peeled, cored and diced. We used Granny Smith apples which are delicious when baked. Any apples that work well for baking can be used.

Butter. Two tablespoons of salted butter will be used. It can be cold since or room temperature; it will be melted for cooking the apple filling.

Egg. One medium or large egg is used to make the egg wash.

How to make Apple Hand Pies

Place the diced apples, butter, brown sugar, granulated sugar, cinnamon, salt and nutmeg into a saucepan. Stir gently while over low heat. Allow the butter to melt and the sugar and spices to blend together with the apples (photo 1).

Simmer for 5 minutes over low heat until the apples have softened. Remove from the sauce pan and allow the apples to cool (photo 2).

While the apples are cooling, line two rimmed baking sheets with parchment paper.

On a separate piece of parchment or a silicone mat unroll the pie crust dough.

Using a 3-inch round cookie cutter, cut out circles of pie crust dough (photo 3). Remove the remainder of the dough from around the circles. Set the pie crust scraps aside and save them (photo 4).

Repeat this process with the second pie crust to create more hand pies. Take the remaining pie crust scraps, combine them and pat or roll them back out to create a new piece of dough to cut out additional crust circles.

Place half (6) of the cut pie crust on a prepared baking sheet spacing them about 2 inches apart (photo 5). These will be the bottom of the hand pies.

Place one tablespoon of the cooled apple filling mixture in the center of each circle (photo 6).

Using a wet finger dab a bit of water around the edge of the pie crust. This will help the top piece stick to the bottom piece.

Top each filled crust with a second circle of pie crust dough. Press your finger around the edges to seal or use a fork to gently crimp the edges (photo 7).

In a small bowl, whip the egg with two teaspoons of milk to create an egg wash.

Using a small pastry brush gently brush the egg wash over the top of each filled hand pie (photo 8).

Place the baking sheets with the assembled hand pies in the refrigerator for 10 minutes to chill the dough. This will allow the hand pies to retain their shape when baked.

While the hand pies are chilling preheat the oven to 375 F.

Remove the pies from the refrigerator and, using a sharp knife, cut an X into the center of the top of the hand pies to allow steam to escape (photos 7-8).

Place the baking sheets into the oven and bake for 20 to 25 minutes or until the pie crust is golden brown. Allow the pies to cool on a wire rack for 15 minutes before serving.

Keep the pie crust cold. It’s easiest to work with chilled pie crust. When it warms it doesn’t hold its shape as well and tends to tear. Keep the second pie crust and scraps in the refrigerator while assembling the first batch of hand pies. Then take it out when ready to prepare the second half of the batch.

What types of apples can be used in this apple hand pie recipe?

Not all apple varieties are great for baking. Some become very soft and won’t hold their form when baking in a traditional apple pie or these individual apple pies. We love Granny Smith apples which are tart with great texture. Other varieties that will work well include: McIntosh, Honeycrisp apples, Braeburn, Cortland, Fuji, Winesap and Golden Delicious.

How do you keep the filling from leaking out of the hand pie?

To help prevent leaking chilling the hand pies once they are filled helps. The chilled pie crust will hold its shape better and will prevent leaking out of the edges. You can also make sure that the edges are well crimped with a fork or your fingers.

Can another type of sugar be used in this recipe?

Yes you can swap out the brown and granulated sugar for another type of sugar. Use all brown sugar, all granulated sugar, coconut sugar, demerara sugar, etc. Do not replace with equal amounts of liquid sweeteners such as honey and agave syrup as it will not become a thickened sugar syrup when cooked.

Is there a difference between a hand pie and a turnover?

Hand pies and turnovers are very similar. The biggest difference is in the type of crust that is used. Turnovers are often made with a square of puff pastry dough. Occasionally you will see apple turnovers made with pie crust instead of puff pastry. Hand held apple pies, like these, are made with pie crust. They can come in different shapes depending upon how the pie crust is cut. Apple empanadas are a type of hand pie and are often made from a single piece of round dough that has been filled and folded in half.

Place any leftover hand pies in an airtight container and store in refrigerator for 3 to 4 days. 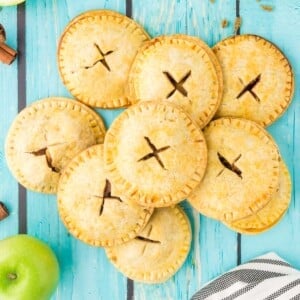 Nutrition facts will vary depending on pie crust being used. Ingredient Notes How to Store Place any leftover hand pies in an airtight container and store in refrigerator for 3 to 4 days.