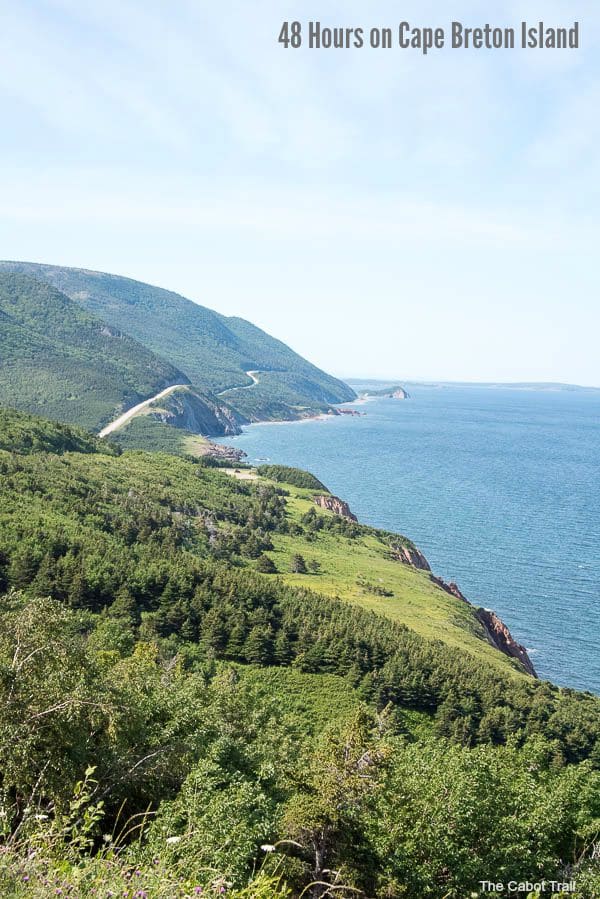 After a quick 48 hours on Prince Edward Island, our 6,000 mile road trip to the Canadian Maritimes delivered us via car ferry in 75 minutes to Caribou, Nova Scotia. The car ferries are a fantastic way to travel, taking hours off driving routes in addition to allowing more beautiful landscape viewing and the opportunity to spot sea life. The ferry cost is based on one’s vehicle, and reservations should be made ahead of time to ensure passage on preferred dates and times. 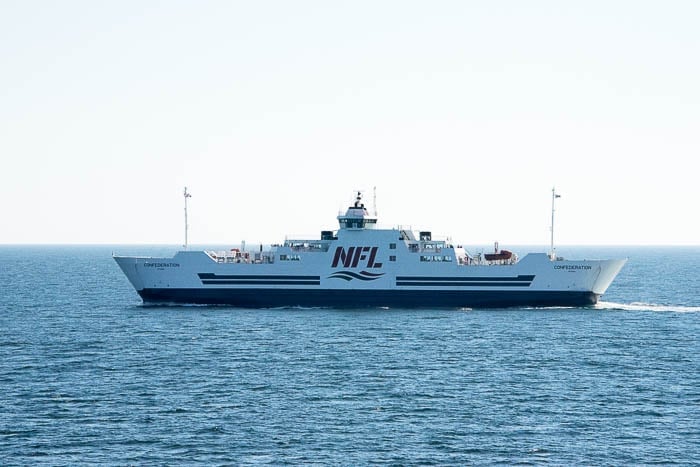 After docking in Nova Scotia, we beelined for our first night’s stay on Cape Breton Island taking us across the Canso Causeway, a thin strip of land separating Cape Breton Island from Nova Scotia proper. The causeway is a mere 40 years old, before which a ferry was required to get to the island. As with almost all legs of this trip our first stop was at the Port Hastings Visitor Information Center. There are visitor centers all over the island and we’ve found them an invaluable resource to clarify travel and activity plans, as well as better scope our touring route avoiding construction sites or areas of travel that might be less scenic.

Cape Breton Island was claimed by John Cabot for England in 1497 just five years after Christopher Columbus crossed the Atlantic bound for India. Cape Breton is a mix of cultures; Gaelic, French, English and Mi’kmaq (the local native tribe, known as the ‘First People’) languages are all taught in at least one school on the island. It is also the only active Gaelic speaking community in North America. 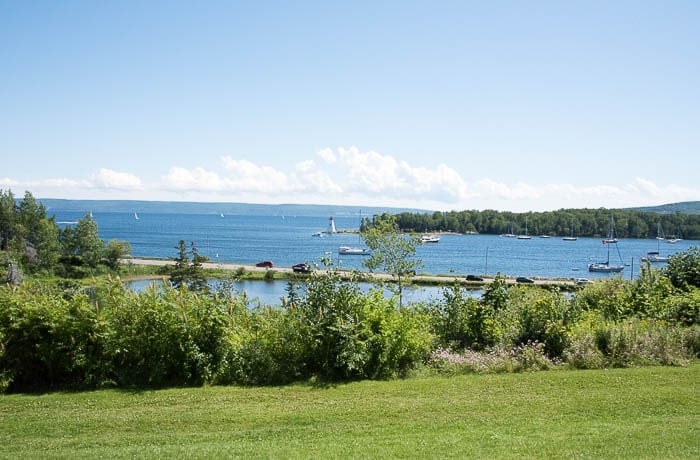 The beginning of our Cape Breton adventure was in Baddeck, nested mid island along the channel waters of the Bras d’Or Lake (translated as Arm of Gold Lake, named by the French undoubtedly for the reflection of the sun off the water). At first blush, Baddeck is a sleepy little waterside town bearing the distinction of the official start and end point of the Cabot Trail (the famous driving loop through Cape Breton Highlands National Park). However it was also home to Alexander Graham Bell and his family, his summer home actually, and a place he loved for its similarity to his native Scotland. The Alexander Graham Bell Historic Site has been established by Parks Canada and features an extensive and impressive museum chronicling his life and inventions that is a must see. Like many of the Parks Canada historic sites it participates in the Xplorer Program for youth which kids will love and learn much from. A fun highlight of the visit is the collection of kites to borrow from the museum and fly on the breezy knoll just as Alexander Graham Bell did. 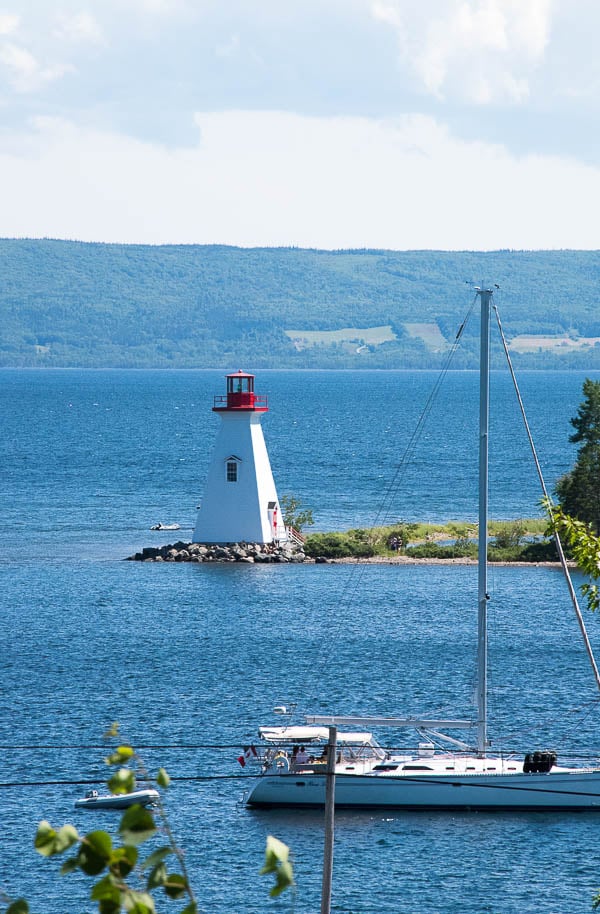 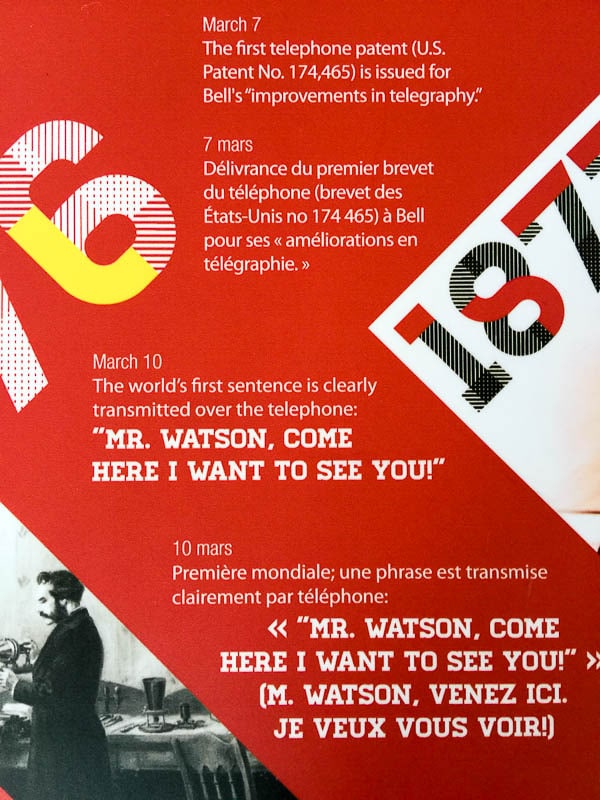 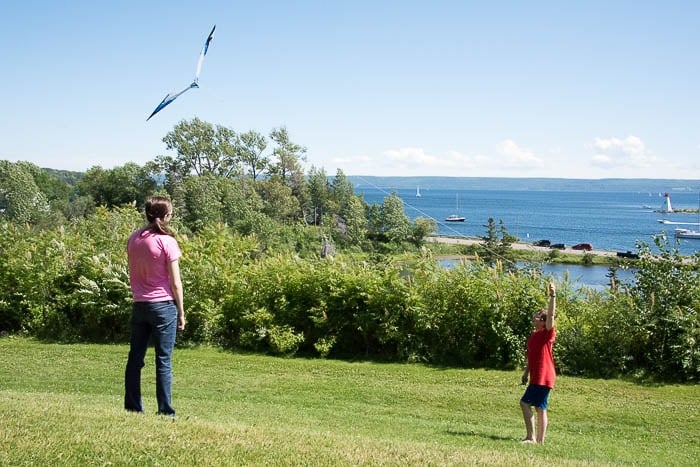 In my dining recon I’d found a local lobster supper restaurant we were dying to try which turned out to be one of the most unique and delicious meals of the trip. Inspired by the lobster suppers of Prince Edward Island, Baddeck Lobster Suppers features a nightly offering of a one price meal featuring an entrée of choice (1 whole Lobster, Snow Crab from Cape Breton, Fire Planked Salmon or Grilled Beef Strip Loin) and ‘all you can eat’ steamed Cape Breton mussels and seafood chowder, and a homemade dessert, non-alcoholic drink and coffee. 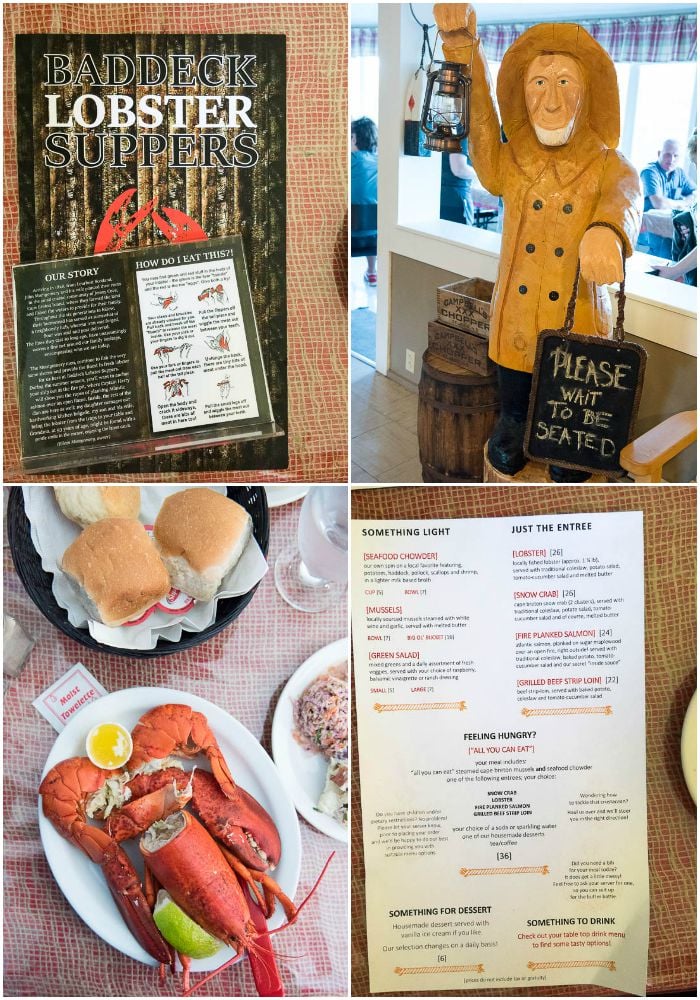 The night we went it opened at 4 which seemed very early (I thought no one would be there). When we showed up at 5 p.m. there was a wait and a challenge finding a table (contributed to by a casual, large wedding celebration party being there at the same time). Quickly after being seated a large galvanized bucket of steaming mussels arrived at our table along with their house chowder and we were in heaven. I can’t remember the number of mussel buckets or cups of chowder we had but certainly our fill! 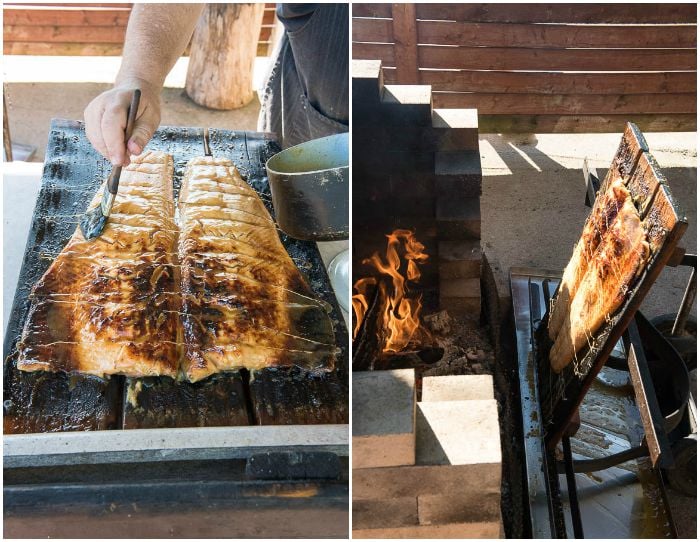 The salmon is cooked outdoors on site in a shed  in front of an open fire pit. The farm raised Atlantic salmon (almost all salmon is farm raised in this area) is wired to the Maplewood planks and basted with a sugar glaze to slow cook for hours. Baddeck Lobster Suppers is a family run business owned and run by the wife, with the husband being a lobster fisherman and salmon griller, the daughter is a trained chef. It’s definitely a unique dining experience that is relaxed with great local food. Like many businesses, it is seasonal so is open between June and early October (check their website before going). 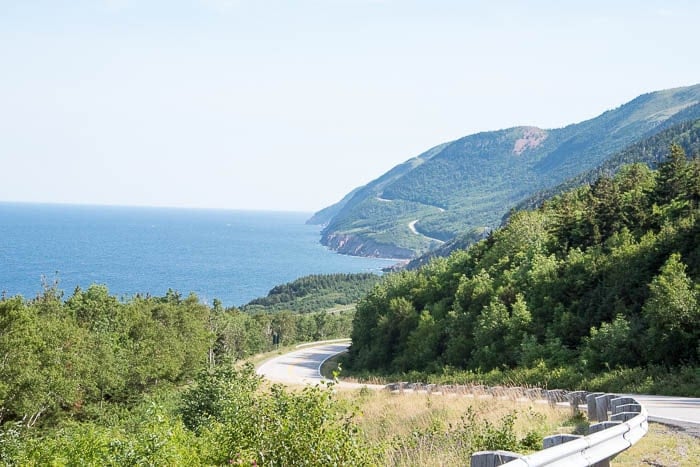 Our start the next morning was bright and early to conquer the Cabot Trail. The loop can be approached from either direction and we began traveling northwest toward the sea. My husband had his sights on a special hike, the Skyline Trail, which limited any long stops along the driving route until we had finished the hike. However were we to have had more time, an outing in Cheticamp on the west coast to snorkel with whales had caught our eye. There was also an enormous stone church that was breathtaking partially due to its scale being so much grander than the cute seaside cottages in the town. 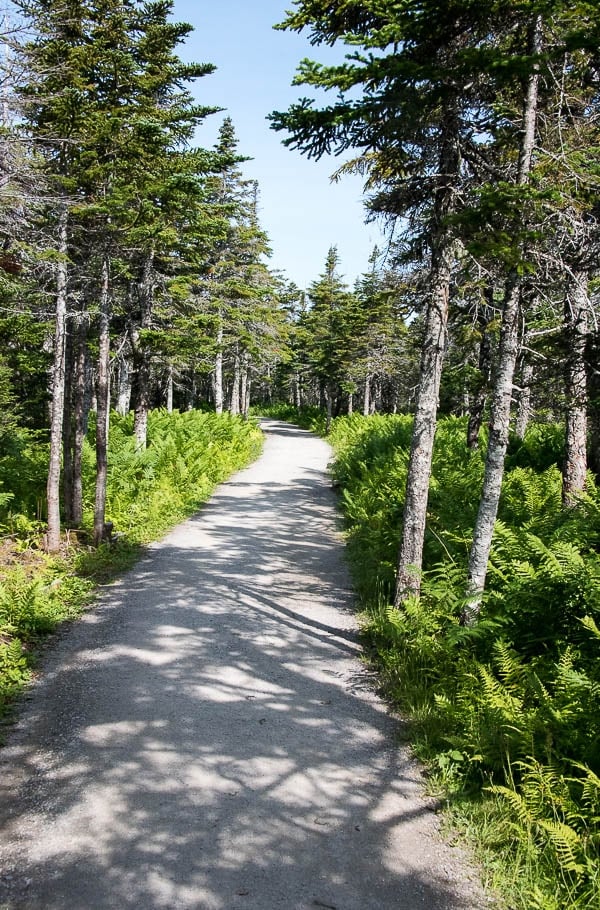 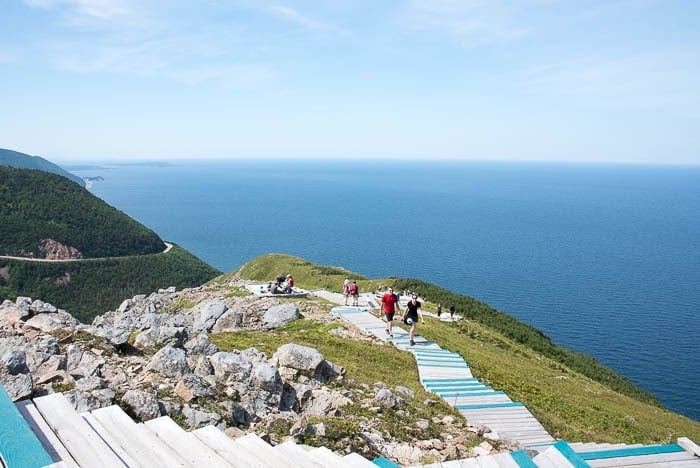 One travels through many terrains while on the Cabot Trail which can be driven in 3 ½ to 4 hours with no stops, however many of its charms will be missed. Winding up into the Cape Breton Highlands was reminiscent of the area around Big Sur California for me. The drive and view is spectacular hugging the edge of the mountains above the sea. Even for non-hikers the Skyline Trail is a must. Fairly flat, it’s a 2-3 hour hike (less if not taking the loop part of the trail) ending at the edge of the cliffs and a spectacular boardwalk snaking down the mountain toward the sea with places to perch for a picnic or to enjoy the view. Go early if possible in the summer and bring water. It is a breathtaking sight. 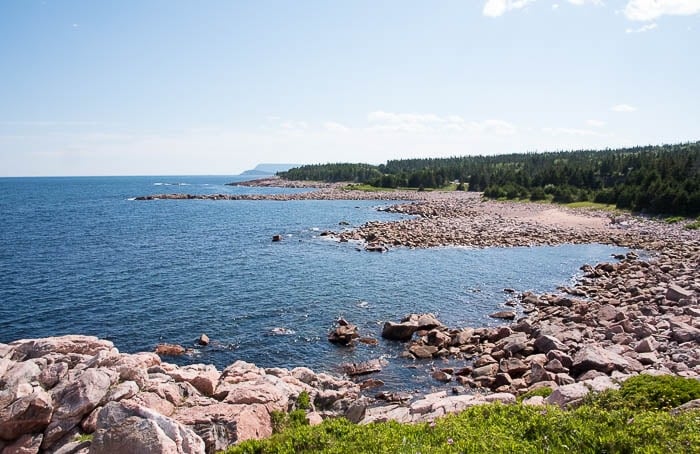 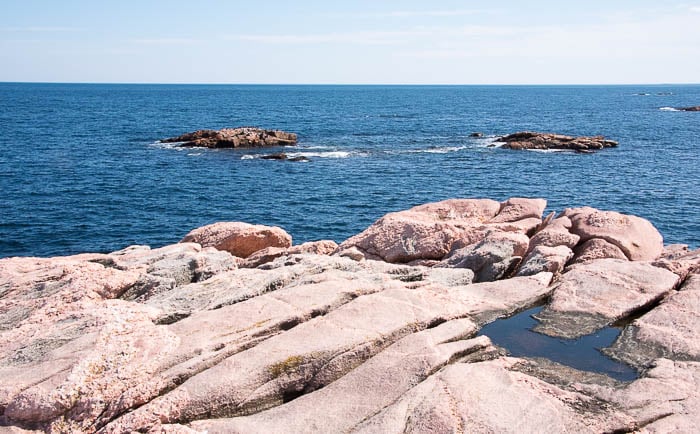 There are many stops along the Cabot Trail from rocky shorelines, to wooded areas and of course the green highland hills. Often Parks Canada docents are at the more popular turn outs, happy to answer any questions and point out any exciting finds like whales through telescopes set up at the vista. The trip could definitely be stretched out for a few days if wishing to stop and hike, fish, canoe, kayak, whale watch or more. We did it in one day arriving in Sydney for an overnight before proceeding to Louisbourg Fort the following day. If one were traveling on to Newfoundland, the ferry would be caught in Sydney. 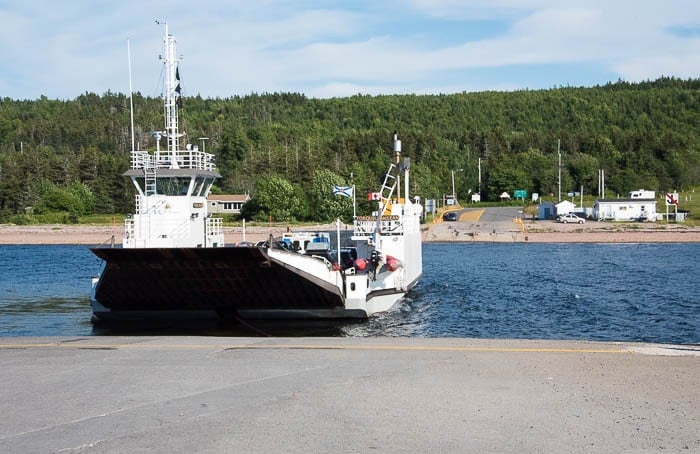 One tip we were given was instead of making the whole Cabot Trail and then dropping into Sydney was to take a short 9 car Englishtown Ferry ($7 paid when boarding the ferry) across St. Ann’s Bay. It takes mere minutes once on the ferry but there can be a back up to get on which can be lengthy. We turned off the car engine and enjoyed the sunshine and views while we waited. 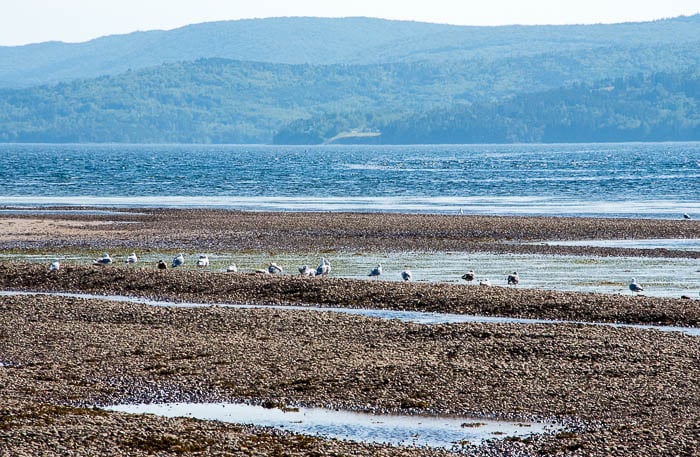 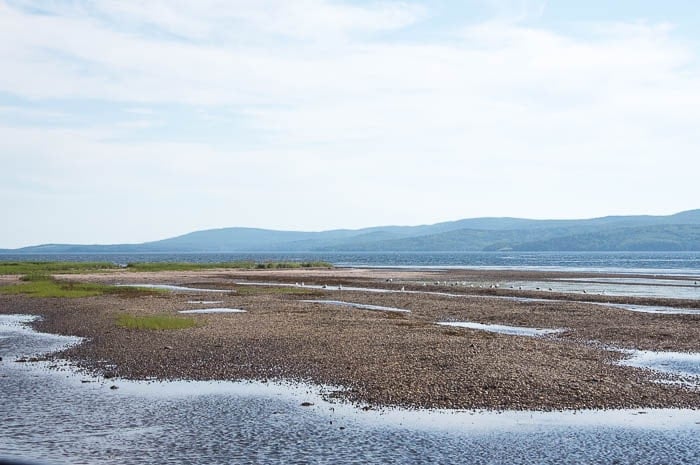 We had planned to dine at Flavor on the Water (reservations suggested) at the Sydney harbor that evening. The restaurant sources locally and has a menu with panache. Unfortunately we had a bit of a traumatic episode coming into Sydney which thwarted our plans. As we were driving at high speed toward Sydney, I noted something large flying past my window having come out of nowhere. We pulled over to realize the Yakima box on top of our SUV had somehow blown open and my husband’s fishing waders had gone flying out down the highway. Fortunately nothing else had come out though after retrieving the waders we were reluctant to travel out again that evening, instead regrouping to ensure we were set to journey on the next day.

We stayed at a beautiful Hampton Inn that night near the Sydney Convention Center which had a glassed in walkway connecting to Kiju’s, a restaurant serving locally sourced food and drink. Sitting on the outdoor dining deck under the setting sun, we had our first taste of poutine, Canada’s iconic comfort food, as well as some locally sourced seafood and beer (complete with a ‘panic line’ when nearing the bottom of the pint glass). 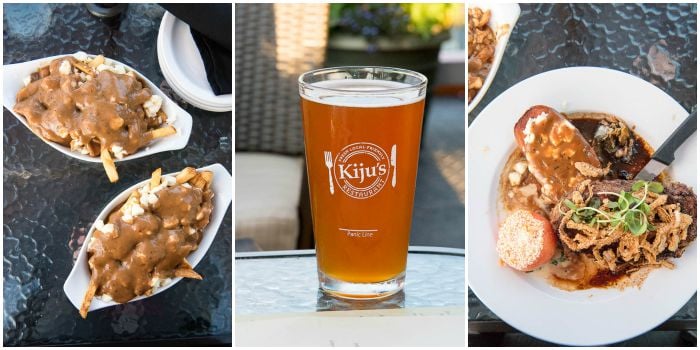 Day 5 took us to the Fortress of Louisbourg, the largest reconstructed fortress in North America. I did not have any background on the fort and candidly did not have any idea what was in store. This was the dark horse on the trip that really emerged as a favorite. The enormous reconstructed fortress is managed by Parks Canada and includes many buildings as well as people in period costume to recreate the essence of the time period. The parking area for the fort is atop a hill where one pays admission before boarding buses to be taken down to the sea to the fortress. Plan to spend at least a half day wandering through the buildings, taking tours, watching military drills of firing muskets and the canons, talking with craftspeople, enjoying period food in one of the multiple cafes or bakery. 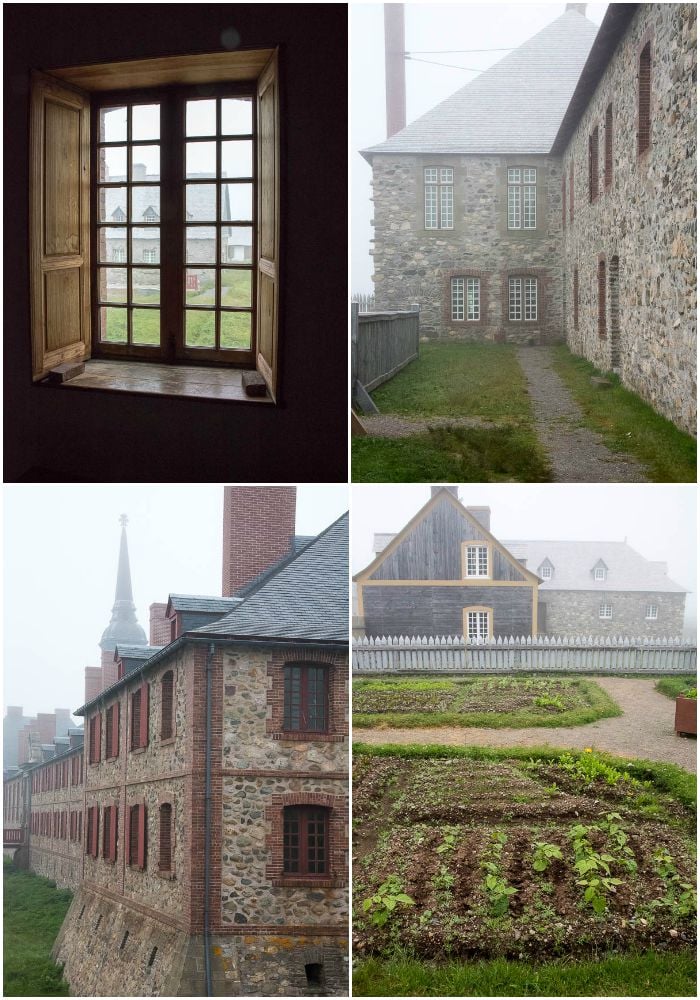 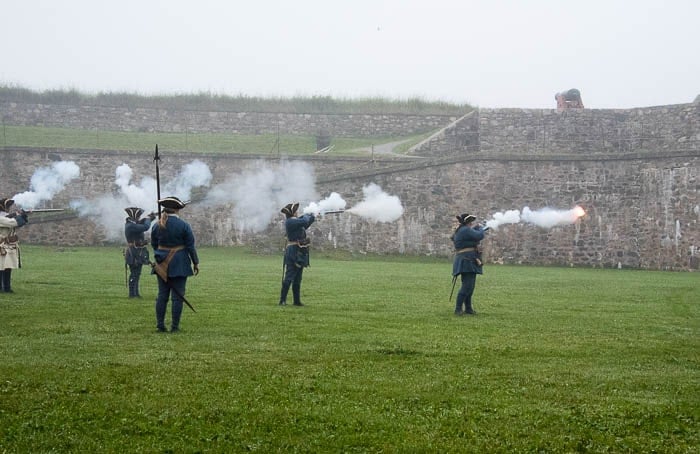 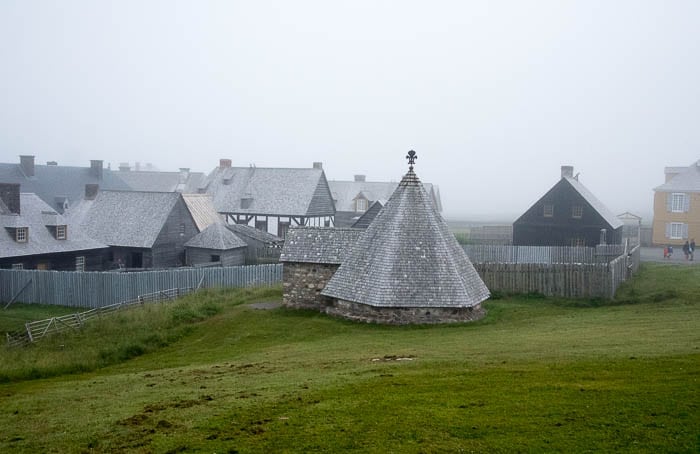 The day we visited was a brooding foggy day, setting a tone for our exploration. The fortress was originally built by the French to protect the entrance to the St. Lawrence river, and the rich fishing grounds (mainly cod) in the region. In a war between France and England, the English captured the fort but gave it back to France after the peace treaty in the early 1700’s. In a second war between England and France (known in the U.S. as the French and Indian War), the English recaptured the fort with help from New England Colonists. The New Englanders were still angry with the English for giving the fort back to the French the first time, so they completely demolished the fortress. Thus the current fortress was a reconstruction on a large scale on the grounds of the original fort. At one time the Louisbourg Fort was as busy a port as New York or Boston. Paintings found in the buildings on site depict the lively, bustling life or the original fort. Incidentally, these give-and-take themes are present with many of the historical sites in this region as the roots of Canada began in the Canadian Maritimes. 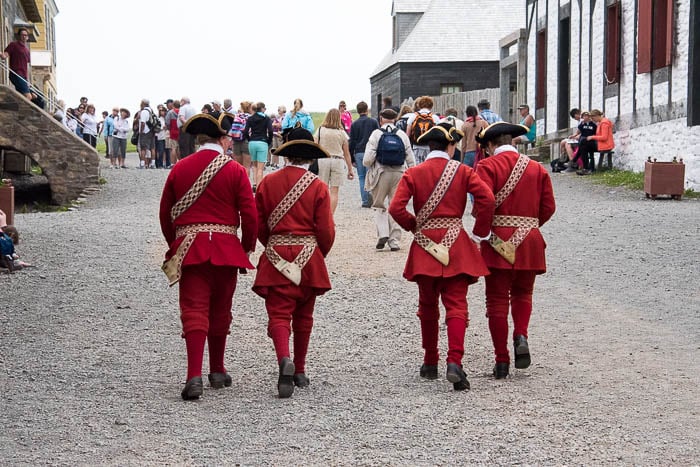 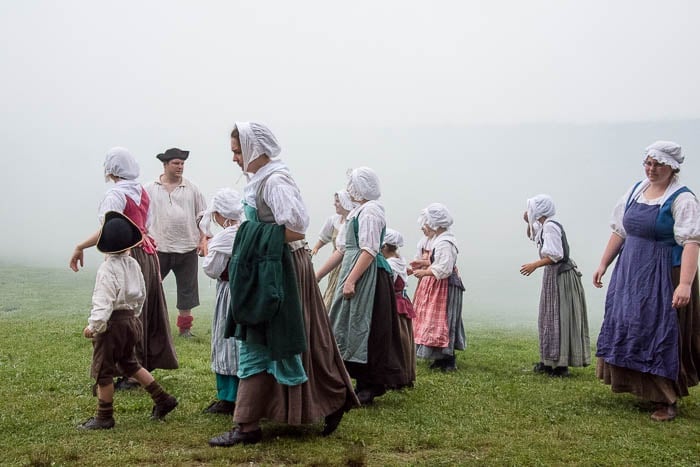