Home » Colorado » What’s a Locavore to Eat at a Renaissance Festival? 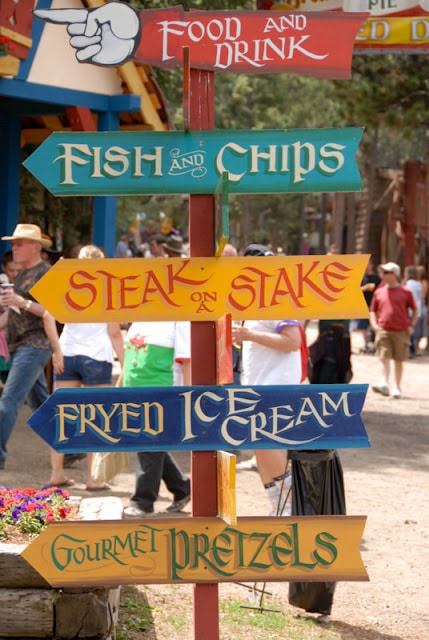 Well, nothing.  However in life there are always occasions to employ the 80/20 rule and this was one of them.  I was not about to turn away heavily corseted, amply cleavaged women speaking in Olde English, men in tights executed carnival tricks worthy of a new HBO series and bawdy humor over fear of nothing being locally sourced.  Once crossing through the ‘gates to the shire’ I realized I would need to put my Michael Pollan sensibilities aside and go with the food flow (though admittedly the sourcing of the meat was something I never dared ask about nor venture into other than a sample bite here and there).

For those of you possibly spared from attending a Renaissance Festival, it is a spectacle to behold.  When living in Northern California I went once or twice and it was simply unbelievable and enchanting.  Held on the perfect sprawling, wooded plot of land, the craftspeople, food artisans and performers snaked up into glens and ravines recreating a complete civilization. 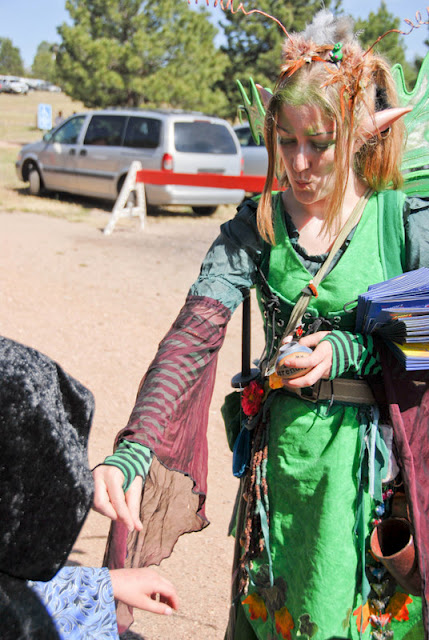 Here in Larkspur Colorado (halfway between Denver and Colorado Springs) it is no different.  After parking in a dirt lot you make your way toward the entrance to a village, protected on the outside by a wall and castle façade.  Waltzing through the mixed crowd (‘mixed’ meaning heavily decked out patrons sporting their best medieval garb and regular folks in pedestrian street ware) was a fairy sprinkling everyone discretely with pixie dust, papier mache people in costumes double the height of regular people, and other whimsical period folk in full channeling mode leaving you feeling transported to another time. 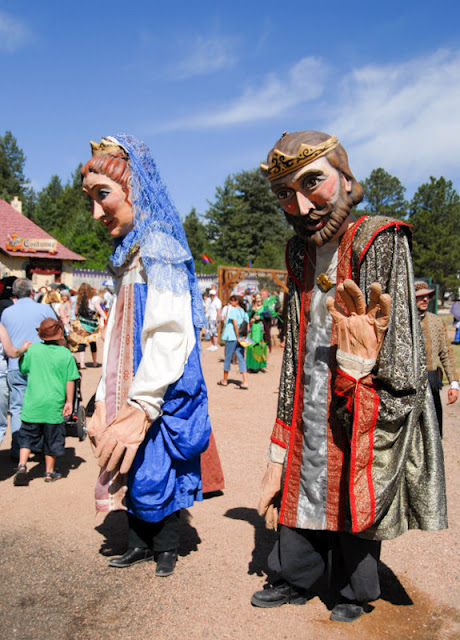 If you go arrive about 30 minutes early.  Both for decent parking but the royal court come out onto the walkway above the waiting crowd to entertain.  The court includes usual royalty and noblemen as well as a pirate and unicorn.  All the main entertainers for the day pop out for a mini debut to lure you to their shows.  Two favorites for me were the Washer Women, with blacked out teeth, a belt of archaic washing tools winding their way through the crowd flirting shamelessly with men, blowing in their ears much to the supposed discomfort .  There was also a duo of ‘Charming and Dashing’, self proclaimed Professional Heros who truly manifested like flesh and boned Disneyesque leading cartoon men.  The overdone bit playing really works in this setting. 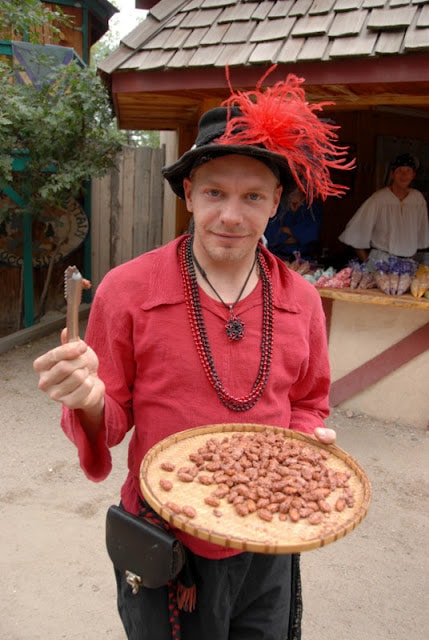 Immediately upon entering I was stopped by the Hot Cinnamon Almond guy with a sample.  Really good and gluten free.  Weaving between various artisans (flower garland head dresses, period clothing, Celtic jewelry, and cable controlled dragons) I ran into Slim Pickle, a guy with enormous dill pickles.  To be candid, after passing so many women with abundant cleavage wolf calling to men I felt entirely self conscious asking to see his pickles and then asking him to hold one for a photo.  I felt sure I knew the tongue lashing that would follow.  He was very nice as were his traditional dill pickles. 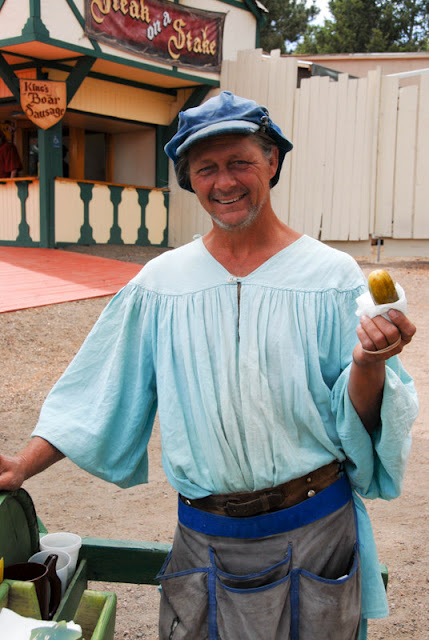 Passing camel rides on the way to watch knights joust I hit the mother lode.  Turkey legs.  They were everywhere.  How much more Henry the VII can you get?  They seemed to all being eaten by small boys.  Tiny boys.  Not even tall enough to reach the counter but they were mowing down gigantic turkey legs.  I briefly pondered what happened to the REST of the turkey with the sole leg consumption here.  I did not want to think about that. 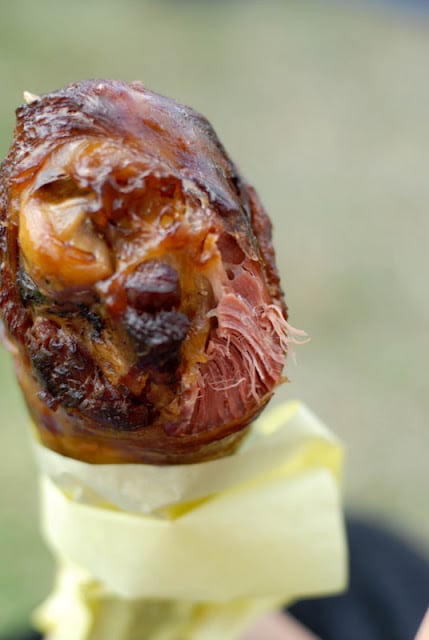 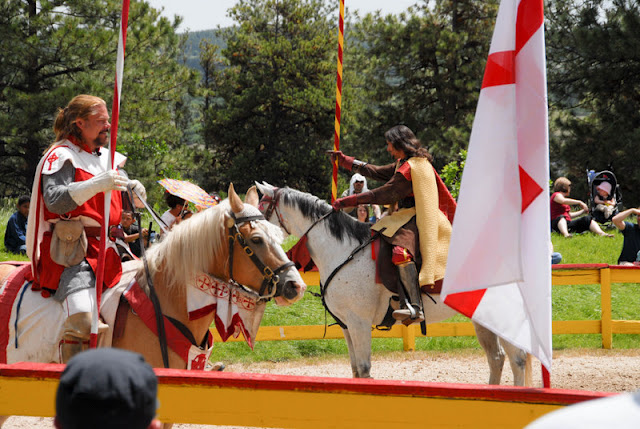 Steak On A Stake was another big hit.  Lots of people wandering eating these peppered ripples of ‘steak’ (it looked like flank steak, only a cheaper cut I’m sure).   I love it when a food is thematically coordinated to a venue or event.  This really felt fitting. 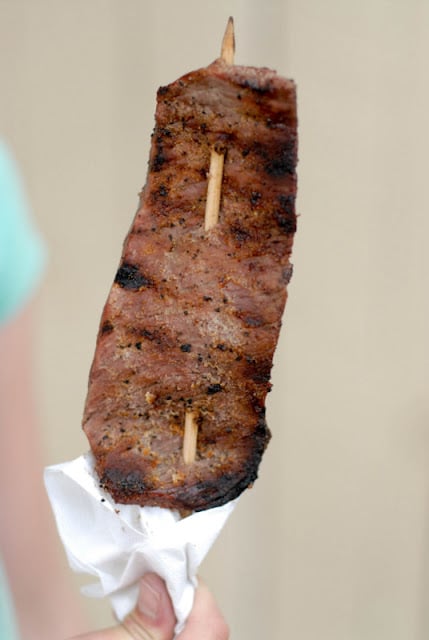 Part of our party split off to enjoy Ale Tasting at the Dancing Bear Pub while the rest went to find more to eat.  We actually found what I think was the only healthy item to eat: Fruit on a Skewer.  A lovely strawberry, piece of pineapple, honeydew melon and cantaloupe.  $2.75 a skewer.  Seriously (did I mention you should bring a credit card or lots of cash?).  Growing weary of the tipper war cry ‘HUZZAH for the generous tipper’ shouted at any tip I whispered to our attendant that I’d tip her more generously were she to utter a tiny Huzzah.  Glint in her eye, she artfully whispered and I showed my thanks in coins. 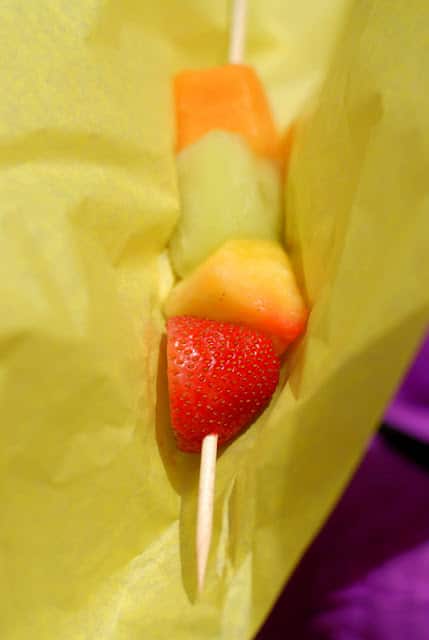 The Best Use of Food goes to an interactive event called Vegetable Justice where a heckling faire worker is suspended in a wooden display with only hands and face showing taunting tomato-hurling patrons to hit him.  The sign at the event warns it is an insult game and the victim takes his material to the vast outskirts of insulting stopping within a hair of ‘totally lewd’.  I’ve never quite experienced someone who exercises the art of innuendo to the teetering edge as this guy did. 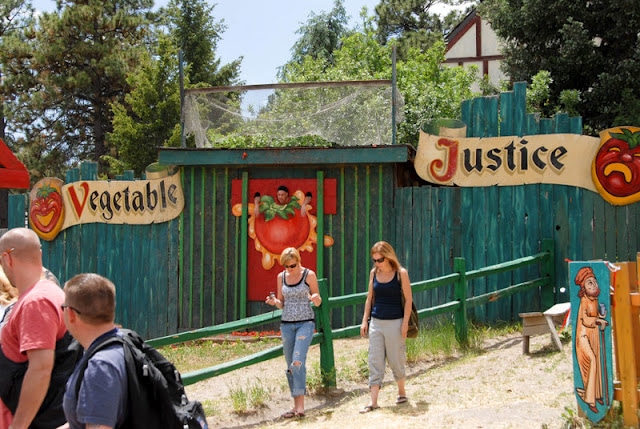 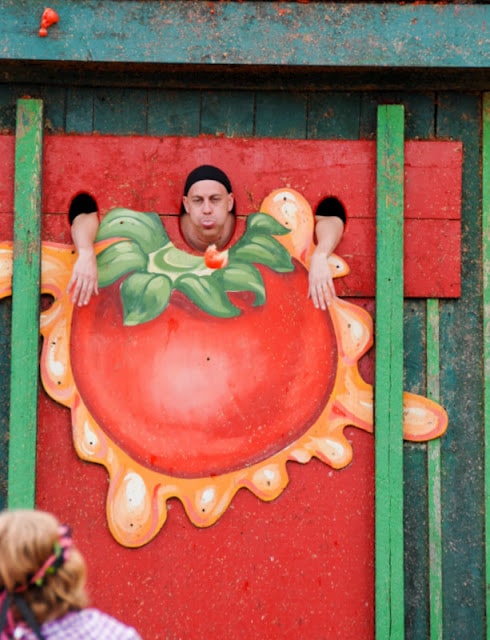 Most of what he would shout at people would not be appropriate to reprint (though there were no swear words….well only a few well placed and they were not the bad ones).  A woman stepped up who was fairly plainly and conservatively dressed. He shouted at her that he suspected ‘the carpet and drapes might not go together’ and then followed on with a reference to how easy it really is to swing around a pole.  Two college age guys really took him to task, throwing tomatoes like professional ball player.  The taunter went everywhere from asking if they were a couple to suggesting he was not at all daunted to be attacked by the co Presidents of the Chess Club.  It was Monty Python at its finest and most shockingly funny.  He did get hit on a bounce back to which he heckled ‘so you got me on the rebound like when your Mom found your Dad’. 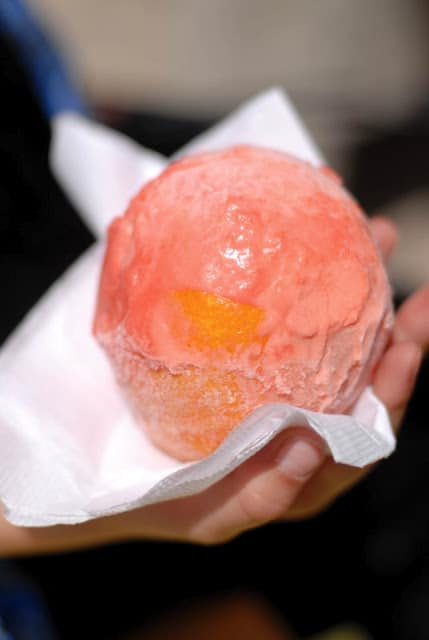 The Innovative Dessert Award goes to the half of an orange (orange fruit removed) filled with a softball size scoop of strawberry sherbet which was frozen into a medieval popsicle of sorts.  Great taste; way too much for one mortal to ingest.  The serving in our party was passed about and eventually discarded for the sheer volume. 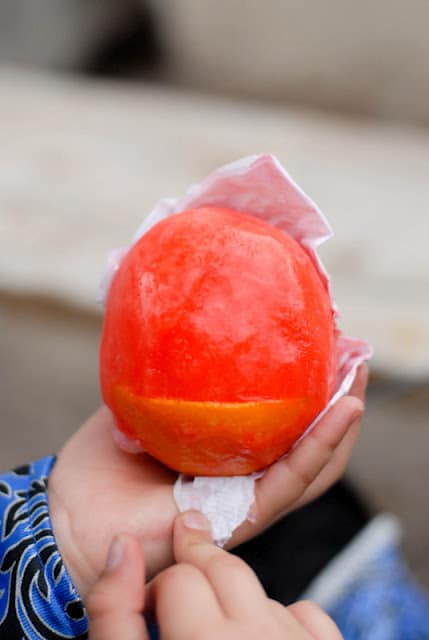 I passed on the Tarot readings knowing I would be told there was no healthy, locally sourced or seasonal food in my future this day.  Was almost run over by an elephant who strode through the shire.   Won a pink feather for popping a balloon with darts.  Enjoyed the rescued raptors from the Rocky Mountain Raptor Association who rehabilitates birds of prey who have been injured.   Blocked out the endless sexual innuendo and the ‘Ma Lady’s. 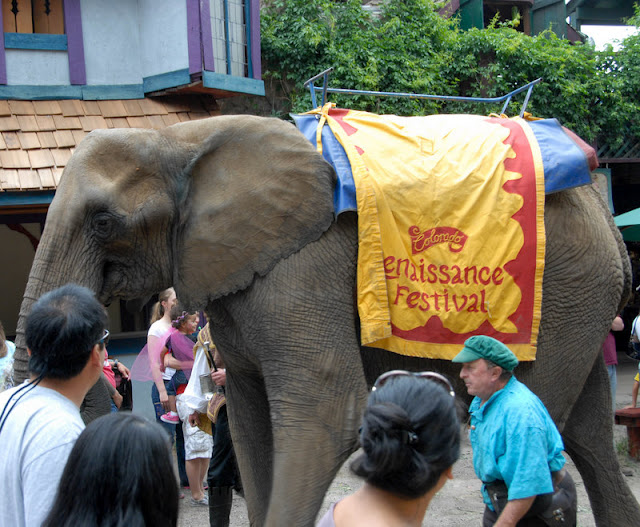 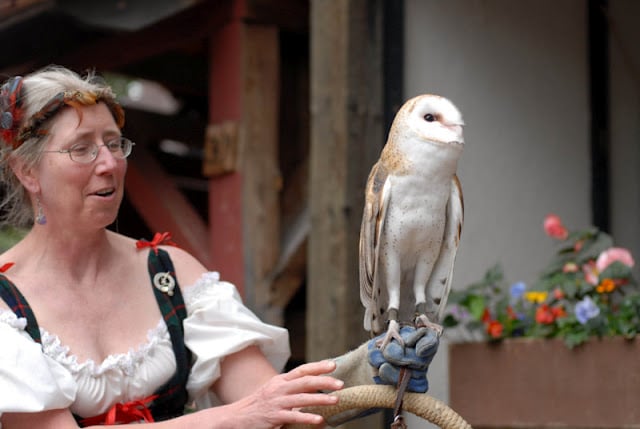 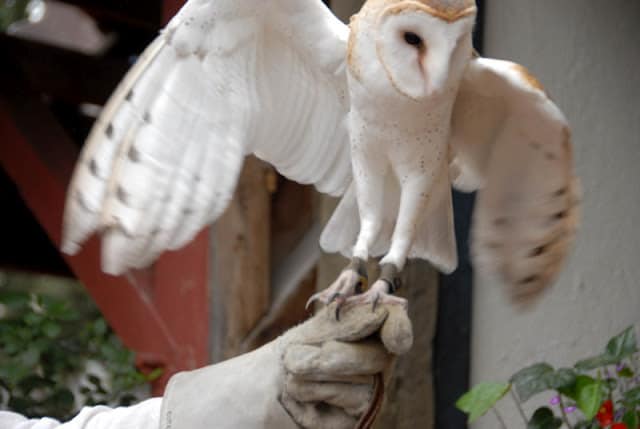 I was fascinated by the crowd.  There were some hard core devotees to the time period.   I was suspicious this was the highlight of the year for them, offering an escapism appealing to their inner era-conflicted spirit.  I also noted many of the performers were the same as last year (my first trip).  I wonder what their deal is.  They joust or juggle fire on the weekend and then what?  What do they do during the week?  How much can a renaissance actor make?  Do they travel around doing this elsewhere?

After hours of the mass of humanity I was done.  The charm of the venue had worn thin.  It was veering toward a cheap carnival side show.  Despite departing totally saturated, feeling I had been living in an episode of Lord of the Rings, I will absolutely go back again next year! 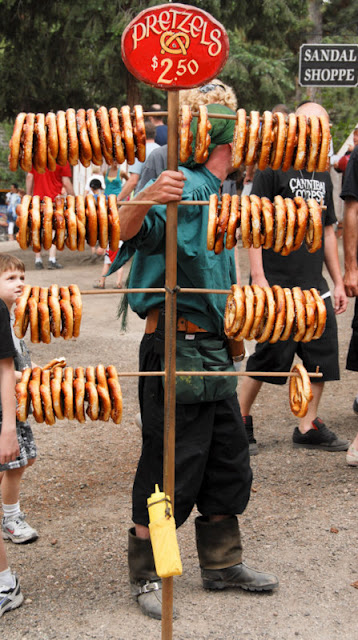