While much of America indulged in Mother’s Day activities such as luxe fixed price brunches with unlimited champagne, I chased Food Trucks, shamelessly, all over the Denver metropolitan area.  This weekend the Food Network’s ‘Great Food Truck Race’ landed in Denver.  For a frantic 48 hours, six food trucks made their way to multiple locations, endured multiple competitions to hopefully survive to go to the next city.

Rewind a smidge.  If you are not familiar with the Great Food Truck Race, it premiered last year and has gathered a devoted following.  Out of nowhere it seemed food trucks sprang onto the urban dining scene in the last two years, providing now en vogue upscale fast food.  A far cry from the historical ‘Roach Coaches’ known best for microwaved food and questionable sanitation, and given all the more cache by Hosea Rosenberg (Top Chef winner gone Food Truck owner), this TV program and its challenges draws fans by the droves.
Having stumbled upon the show last year and being intrigued by their challenges, I wanted to take advantage of the traveling food to see if it was really ‘all that’.  I’ll start by suggesting you bookmark this page and return to view it in late August when the show is on the air (Food Network indicates it will air beginning August 14). I found myself disoriented trying to figure out which trucks are in the race (Denver is stop 3 so there have been eliminations), what their food orientation is, who is ‘good’.  Between watching Twitter, and the internet I was able to get a beat on the who’s who as well as the planned locations, which are advertised to change at the drop of a hat based on curve balls thrown by the program.
Saturday afternoon I was in a section of Denver and drove past a charming street fair noting the Seabirds food truck.  They hail from Southern California and feature local, organic Vegan food.  We decided to pull in and give it a look. 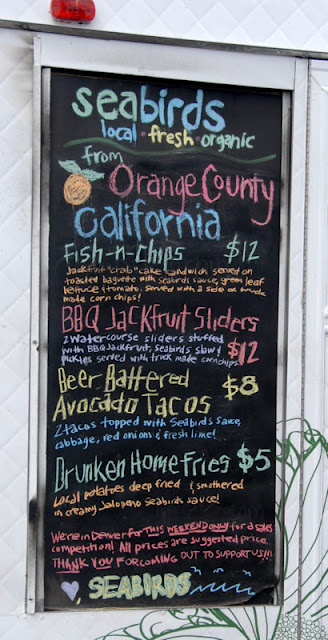 The line was lengthy, the cuisine looked great (albeit all with gluten so I would not be able to sample).  The girl serving was mod and bubbly, coming out of the truck to take orders on the ground level with ‘the people’.  As we lingered looking at the menu, their production crew zoomed in like a hit squad all piling out of a minivan barely slowing to the curb to allow them to disembark.  It was late afternoon, hot and sunny and people were all a bit bedraggled. 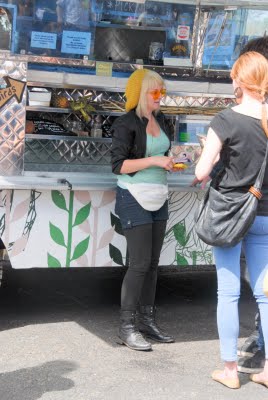 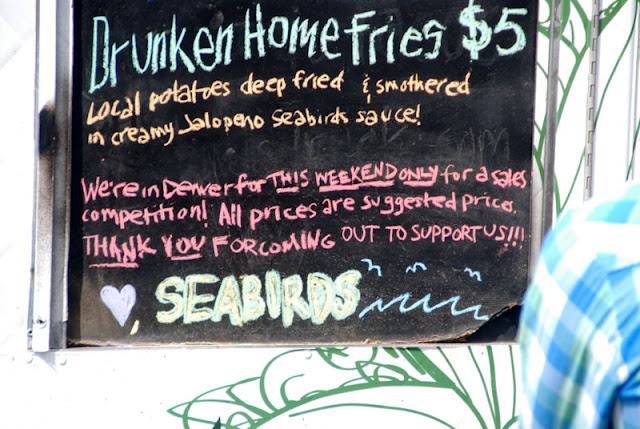 As the camera man cruised the long line, panning with his mammoth camera, a newly arrived patron effervescently approached two guys waiting to the side for their meal.  ‘Woo hoo!  Why isn’t anyone excited?  Have you seen Tyler Florence?  What’s going ON????’.  The parched chaps looked at her grimly and said ‘we have waited in line for over 2 hours.  We are still waiting for our food.  They are really slow’.  ‘ARE YOU KIDDING?’ the over stimulated Miss exclaimed in a diminishing tone herself.  Come to learn from the production crew at the Korilla BBQ (NYC Korean BBQ truck), they had a line of over 350 people on Saturday at one point.  The draw of television.
I’ll give pause here to say my thrust in this article is about the food and the observed dynamic.  I have a blogger friend, Kirsten who writes My Kitchen in the Rockies who originally primed me for this event, approaching it herself like a wartime news correspondent embedding with the Military.  It began with making a t-shirt announcing her blog was welcoming the Food Network’s Great Food Truck Race to Denver and ended up with her signing waivers, being captured on film, being filmed taking photographs for her blog and more.  In between she spryly climbed in and out of the trucks, snapping pics and posing contestants, sampling food and interviewing I suspect anyone she encountered.  I highly suggest visiting her blog anyway, but you will undoubtedly be met with an entire dossier with all coveted details accounted for.  I do not know when she’ll post but I’m sure it will be worth the wait. 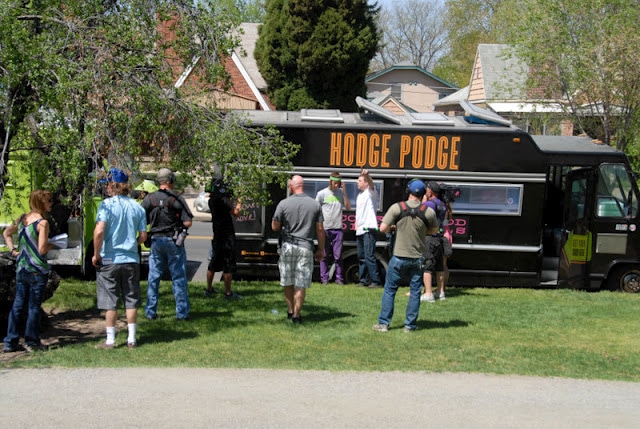 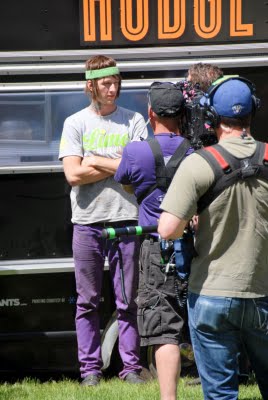 For Sunday several possible locations were listed for the trucks along with the ‘things could change any minute’ caveat.  We tried Wash Park as a starting point to immediately find two of the remaining trucks, Lime (Southern Cal Fresh Mex I’d say and Hodge Podge from Cleveland with more comfort food).  As I sized up their open status, noting them being swarmed by media seemingly directing interviews, I spied two cool characters sitting in the shade.  I approached.  ‘Are you with the production crew?’ I queried.  ‘No, we’re just stalkers like you’, quipped Steve, blogger of GlutenFreeSteve, starting what became a joined-at-the-hip camaraderie for the day.  He and artist partner David and I set out to scour the park for the goods and the scoop.
It turned out these two trucks were to relocate across the park to join Roxy’s Grilled Cheese (no need to declare what they serve; they are from Boston).   When we arrived, I was ready to eat.  It was a bit hard to tell if real people wanting to eat real food could queue up amongst the production aspect but we did at the Lime truck.  As we stood waiting for the purple panted owners of the truck to open, a production representative presented us all with waivers allowing our image to be used non-blurred when the episode was aired.  Being sun-o-phobic I had arrived with a 8 1/2 inch brim hat and enormous sunglasses, looking more like one in the witness relocation program than to taste food, so frankly no one would ever see my face to recognize it.  I signed and hoped the truck would open tout de suite.  I was famished.
As we neared the ordering window, two of the three purple panted boys piled out of the truck on camera announcing John Elway (former Denver Broncos quarterback and businessman) had made a call that only one of the crew could man the truck for the day.  That meant do everything, start to finish.  The other crewmen were told they could do nothing and it was suggested they go ‘get a tan’.

Though only the fifth patron of the day I empathized with Jason, who clearly drew Lime’s short straw.  It was hot, the line was lengthening and he would be doing this solo until 8 or 9 p.m. (it was now a bit after 11).  Our combined group ordered the Beef Taco, the Ahi Tuna Nachos, all three of their limeade drinks and the Corn on the Cob.

Abruptly following our order Jason piled out of the truck announcing the solo chef predicament and indicating the menu was going to be reduced to two specific items which he could make quickly to appease the growing crowd.  Relieved at our timing we took our food to the shade to eat and observe the growing antics.
The ‘time out’ truck crew members were pulled aside for interviews.  The girls from Hodge Podge staged a mock fist fight with the boys from Roxy’s which was derailed by an adorable two year old wielding a plastic fork which he, after goading from the Hodge Podge girls, thrust into the thigh of the Roxy guy.  All captured on film.
GlutenFreeSteve, from here on known as the Man with Moxie, worked the scene like a seasoned pro.  I was convinced by the end of the morning he’d be heading up the production himself.  He was a man on a mission to test the gluten free capabilities of these trucks and wound up on film chit chatting with the late arriving Seabirds truck about their food in this regard.  After several signed forms, I venture you’ll be witnessing this dialog first hand in late August. 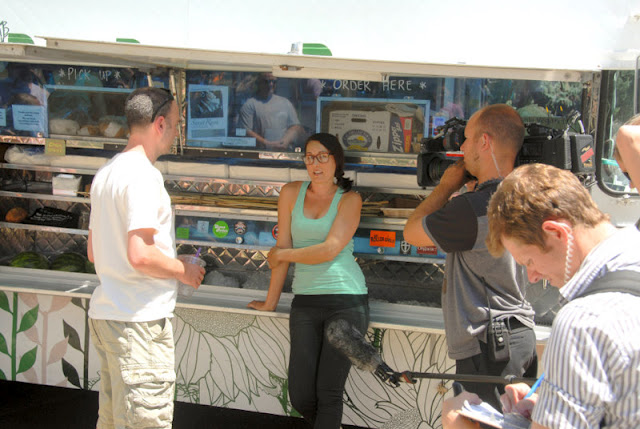 We were full, hot, tired and saturated with behind the scenes insights, anxious to put all the pieces together when viewing the finished program in late summer.  We parted, talking about a premiere party though I think it might take place in Los Angeles with the traction Steve had going with the production company.  He also inquired if Tyler Florence (program host and Food Network icon) frequented the challenge grounds and was told ‘not really’.  Everything was wrapped in a shroud of secrecy, understandably, though it seems their next location ‘had been leaked’ and could be found by searching the internet. 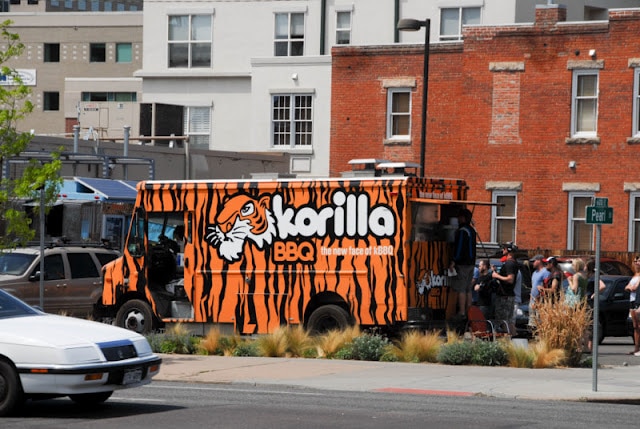 Next stop was the Korilla BBQ truck which took up residence in the parking lot of Steuben’s close to downtown Denver.  I was relieved to see a very short line and comprised purely of Koreans.  I took that as an affirmation of their cuisine quality and authenticity.  Their menu had already been whittled down to one entrée and a drink.  I spoke with the tanning members of the crew who did announce it was a requirement to do nothing, not because they were lazy.  They were cool guys and seemed a good team.  Their one-man-show had lost a round of rock, paper, scissors but it did not go unnoticed that he was cool as a cucumber 4 hours in.  He really presented to have the mettle to stick it out without a drop of sweat passing his brow. 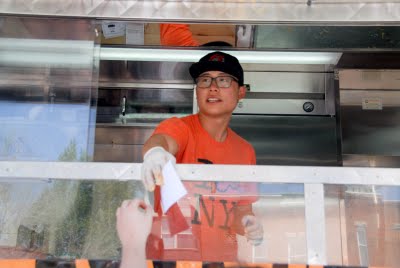 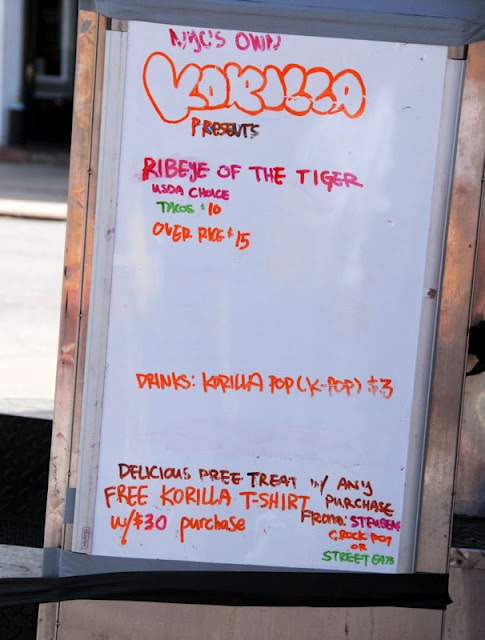 Their dish had gluten so I enjoyed their refreshing orange beverage of their own recipe.  We chatted about friend Kirsten who’d taken over the truck the day before much to their amusement.  They seemed to have a winning formula so I’d venture them to be a team to watch. 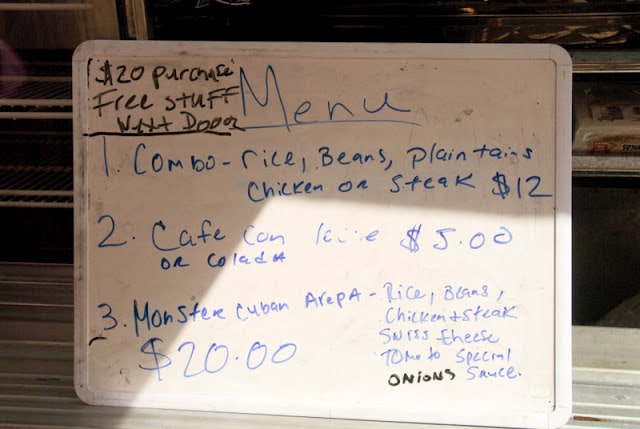 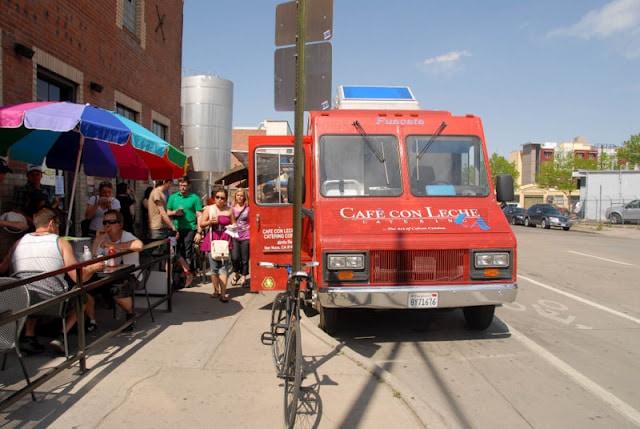 Last stop was Café con Leche and one I was really looking forward to.  They are a Cuban food truck from Van Nuys California.  They camped out at the Great Divide Brewery in the Broadway area of northern downtown Denver, starting a good 4 hours after the rest of the trucks so I’m hoping that works out for them. 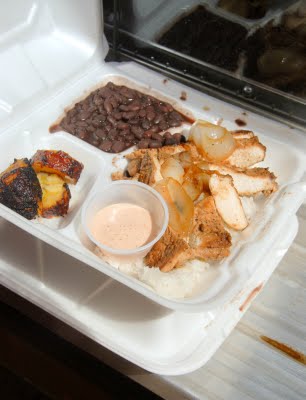 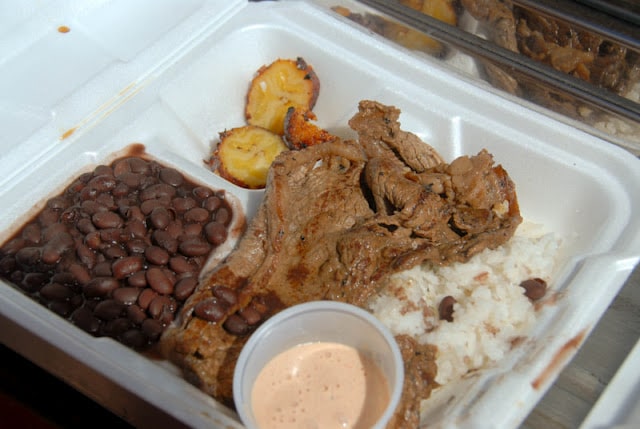 Their crew was warm and welcoming.  I felt instantly at home and valued as a patron.  We ordered one of each of their dishes which were all delicious and gave us credit for some ice cream at a neighboring local truck Quiero Arepas (coconut ice ‘cream’ served with fried plantains).  There was not much of a wait and not much foot traffic.  The Korilla BBQ guys told me they’d had really good luck the day prior so kept their location.  These are sales challenges so location IS everything.  A number of other diners mentioned making the truck rounds so I suspect others like me are cruising all the trucks in the day which I hope will help the Café con Leche truck. 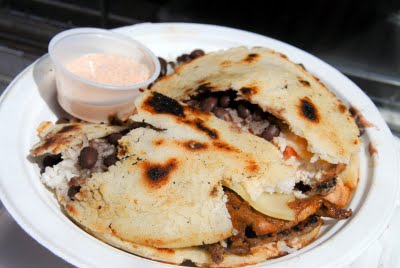 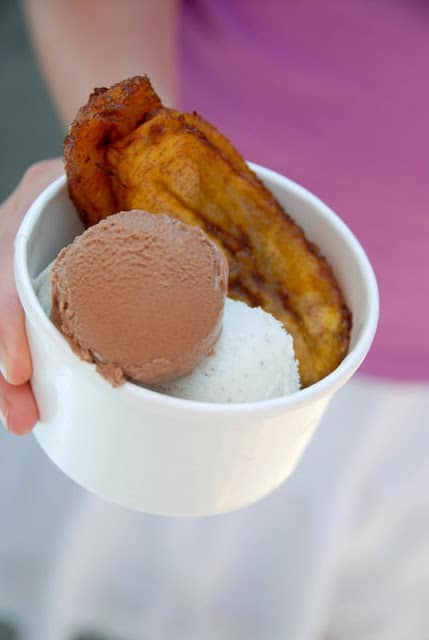 My interest is piqued.  I’ll be curious to watch the show and put all I saw into context.  All the food we tried was fantastic, ‘not your Mama’s Street Food’ so the competition is fierce.  I definitely walked away with some favorites and some I’ll be rooting for.
Check the internet and keep your ear to the ground.  They still have more cities to hit and if they are near you, check them out.  The food will not disappoint.  Watching how it all comes together is not to be missed either.
« Bacon-and-Egg Salad Sandwich with Radish Sprouts
Backyard Salad: My Foray into Urban Foraging »