Snow in July sounds great, doesn’t it? Especially in the form of this updated vintage recipe for Lemony Snow Pudding with Rose Custard Sauce! Creamy custard sauce with a dollop of light meringue ‘snow’.

Snow Pudding. I would bet there is not a soul at this point of the summer that doesn’t find that name enticing. When rooting around in my Grandmother’s recipe box recently I came upon this recipe on a handwritten, well-weathered recipe card. It took a fair amount of scrutinizing to tease out the method from the shorthand every cook develops when recording recipes. Having never heard of Snow Pudding I was initially at a loss, not conceiving what form the final desert would take either. But the idea of ‘snow’ in this miserably hot month was all the incentive I needed to figure it out!

The dessert might be more aptly dubbed Cloud Pudding as the main dish is a chilled light, lofty meringue. It is airy and whimsical. Well complimented by the thick custard sauce that I chose to make rose-flavored, this dessert is like no other I’ve had. It is a perfect cool, light treat in the midst of summer heat.

I never look around on the internet before developing or featuring a vintage recipe, liking to keep my creative vision unswayed. I do however Google afterwards sometimes wondering if anything similar is on the web, especially with more unusual or unfamiliar vintage recipes such as this one. I did so with this recipe. Much to my surprise and delight, I found several references to it including a definition in Merriam-Webster’s dictionary!

I particularly loved this note in a version on Epicurious.com: “Judging by the incredulous, delighted looks on the food editors’ faces when they swallowed their first spoonful of what is essentially cold, airy, whipped lemonade, this 19th-century dessert deserves a renaissance. The warm, sunny sweetness of basil infuses the accompanying custard sauce.”

I have a particular soft spot for vintage recipes, feeling they lie in peril of extinction with the onset of cyber recipe-keeping. My heart was warmed to be in such good company in keeping this recipe alive. I’ve included some of the links at the end of this post, most of which reference memories of Grandmothers making this recipe, both in the U.S. and in the U.K. Funny how recipes ‘disappear’ from the current lexicon but can be found again thanks to the internet.

Other Snow Pudding recipes from around the web:

Snow Pudding {Baltimore Sun} Note: the poster of this recipe references remembering their Grandmother making this pudding from her 1941 Knox Gelatin cookbook. 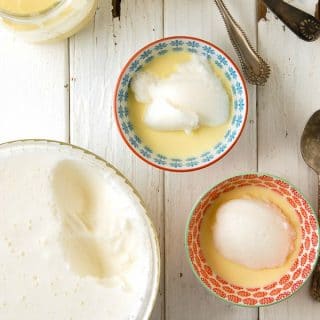 Ingredients for the Snow Pudding:

Instructions for the Snow Pudding:

Instructions for the Rose Custard Sauce:

*The color of the sugar will tint the pudding. **Note on use of raw eggs: This recipe uses raw egg whites. I would recommend using pasteurized eggs which should remove any Salmonella risk. The statistics on contracting Salmonella are pretty slight but of course follow your own judgment. Note: Most of the ‘Total Time’ is allocated to chilling the dessert components.