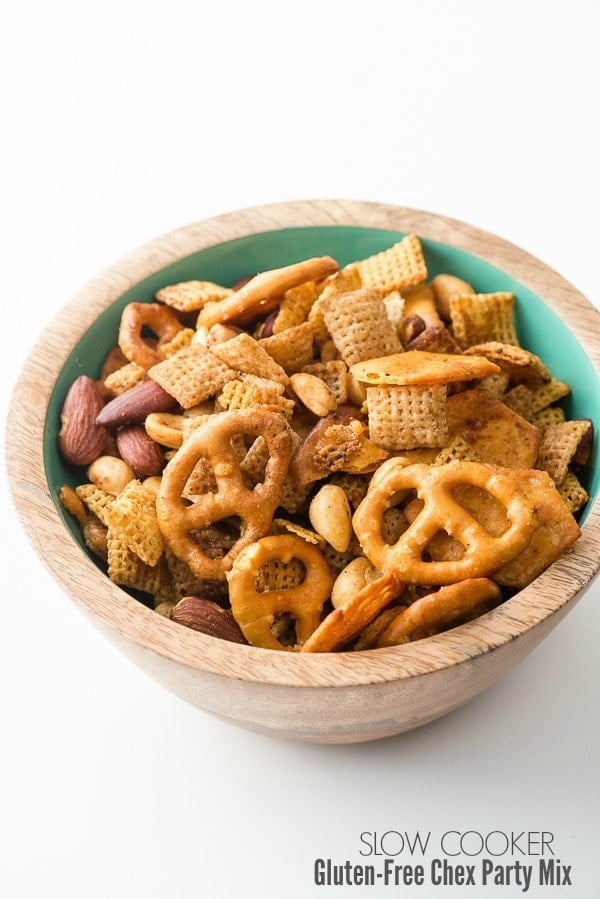 Long weekends and holiday breaks always seem to demand more snack options. If we get involved with lengthy game playing (Catan is a family favorite and can go on for hours) or movie marathons, grazing rather than meal-eating seems to take over. Today’s recipe is a tried-and-true party favorite but I’ve made it totally gluten-free:  Slow Cooker Gluten-free Chex Party Mix.

I love almost anything I can do in my slow cooker for a few reasons. It usually allows fixing and forgetting it, such as with soups. The ingredients can be loaded into the slow cooker and left on their own to cook for hours yielding a tasty prepared dish. 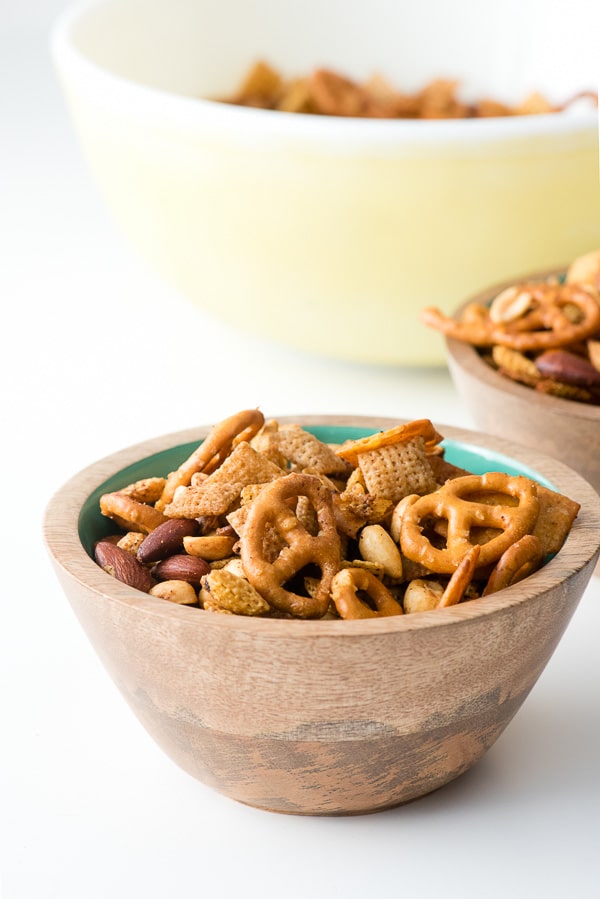 Using the slow cooker also leaves the oven open for other recipes to be cooked. In the summer, it accomplishes the same end result as using the stove top or oven without heating up the kitchen (for the recipes appropriate for the slow cooker). 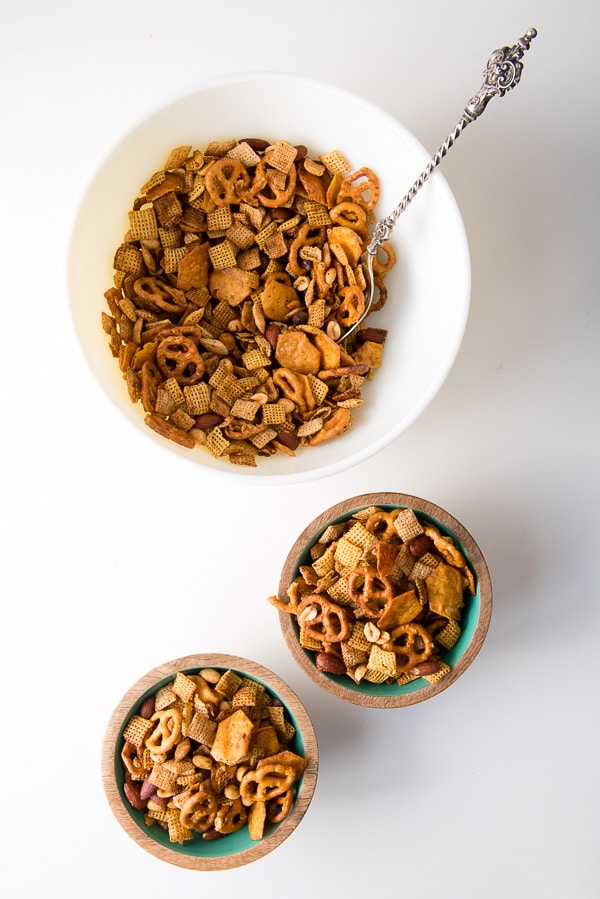 I feel so fortunate many mainstream companies have jumped on board the gluten-free bandwagon so classics like Chex party mix is something everyone can now make and eat. There are multiple versions of the party mix but I stuck to what I love in the ingredients and fortunately it was easy to find the ingredients I wanted to use in gluten-free form. 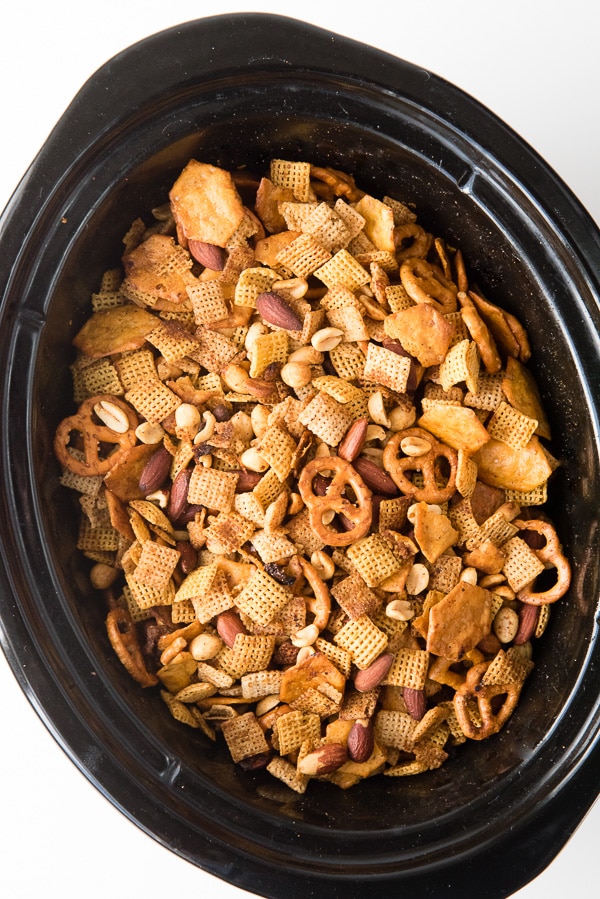 This Slow Cooker Gluten-Free Chex Party Mix uses two types of Chex (rice and corn), pretzels, cheese crackers, cocktail peanuts, smoked almonds with the savory seasonings we know and love. I know some versions use small bagel chips too which are also available in gluten-free form. And guess what gluten-eaters? You can substitute equivalent gluten alternatives if you wish to. I believe all Chex cereals are gluten-free now (not gluten version) so the pretzels and cheese crackers are the only ingredients that you’d swap out.

My preferred way to cook the mix is on low temperature with three layers of paper towels between the lid and the slow cooker insert. This absorbs some of the condensation while it cooks. Even so, if you sample the ingredients while the mix is cooking you may find the consistency to have become soft (I did with one of the Chex types and the cheese crackers). Never fear however because as soon as the lid is removed and when the mix cools everything will become crunchy again! 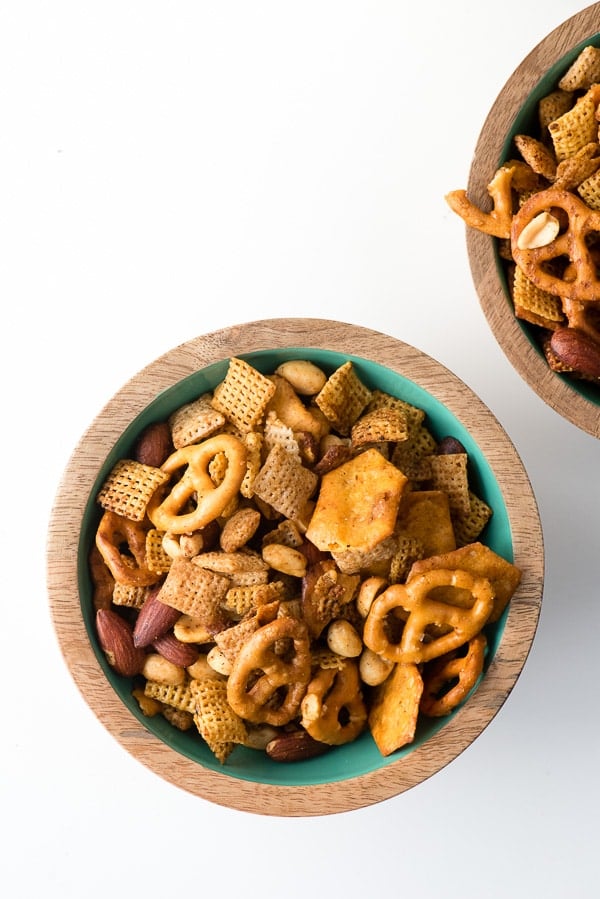 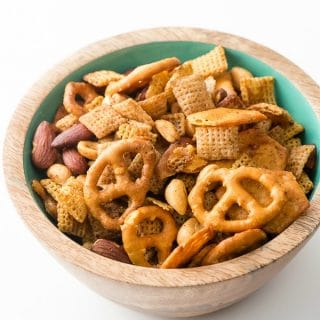 This classic party mix is changed up by both cooking it in the slow cooker instead of the oven and all the ingredients are gluten-fee. It's easy to prepare and perfect to have on hand for snacking or entertaining. For those wishing to make a GLUTEN version: substitute gluten cheese crackers and pretzels. All other ingredients are naturally gluten-free.
4.75 from 4 votes
Print Save Recipe Recipe Saved! Pin Rate
Course: Appetizer
Cuisine: American
Keyword: gluten-free chex party mix, slow cooker chex party mix
Prep Time: 5 minutes
Cook Time: 1 hour 50 minutes
Total Time: 2 hours 15 minutes
Servings: 22 1/2 cup servings (11 cups party mix)
Calories: 189kcal
Author: Toni Dash