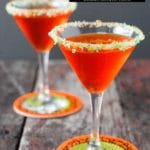 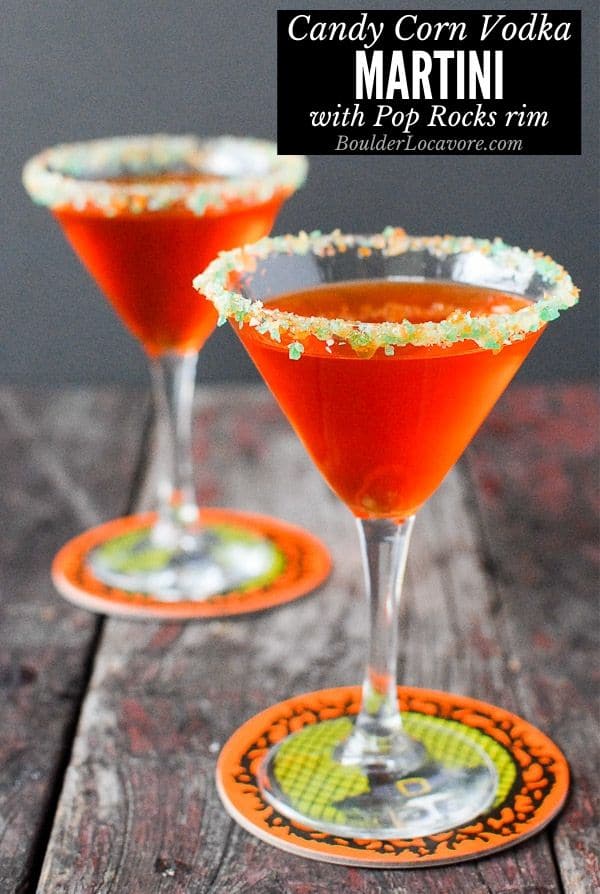 Whether you love candy corn or hate it, this Candy Corn Vodka Martini recipe will become an adult Halloween Party win!

An easy batch of homemade Candy Corn infused vodka, some homemade Vanilla vodka, a few Pop Rocks and the favorite party is at your house. 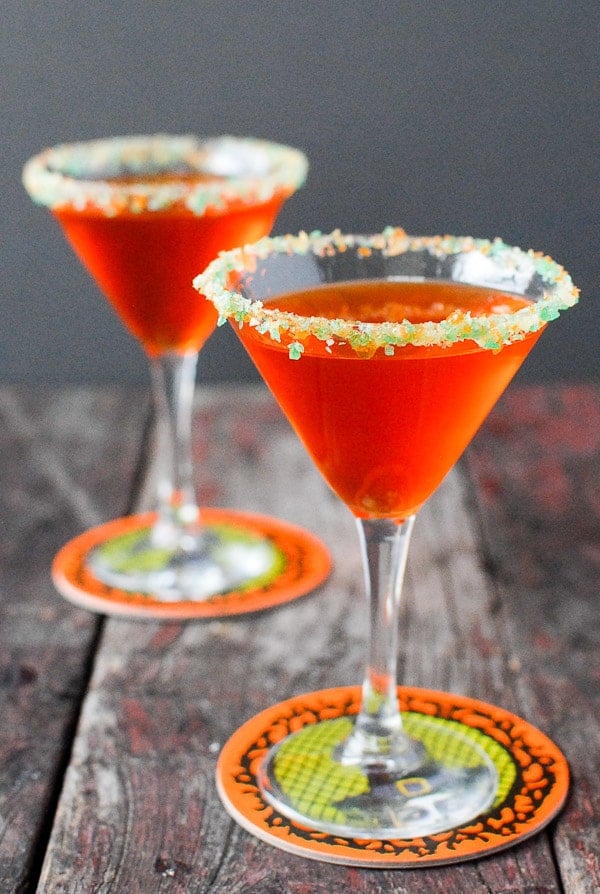 That idea will either excite you and have you running for the door.

Trust me, it’s easy and fun to make. And taste’s great.

The polarizing thing about Candy Corn is how sweet it is. For many, it’s just too much.

The fascinating thing about turning it into vodka, is the sweetness goes away. Totally.

What’s left if the delicious buttery flavor found in candy corn. And the color. 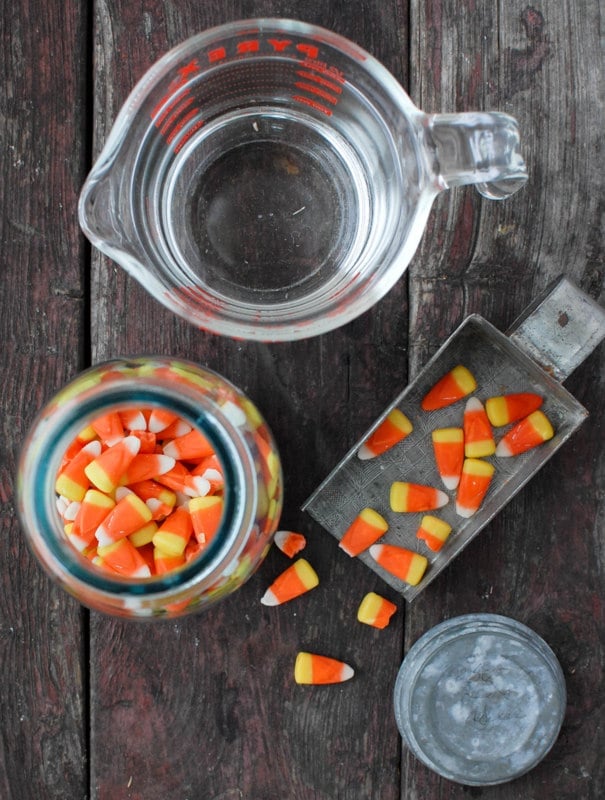 This is one of the easiest liquor infusion recipes you’ll ever make.

It’s also one of the creepiest to watch.

Shortly after the candy corn and vodka are combined, weird alien formations begin to form.

If you ever great Magic Rocks in your childhood this recipe will give you a flashback.

You aren’t doing anything wrong.

In the end a clear orange vodka emerges! 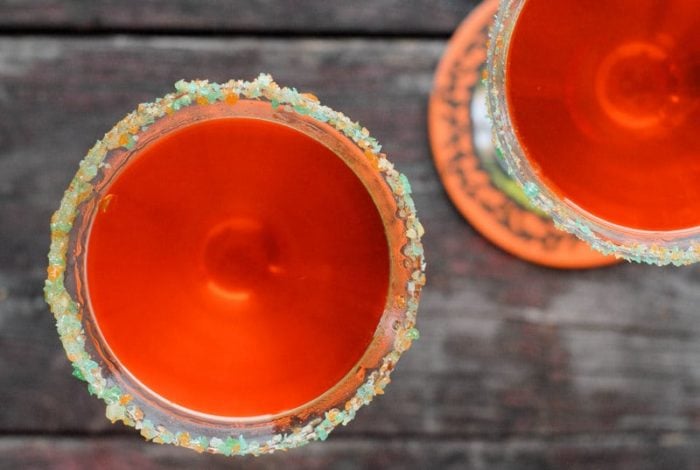 This is a very easy recipe. It requires candy corn and unflavored vodka.

The candy corn dissolves into the vodka giving the vodka a warm buttery flavor without the sickly sweet sugar.

STEP 1: Combine the candy corn and vodka in a glass jar with lid (I used a quart Mason jar).

STEP 3: When the candy corn is fully dissolved, strain through 2 layers of cheesecloth. 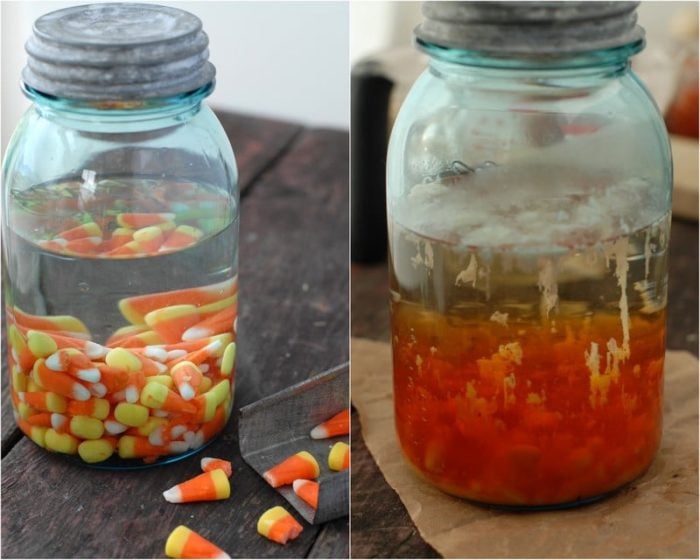 As the Candy Corn vodka infuses it starts to look like a science experiment. Don’t be scared! Then this passes the vodka turns a wonderful color and any candy sendiment is filtered out before using.

I wanted the best possible flavor and infused the vodka for 4-5 days.

After five days the vodka was the most sublime color of Fanta-orange.

It separated perfectly, leaving a bit of residue on the bottom which is easily strained.

I was thrilled that it retained the candy corn flavor, without the sweetness.

The vodka can be used as soon as the candy corn has dissolved. This takes 1-2 hours.

So if you get the impulse and need the vodka faster than 4-5 days, whip up a batch!

Taste for flavor and allow it to sit as long as possible. 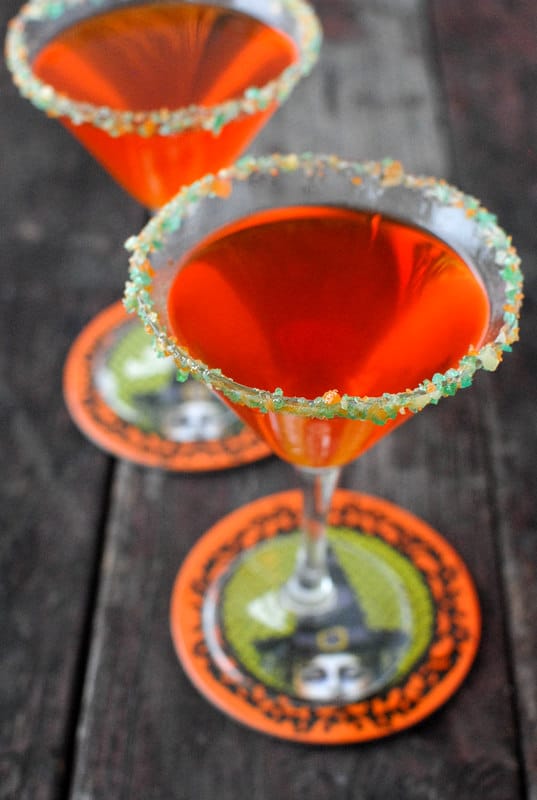 How to Make Vanilla Vodka – Step-by-Step

I decided to make a micro batch of Vanilla Infused Vodka to round out the buttery flavor for a final cocktail.

All it required is one vanilla bean and unflavored vodka.

This homemade method is easy and have wonderful flavor. If you have the time I recommend making it. 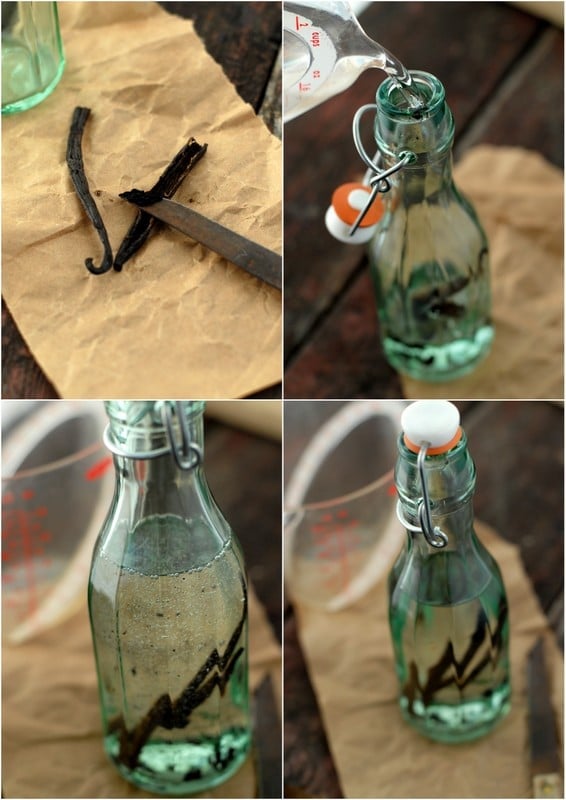 STEP 1: Combine the vodka and vanilla bean (sliced open and scraped; include the scrapings) in a sealed glass jar.

STEP 3: Taste after 3 days and use or allow to continue to infuse.

NOTE: if you need it faster, taste it earlier than 3 days. If you like it use it. Otherwise allow to infuse longer. 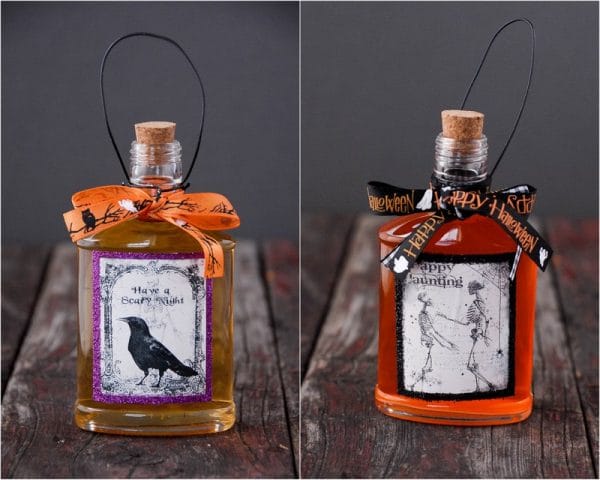 As with all Martini recipes, this Candy Corn Vodka Martini is all booze.

This is a festive cocktail, a novel cocktail, but also one that will feel like more of a Trick than a Treat if not consumed with respect!

Pop Rocks are a fun addition to this cocktail glass rim. No one will guess that’s what they are until they take a sip!

Do not allow the Pop Rocks to get wet before serving or they will not pop.

TIP #1: The Pop Rocks can be used ‘as is’ or processed through a blender or a mini chopper (mini food processor) to make a finer, more sugar-like texture which still pop.

TIP #2: When Pouring the Candy Corn Martini ingredients into the rimmed glass, be careful not to wet the Pop Rocks or they will begin to pop.

The Pop Rocks used for these vodka martinis are ‘Pumpkin Patch Orange’. They are a blend of orange and green.

You can find Pop Rocks at certain drug stores or ‘big box’ stores like Target or Walmart. Call ahead to make sure they have what you want.

Also novelty candy stores will sell them. A number of sources sell them online too. 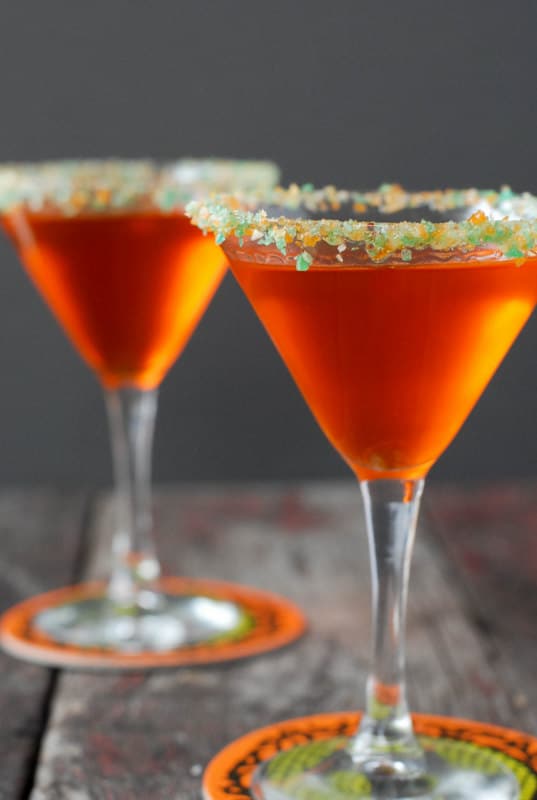 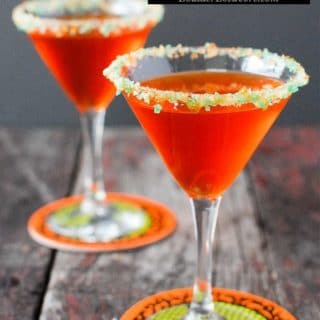 Candy Corn Vodka: The ratio I used for this infusion was 2 to 1, vodka to candy corn. You can tailor your desired batch size based on this ratio. Plan to make at least 5 days before making the Candy Corn Martini for optimum flavor. Vanilla Vodka: This vodka infuses quickly and is a warm, flavorful addition to a number of seasonal cocktails.

This Candy Corn Vodka Martini recipe is always the hit of every Halloween party!