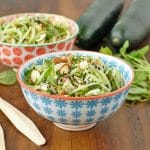 Spiralized Cold Cucumber Noodle Salad is light and refreshing in any season. Watercress, mint and a homemade toasted sesame-ginger dressing bring fresh flavor and crunch to this healthy recipe.

I was walking through the produce section of Whole Foods when cucumbers caught my eye. I actually stopped and stared for a moment to see if maybe they were some other exotic produce. Cucumbers seem to be a perfect summer type of vegetable; cool, refreshing, hydrating and subtle on flavor. It was like running into an unexpected guest at a party that seems totally out of place.

I bought some. I’ve been loving my Spiralizer and am compelled to find more and more things to make with it. I love a bit of whimsy in life and my food, and the Spiralizer delivers. It keeps me interested and from falling into a food boredom, eating expected winter foods repeatedly, waiting until spring and summer unveil their bounty to spice up my menus.

One of my first recipes after getting my Spiralizer was a Cucumber Melon Spa Salad.  Cool cucumber noodles winding messily around honeydew and cantaloupe melon balls at their peak of sweetness. Is there anything you could hope for more on a steamy summer afternoon? This time I had visions of an equally simple, clean salad but with an Asian twist in a light dressing.

The large cucumber effortlessly transformed into what looked like a green variation of Rapunzel’s hair, twisting out of the machine endlessly, falling into heaps of ringlet curls. I tossed them with torn and chopped watercress and fresh mint, sprinkled with sliced almonds for crunch and warmth of flavor.

Slices of ginger soak for a bit in a dressing of toasted sesame oil, rice vinegar, and freshly squeezed mandarin juice. The dressing is light but adds a toasty flavor to the hydrating, crunchy salad. The salad is healthy and very lean on the calories; definitely something to usher in the healthier habits of the New Year and just as satisfying again in the heat of summer.

If you’ve tried this Cold Cucumber Noodle Salad or any other recipe on BoulderLocavore.com please don’t forget to rate the recipe and let me know where you found it in the comments below, I love hearing from you! You can also FOLLOW ME FACEBOOK, TWITTER, INSTAGRAM and PINTEREST to see more delicious food and what I’m up to! 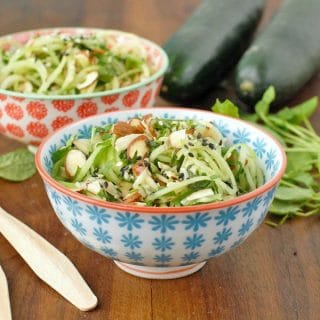 The cool hydrating effect of this cucumber noodle, watercress and mint salad is irresistible in any season. It’s perfect for a light, low calorie meal or as a refreshing side salad. The warmth of Toasted Sesame Oil is delivered without much added to the dressing; just enough to add flavor but not to overtake the delicate cucumbers.
5 from 1 vote
Print Save Recipe Recipe Saved! Pin Rate
Course: Salad
Cuisine: American
Prep Time: 20 minutes
Total Time: 20 minutes
Servings: 1 large main dish salad or 2 side salads
Calories: 298kcal
Author: Toni Dash
Prevent your screen from going dark

Ingredients for the Toasted Sesame-Ginger Dressing:

To assemble the salad:

*To prepare cucumber noodles without a Spiralizer, try this method. Additionally I purchased a vegetable slicer intended for green papaya at an Asian supermarket for around $5 which could be an option.