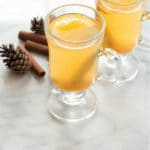 Mulled Apple Cider delivers warmth and cozy spices for the cold weather season. This homey brew is made in a slow cooker for an easy recipe! 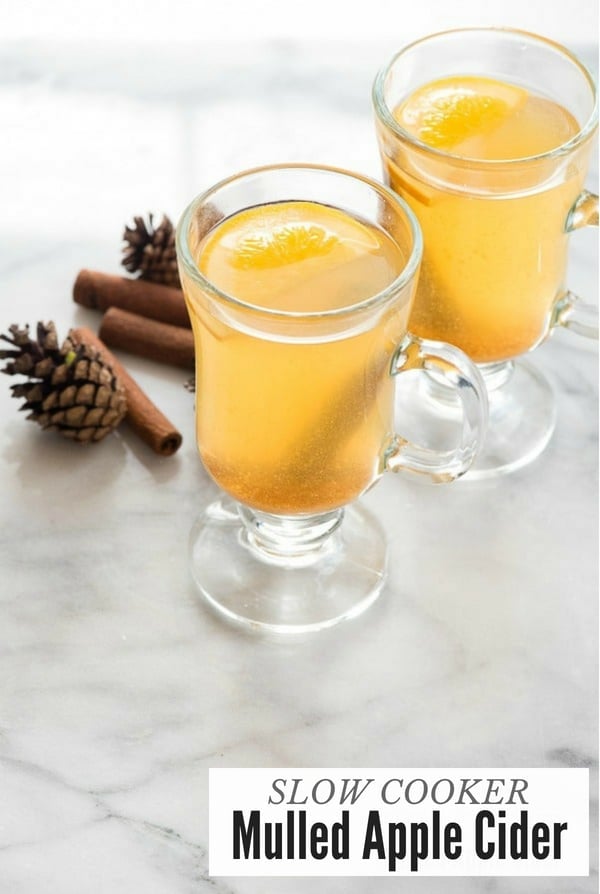 With fresh apple cider readily available, don’t miss the opportunity to whip up a batch of Mulled Apple Cider in the slow cooker.

Whole spices, fruit and cider simmer to make a comforting hot drink to fight the chill of fall and winter. 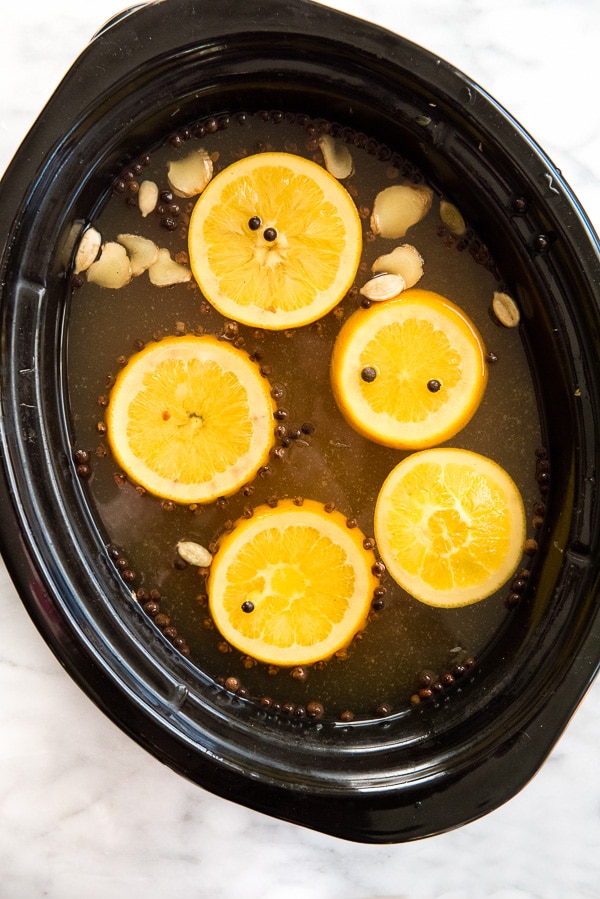 What is Mulled Apple Cider?

Hot Mulled Wine is winter tradition originating in Northern Europe. Red wine is heated and combined with aromatic spices to make a cozy beverage to sip fireside in the winter.

An example of this is a Scandinavian version of mulled wine called Glogg. It’s delicious and the spices can be combined (dry) with a bottle of wine and the recipe as a great hostess gift!

For youngsters and those preferring not to drink alcohol, mulled apple cider is a great alternative! Anything taking advantage of the fix-it-and-forget-it ease of the slow cooker is my speed this time of year too.

Apple cider is made of fresh apples ground into a pulp and juice is extracted from the pulp. This is why apple cider is often cloudy or labeled as ‘unfiltered’. Because of the extra apple matter, apple cider always must be refrigerated and is perishable.

Apple juice is solely juice from apples with no other part of the apples. It’s clear and a golden color.

TIP: apple cider can be frozen! If you can find it freshly made in the fall, stick a container in the freezer ensuring some space at the top for expansion when freezing. You can enjoy it and use it in recipes all year! 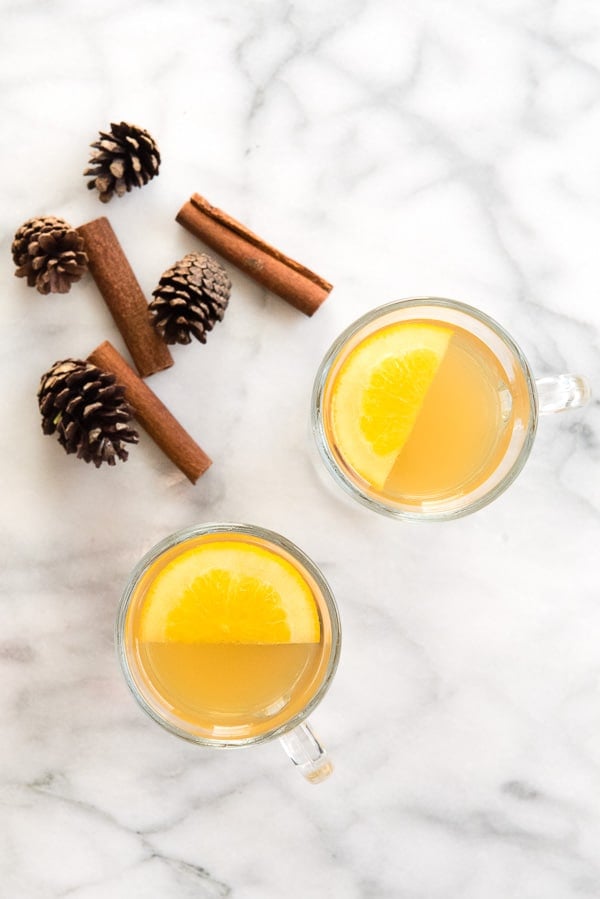 What Ingredients are in Mulled Apple Cider?

I love the availability of fresh apple cider at this time of year. Personally, I love the more rustic quality of the apple particles that swirl around as you drink it.

It has a naturally sweet flavor as well, making it easy to build on for this delicious slow cooker mulled apple cider recipe.

This recipe uses whole spices for a few reasons:

If you don’t want to deal with straining the cider, the allspice berries, cloves and cardamom pods can be wrapped in a sachet made of cheesecloth, tossed into the cider and then easily removed once the cider is done simmering.

Personally, I love the look of clove-studded fruit and find adding the cloves to the rind of the orange slices to be both pretty as well as it keeps them out of the way of scooping into a mug!

TIP: to easily insert the cloves into the orange slices, make a small hole with the sharp end of a bamboo skewer then insert the clove. This helps prevent the clove stem from breaking when being inserted. 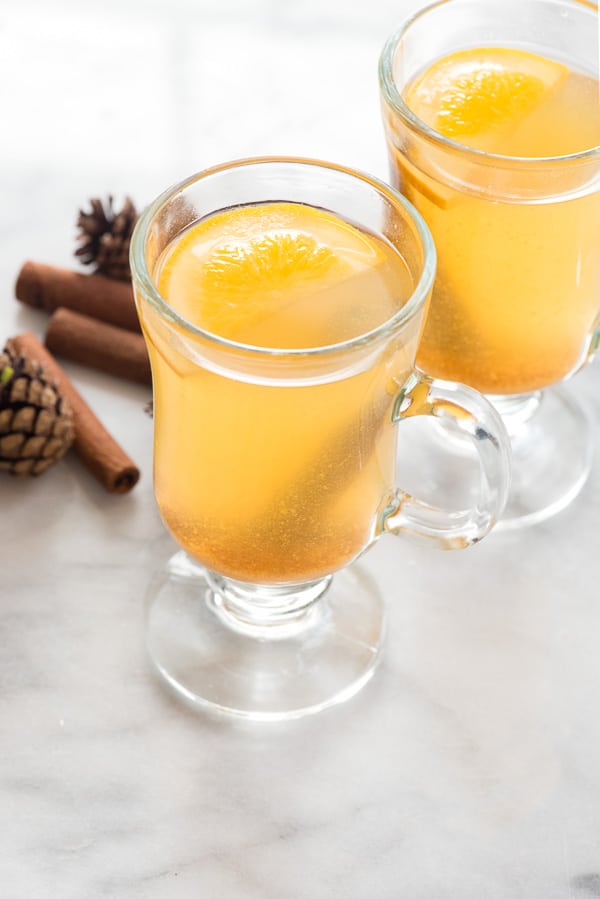 How to Make Mulled Apple Cider in the Slow Cooker

This almost seems silly to include. Combine all ingredients are added to the slow cooker and cook on LOW for 3-4 hours.

Strain the mulled apple cider through a fine mesh sieve before serving.

OR line a larger strainer wtih a double thickness of cheesecloth and strain.

Can Mulled Apple Cider be Spiked?

Why not?! I suggest adding your preferred liquor to individual servings (bourbon, whiskey, rum would all be great). By doing so the base mulled apple cider is available for those not spiking it.

Keeping it available in the slow cooker on warm is great for gatherings and parties!

I love making hot drinks in the winter using the slow cooker. Slow Cooker Hot Buttered Rum is another favorite. It is made adding the alcohol in serving cups so those wishing the warm, buttery drink booze-less can enjoy it too ‘as is’ from the slow cooker. A dash of rum extract can also be added for the warming flavor of rum and no alcohol.

Slow Cooker Vampire Punch is a fruity easy recipe for Halloween (but great any time really) with a spicy addition! This punch can also be served cold.

Slow Cooker Mulled Wine is a great option for adult parties for a soul-warming libation. 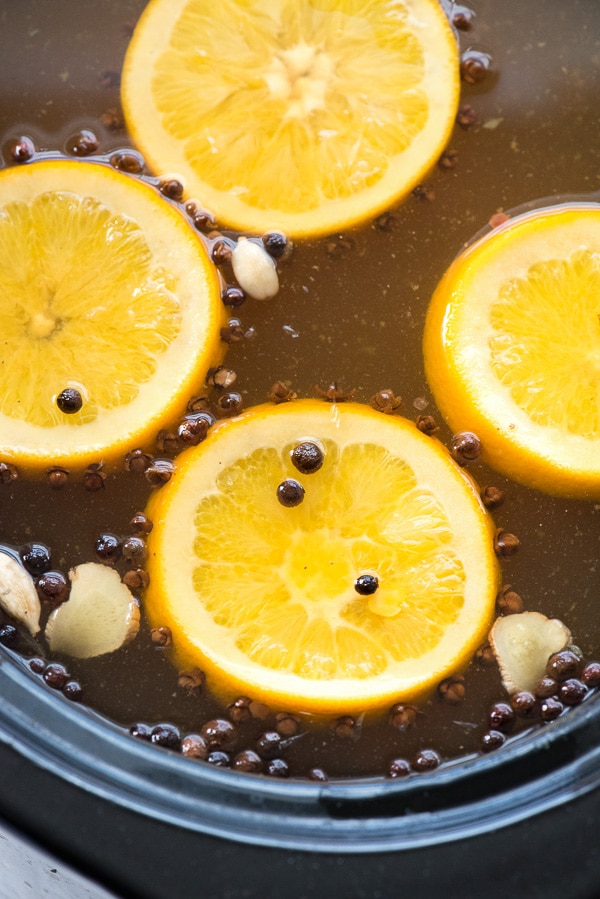 There is nothing better than coming inside after a chilly outing to pick up a Christmas tree, decorating the house outside with lights or some holiday shopping, to be greeted with a house smelling of spiced cider! I really think it is the homiest smell ever.

It’s great to make up a batch before going out to do some Christmas caroling too (does anyone do that anymore?) so it’s piping hot when you return home.

If you’ve tried this Mulled Apple Cider recipe please RATE THE RECIPE below! 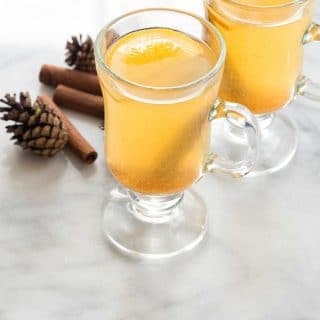 « Peppery Sausage White Bean Kale Soup
Dry Ice: Everything You Need To Know (Buying It, Using It, Storing It) »