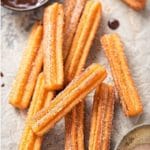 Hot fried cinnamon-sugar Churros are a taste treat that is easy to make at home! Light, fluffy on the inside with a crisp sugary crust. This family favorite recipe inspired by Disney churros can be made gluten-free or with regular flour.

There is nothing quite as delicious as hot, fried Churros rolled in cinnamon sugar!

The inspiration for this recipe came from a trip to Disneyland where the churros can be found everywhere.

If you don’t see a Churros stand (there is one in every land) you’ll smell them.

The aroma of sugary, cinnamon fried dough is absolutely intoxicating!

Now you can make this easy Churro recipe at home! They make anyplace the happiest place on earth.

Churros are fried pastry dough rolled in cinnamon and sugar.

They are usually long sticks but can be made in ‘bite’ sizes too.

They originated in Spain and Portugal and have spread across the world presenting different versions.

No matter where you find them the hot, sweet churros are delicious for a special treat!

It was impossible to miss them at Disneyland….

They can be made in any length.

You’ll see when making longer versions they tend to snake around in the hot oil rather than staying stick-straight.

They are fun to watch take shape and even better to eat hot out of the pan!

The needed ingredients are simple and in your kitchen right now!

All Purpose Flour. Regular or gluten-free measure-for-measure flour can be used.

Canola or Vegetable Oil. You’ll need enough oil to be at least 1 inches of oil deep in the pan you are using.

The original inspiration for this recipe was making a gluten-free churros recipe for people to enjoy at home.

As fabulous as Disney is for gluten-free travelers (and it is) the churros there were not available in a gluten-free form when I developed this recipe.

This recipes makes up for it. AND you can make them anytime you desire.

It has also been tested with regular All Purpose Flour and is just as delicious!

Fast forward 7 years after I developed and shared my recipe, and Walt Disney World has released their recipe to the public!

The Disney Churro Bites recipe makes 1-inch long Churros, not the long sticks sold at the stands in the parks.

I was thrilled to see it and see my recipe is almost identical to their original recipe!

So whether you are gluten-free or a gluten-diner missing Disney, my recipe will bring you that familiar flavor and some joy!

How to Make Churros – Step-by-Step instructions

For detailed instructions refer to the printable recipe card at the end of the blog post.

Pot Size. The churros should be 4-6 inches in length (unless you are making them bite-sized) so select a pot large enough.

Have all Everything set up Before Frying. Frying goes quickly so having all supplies where you need them is key:

In a large heavy pan heat oil. Equip the pot with a candy thermometer (or use and Instant Read thermometer) and heat until the oil temperature is 350 degrees. Make the dough while the oil heats.

In a medium saucepan over medium-high heat, combine the water and butter. Bring to a boil to melt the butter. Whisk to combine.

Add the salt, 1 tablespoon of sugar; bring to a boil.

Add the flour and stir vigorously with a wooden spoon or heat safe silicone spoon until a stick dough is formed (1-2 minutes). Immediately remove from heat.

Place dough in the bowl of a stand mixer. On high speed, add the eggs, one at a time allowing the egg to be fully combined before adding the next one. Beat on high speed until a shiny smooth ball of dough mixture forms (2-3 minutes).

Combine cinnamon and the remaining sugar in a baking dish or pan; stir together to make the cinnamon sugar mixture.

Equip the pastry piping bag with the large open star tip. Fill the bag with dough.

Pipe dough in 4-6 inch long strips of dough into the hot oil.

NOTE: the churro dough should NOT touch while frying so fry churros or a few in a batch.

Rotate the dough for even cooking. They should be dark golden brown when completely cooked. Do NOT overcook.

When cooked remove with a slotted spoon or a strainer and place on the paper towels to allow any excess oil to drain.

When cool enough to handle (a few minutes after draining) hold the cooked dough over the cinnamon-sugar dish and hand sprinkle the sugar mixture on all sides of the dough. Tap lightly to release any excess back into the pan.

Do not allow the Churros to touch while frying. Cooking the dough in small batches or one at a time ensures the best result.

Use a heat-proof spoon or strainer to turn the Churros while cooking. As the underside become golden brown rotate the frying dough to ensure even cooking.

They are ‘done’ when they are dark golden brown.

Best when served hot and freshly made. Though leftovers are still delicious (keep in an air-tight container), eat them as soon as they are done for best results. 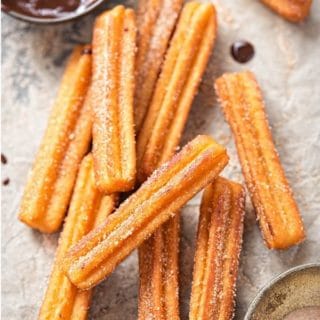