Juicy, tangy Slow Cooker Pulled Pork Sandwiches with Radish Slaw is an easy, gluten-free recipe that is great for a crowd or to have leftovers to freeze! The pork takes about 15 active minutes from you and the slaw can be made even faster by purchasing prepared grated ingredients! 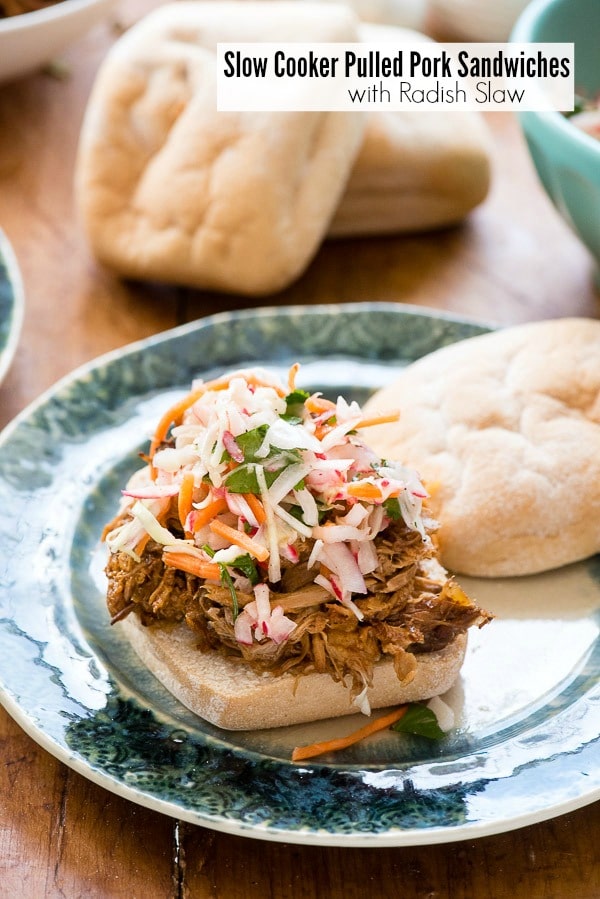 This post is sponsored by BFree, gluten-free baked goods. All opinions are my own.

The seasons are changing from the chill of winter with cozy comfort foods to the dog days of summer and the grilling season. Despite this, one thing remains in high use in my kitchen: my slow cooker. Most people think of slow cookers for more cold-weather, rustic foods like soups and stews but I’m here to tell you they are fantastic in the summer too! They don’t heat up the kitchen and you can add ingredients, go off to have fun and come back to a fully cooked meal with no effort. I’m sharing a favorite year-round recipe today for Slow Cooker Pulled Pork Sandwiches with Radish Slaw that I think you’ll love! 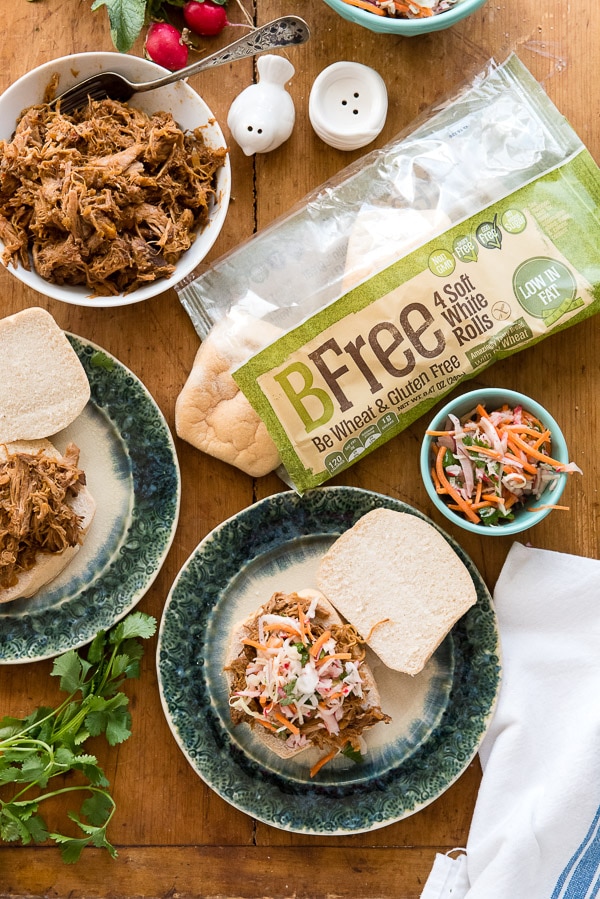 I’m extra excited to share this post today. First, I l.o.v.e. this recipe for pulled pork. It’s super easy and the sauce is so delicious. Tangy, sweet, a bit spicy, making the pork so flavorful. Secondly, I’m partnering with a favorite gluten-free company, BFree Foods, to share one of their products I love; their Gluten-Free Soft White Rolls. 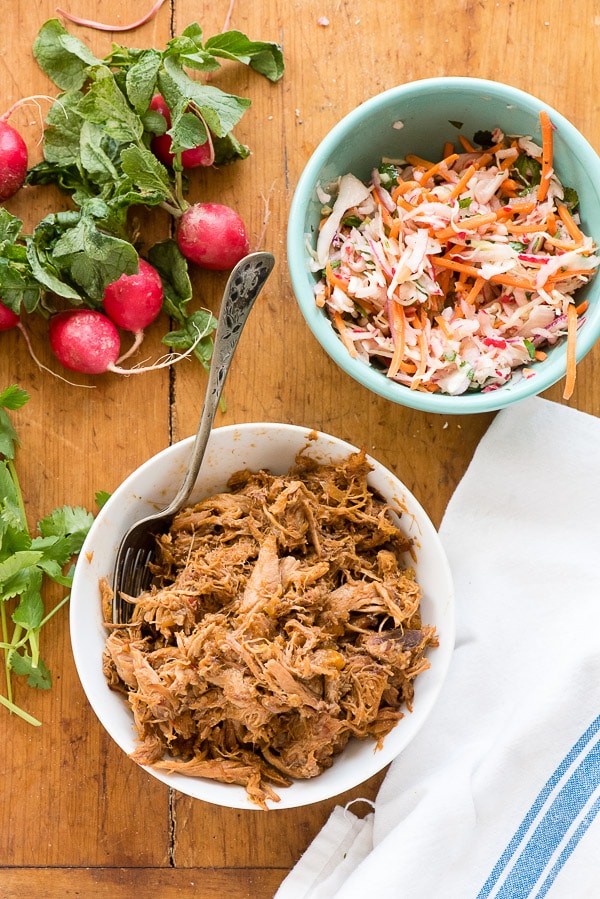 You may recall last fall I shared a Thanksgiving Leftovers Bacon Provolone Pita Pockets recipe (not just for Thanksgiving, it can be made all year long!) with BFree Foods gluten-free pita bread. I was thrilled to have found BFree gluten-free foods last fall as they allowed me to have pita bread for the first time in over a decade!! Very exciting!

My freezer is now full of BFree products. I love them for multiple reasons. They have gluten-free products I’ve never seen elsewhere, such as the pita bread and a selection of pliable wraps that are tasty and do not fall apart. Their rolls and bread are sturdy yet with great flavor and texture. 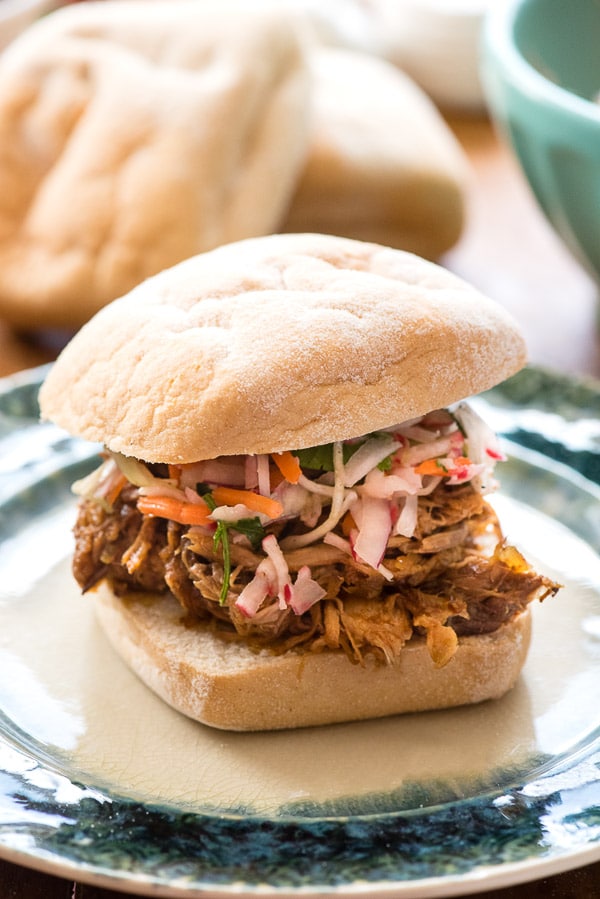 If you are not gluten-free, you may be scratching your head over that last description. I have found in my decade of being gluten-free that if gluten-free rolls are soft they tend to fall apart while eating them in a sandwich (especially with any moisture in the filling), OR if they are a sturdier consistency they are often made with tasteless flours, leaving me to feel like I’m eating cardboard. These rolls are soft, with good flavor AND they stay together. The perfect partner for my juicy slow cooker pulled pork sandwiches (which also tested the roll’s ‘stamina’ and they passed with flying colors, even with gluten-eaters). 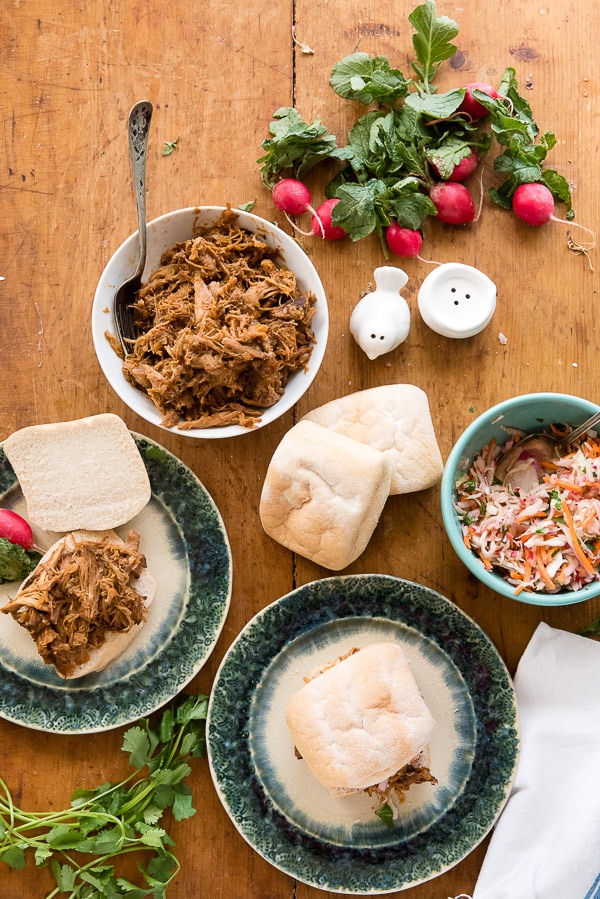 I think you’ll find this slow cooker pulled pork will become a recipe you’ll make on repeat! The three-pound pork shoulder (also called boneless ‘pork butt’ if you are shopping for it) makes plenty of pulled pork for a crowd. It also freezes well so you can make a batch and freeze part of it for future meals. It’s great in other recipes too such as omelets, wraps, quesadillas and salads. 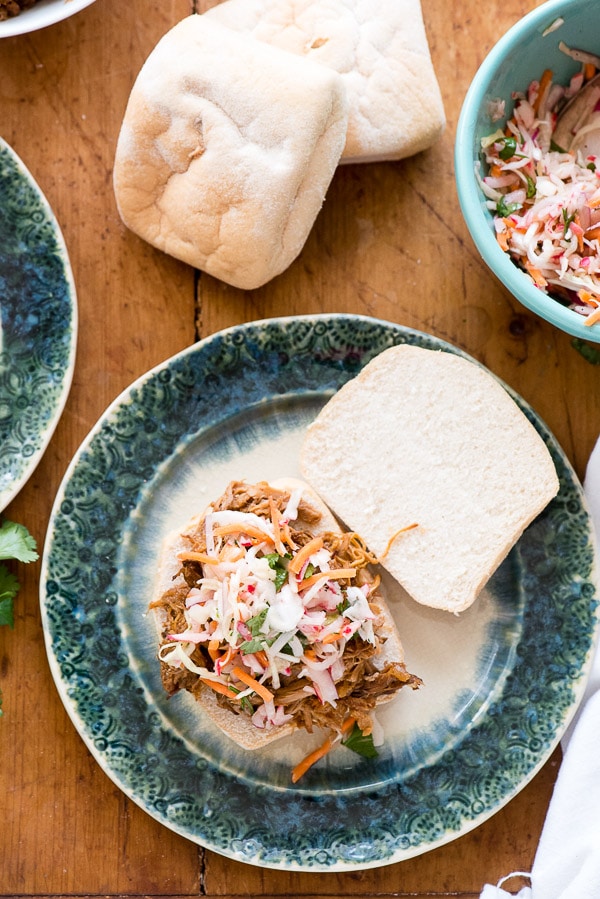 The radish slaw is light and refreshing, adding a crunch and a bit of a bite from the spicy radishes which is fantastic with the slow cooker pulled pork sandwiches. It’s a combination of grated cabbage, carrots, red onion, fresh radishes and a light dressing. Unlike traditional cole slaw which is used as a side dish, the radish slaw is not saucy, nor overly flavored with the sauce ingredients, allowing the pork and roll to take center stage with the recipe. 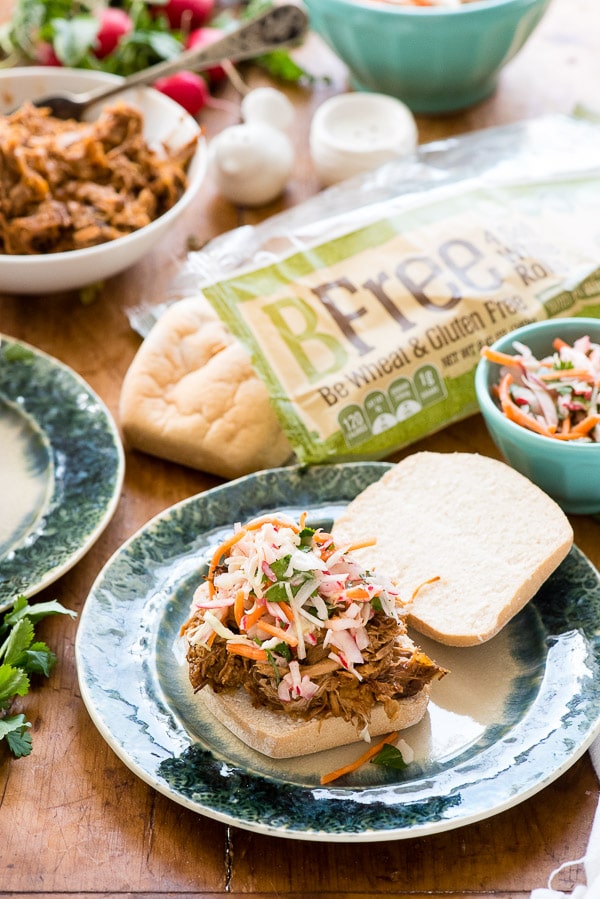 WHERE TO BUY BFREE GLUTEN-FREE BAKED GOODS:  BFree foods have just rolled out into King Soopers stores! Look for them in the baked goods area. They also may be purchased online at The Gluten-Free Mall or at these select stores around the U.S. 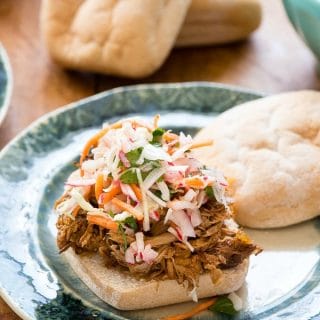