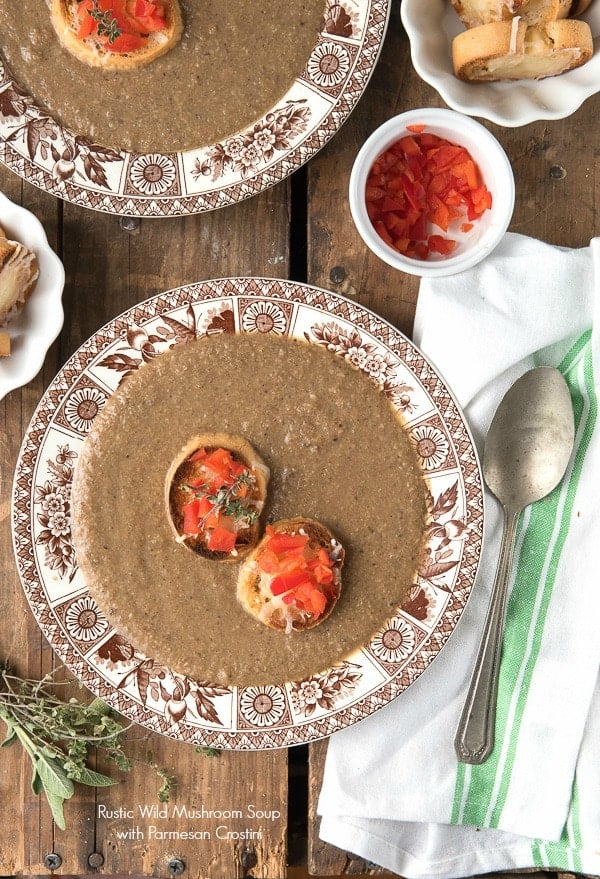 I recently shared a peek into a long weekend I enjoyed earlier in October with some food blogging colleagues in Breckenridge, Colorado. Before I went some non-blogger friends were intrigued, wondering how we’d spend our time, what it would be like to weekend with people I’d never met live and how forthcoming we would actually be, thinking if one gives away their top tips isn’t that the wrong thing to do?

It was a bit of a life changing weekend for me on many levels. Connecting with online friends in the flesh creates a completely different dimension to a relationship. Four of us live in Colorado but candidly it would take a trip like this to get together. The hour in between us might as well be a several hour flight for the difficulty in meeting up. We are all busy moms and bloggers making it difficult to see each other. Add in the rest of the ‘girls’ who flew in from all around the country and it was time to really buckle down and saturate ourselves with the time available. 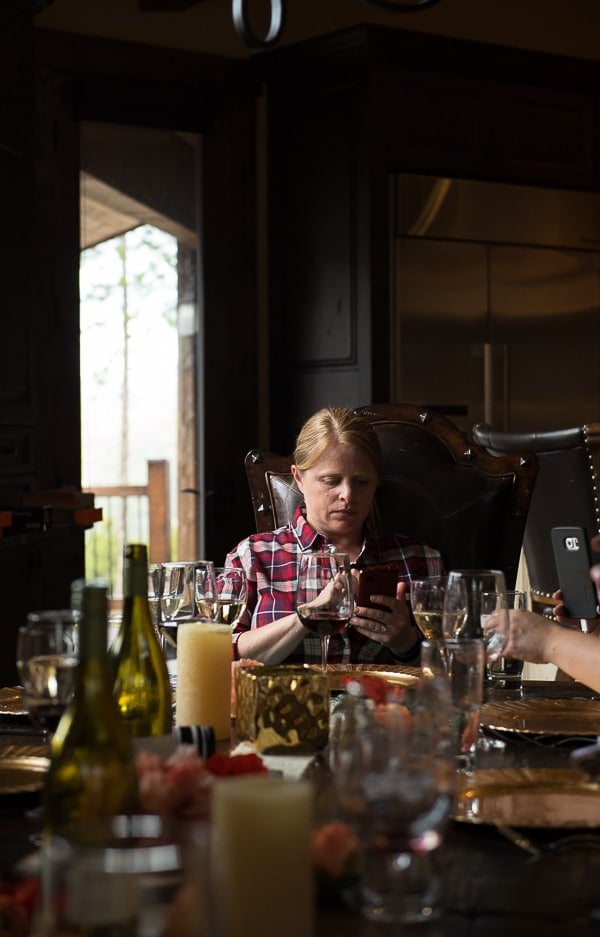 Erin Sellin (Dinners Dishes and Desserts). Lots of social media sharing of our weekend (and a little bit of wine too)! 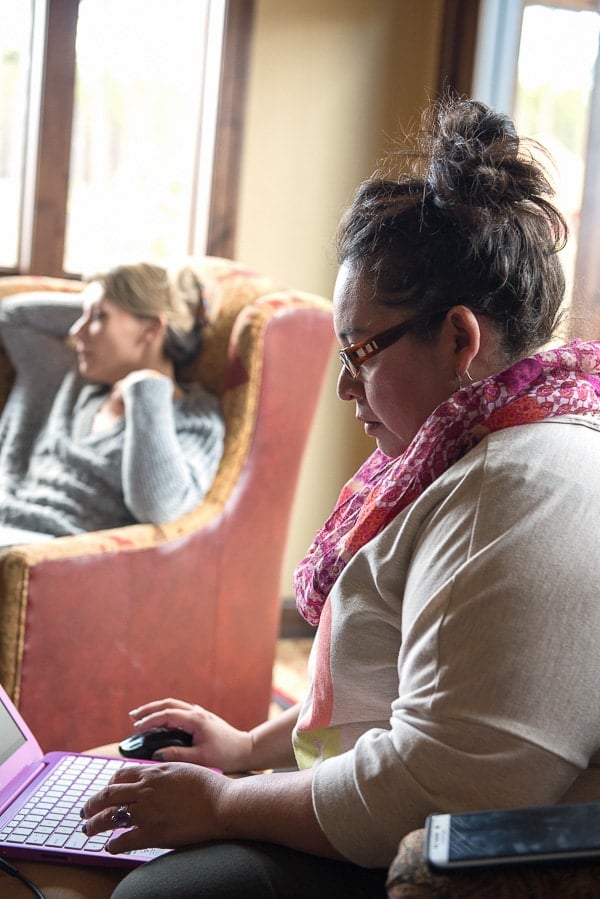 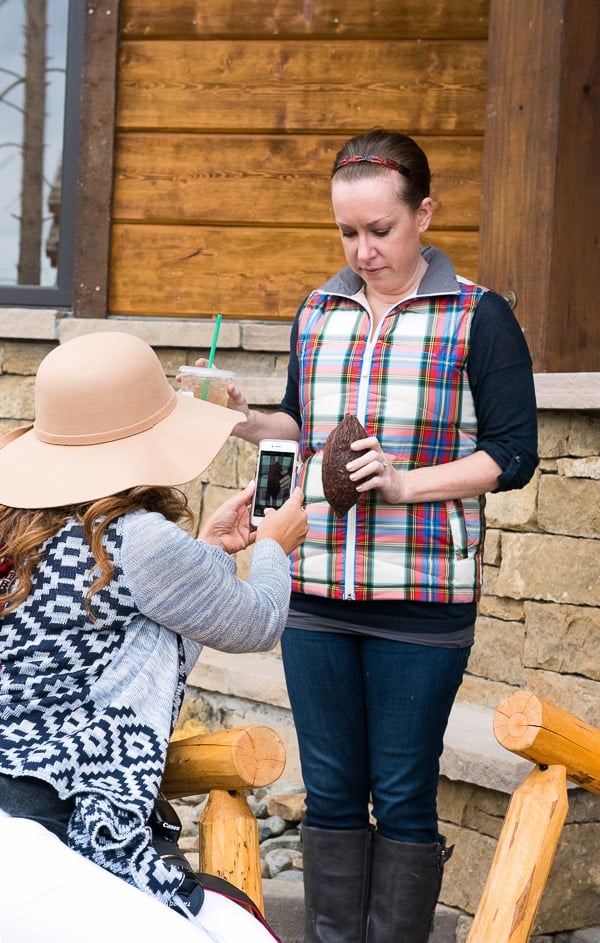 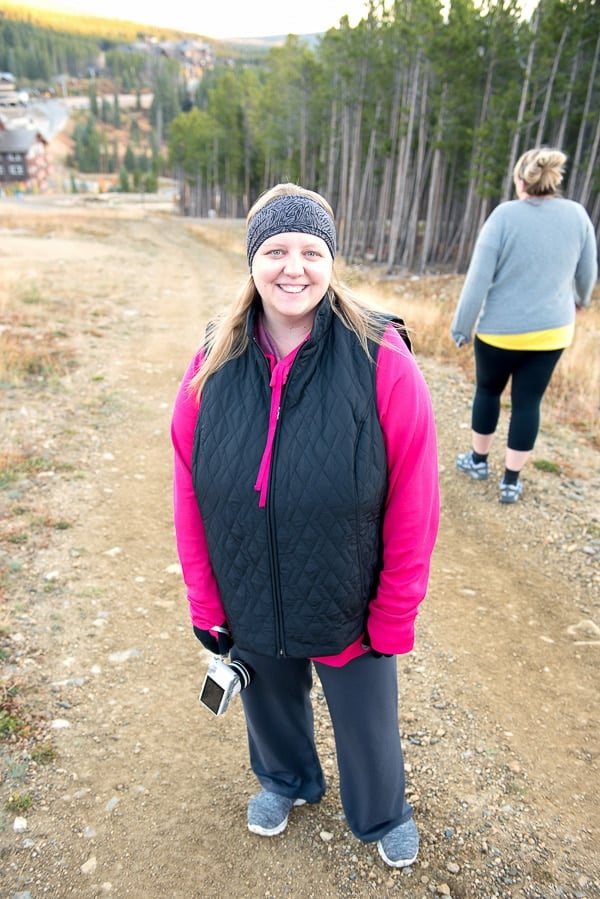 We had loads of fun in between working hard to leverage each other’s successes and find ways to support each other going forward. Between the educational sessions, exploring downtown Breckenridge and taking long overdue personal photos for many of us (we are all behind the camera most of the time) there were few spare moments to be had. 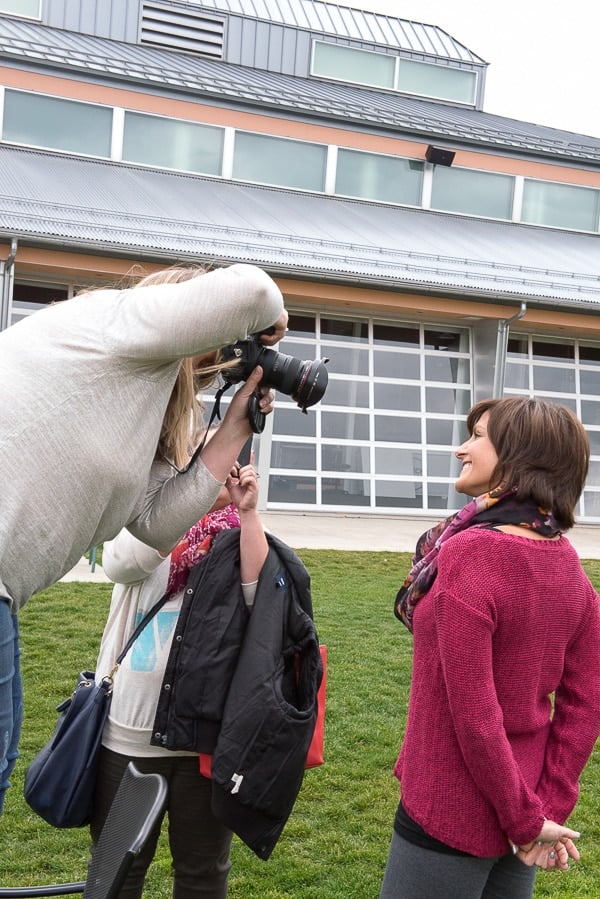 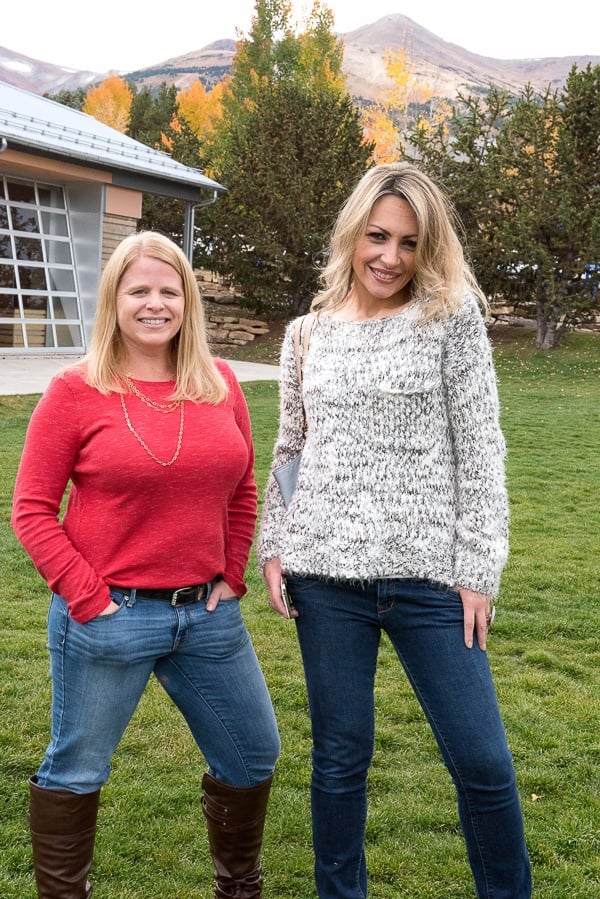 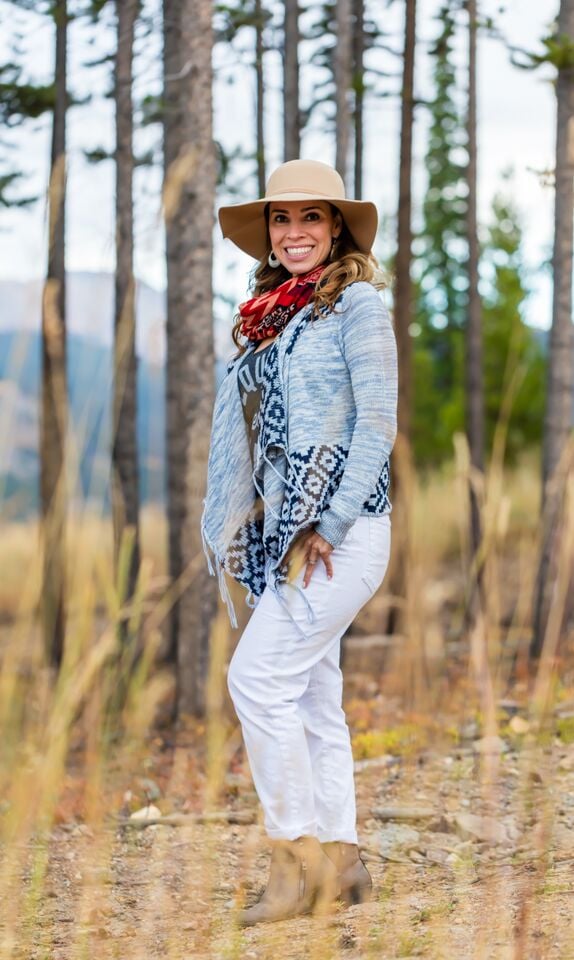 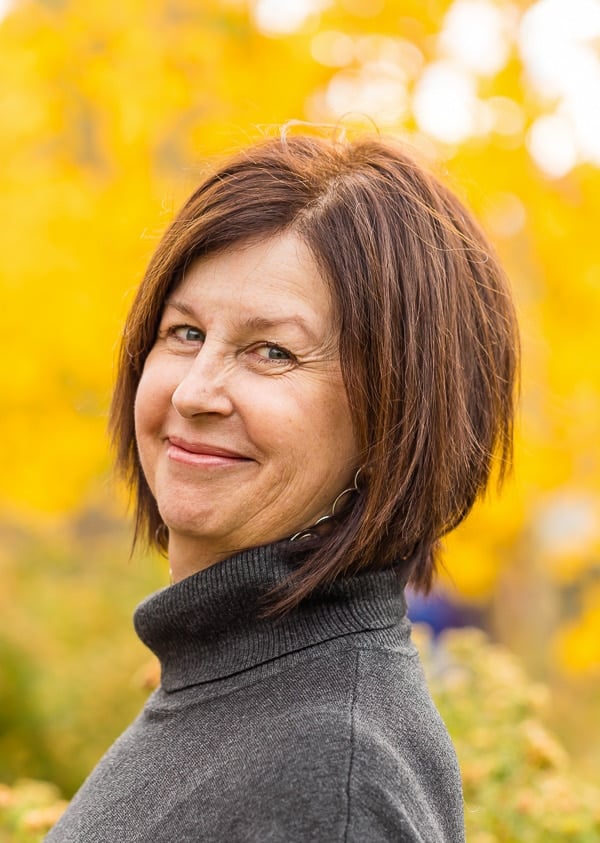 A fall shot of me!

We prepared all of our meals for the weekend with the exception of one. Chef Ian Truxton Buchanan came to our house to prepare a Colorado-inspired meal with local ingredients. He both teaches at Colorado Mountain College and does private classes for groups featuring a variety of cuisine types. His easy nature and bright personality folded him easily into the madness of our household over the hours he was with us. As you can imagine a gabby group of girls who all blog about food left us with our cameras in his dishes, peppering him with constant questions and snapping cell phone pics of his every move as though we were creating a documentary (rightly so it seems as one of the pics I posted on my Instagram feed garnered a ‘hot chef’ with an ok emoji). 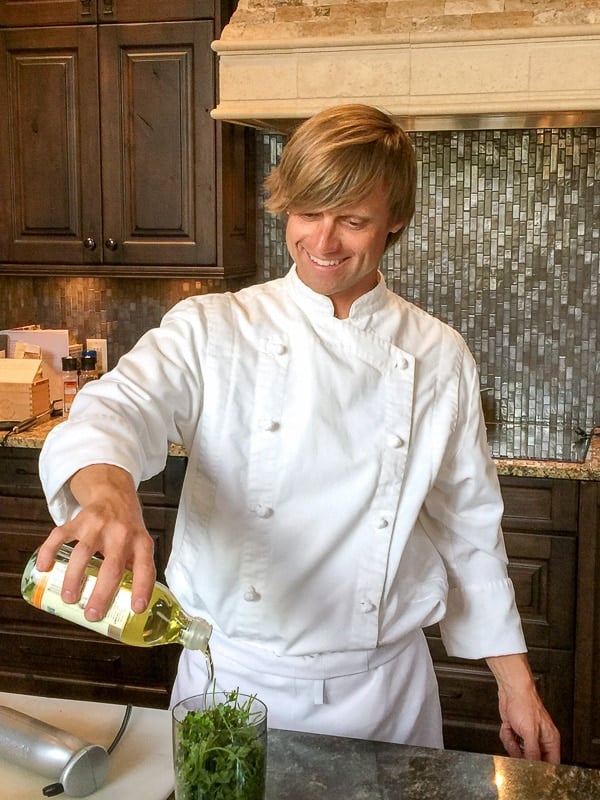 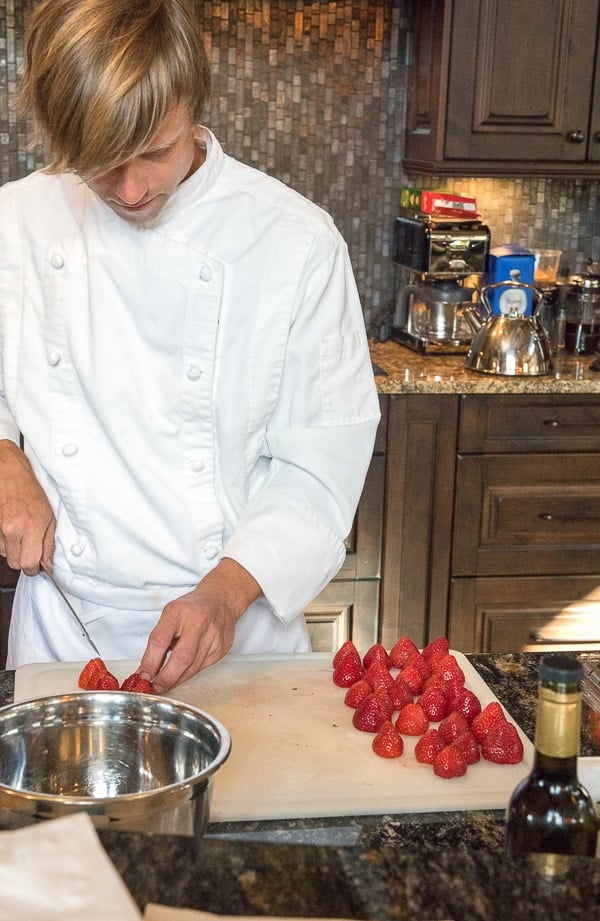 As you might imagine, the food was fantastic; thoughtful, layered with flavor and showcasing the chef’s sensibilities. He even kindly ensured mine was gluten-free. We ate well on our trip but I will admit Chef Ian’s mushroom soup stayed on my mind long after I returned from the weekend. So much so that I made my own version to enjoy at home and am sharing with you today! 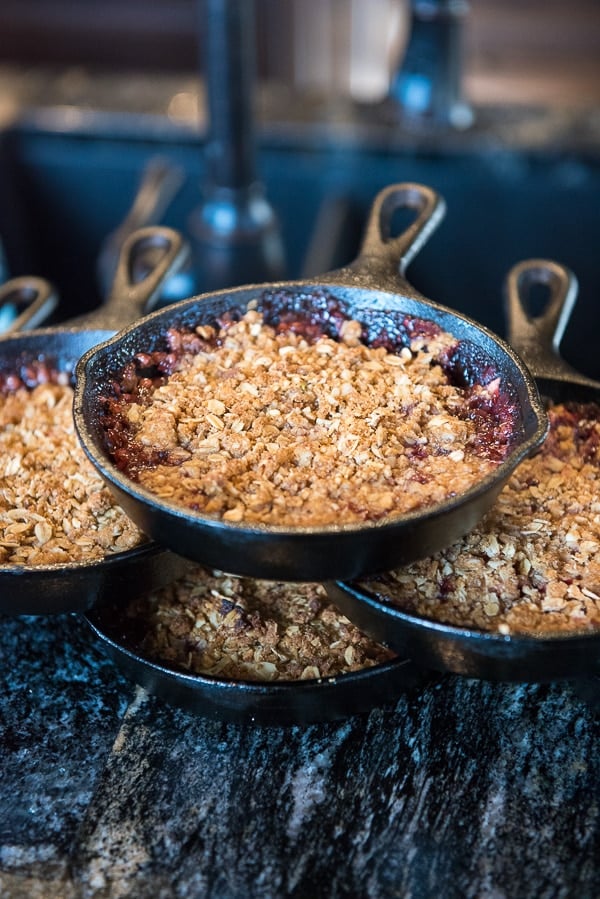 Growing up I really did not care for mushroom soup. It was prepared from a can and had little flavor. It wasn’t until I was an adult that I began to appreciate the flavors from combining mushrooms. A recipe I shared early on Boulder Locavore for Simple Mushroom Sauté and Rustic Pasta still remains a favorite. Farmer’s Markets often carry varieties of mushrooms (as well as stores like Whole Foods) that are perfect to blend together in a sauté, or soup, to achieve a deep flavor that I find irresistible.

While cooking the soup base I was struck by the earthy smells and appearance as though I’d gathered ingredients from the woods fresh for the soup. I loved watching the ingredients transform into the final rustic textured soup. The parmesan crostini are a must to be paired with the soup as well; they are irresistible! This is definitely a soup for the season, would be great for Thanksgiving and really tastes like what a mushroom soup should taste like. If you’ve never made mushroom soup from scratch, you owe it to yourself and you’ll never look back. I promise! 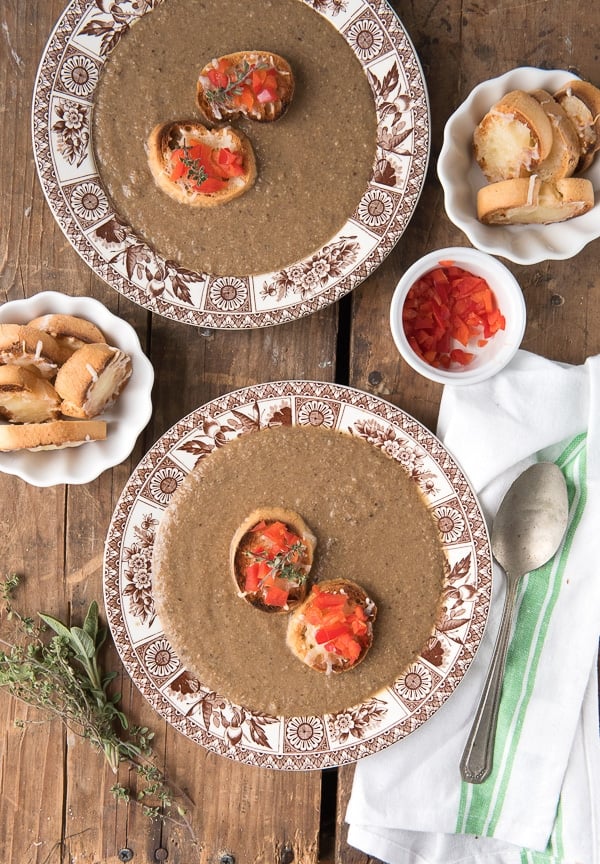 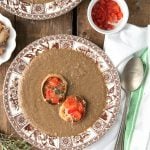 This rustic mushroom soup is made with three types of mushrooms offering a depth of earthy flavors that can't be beat. It is a non-dairy soup with a thick soul-satisfying texture. Paired with broiled parmesan crostini, the combination is irresistible and can be made with gluten or gluten-free bread. This is a soup that makes you long for cold weather!
Course Soup
Cuisine American
Keyword mushroom soup, parmesan crostini
Prep Time 20 minutes
Cook Time 42 minutes
Total Time 1 hour 5 minutes
Servings 6 cups
Calories 288 kcal
Author Toni Dash

Instructions for the Parmesan Crostini: 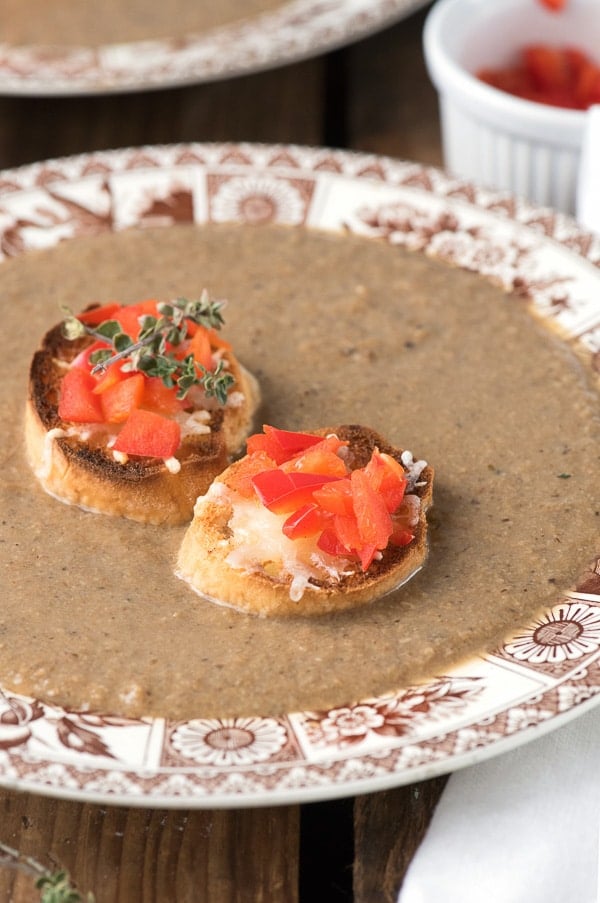 For more sights and sound bites from our weekend in Breckenridge check out our hashtag #breckblogretreat on Instagram and Facebook. Also our group Pinterest board ‘Recipes You’ve Gotta Make’ includes great recipes from all the retreat bloggers. Please follow and let us know if you cook some of them up!