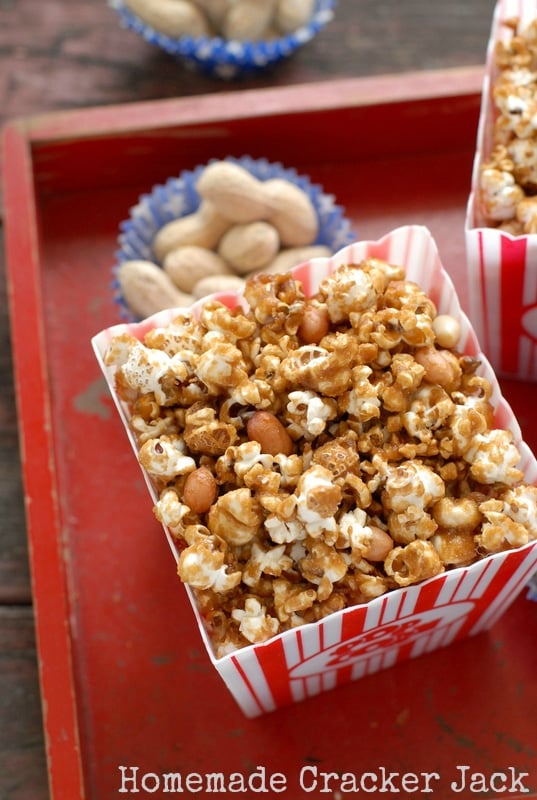 I don’t have memories of eating candy as a child but I do remember the allure of the Cracker Jack’s box. The cute cartoon sailor boy on the front. The neatly wrapped box holding the sweet, crunchy caramel popcorn and peanut mix AND the coveted prize inside. Early on, before my time, prizes included decoder rings and other captivating trinkets making it a most popular treat.

The Cracker Jack’s history is a success story detailing the promise of the American dream held in the late 1800’s. German immigrant Frederick William Rueckheim originated the recipe in 1872, developing the formula for Cracker Jack with his brother which he sold from a popcorn street cart. Rueckheim mass produced the blend for the 1893 Chicago World’s Fair which proved to be a launching point for the snack’s future. 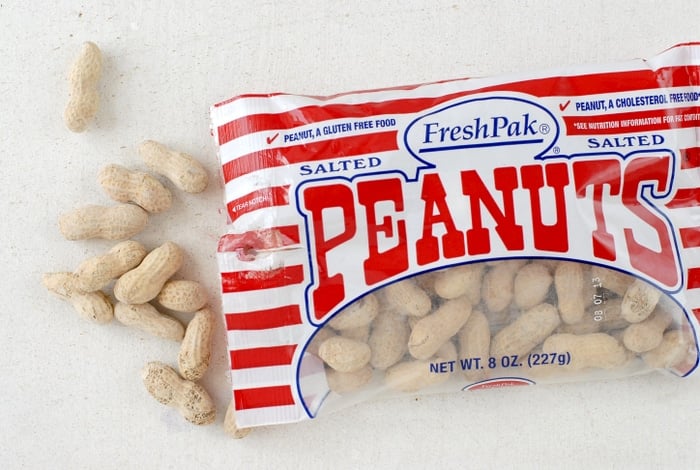 The facts about the name’s origin are foggy however one account suggests a pleased customer uttered the product to be ‘Cracker jack!’, an exuberant slang of the time for all things most excellent. The popular song ‘Take Me Out to the Ball Game’, with the signature lyric ‘buy me some peanuts and Cracker Jack’ in 1908, cemented the product’s role in American food history.

We’ve seen the product evolve through logos, flavors, and company ownership changes (all depicted in an infographic by Frito Lay, the current owner, below), marching arm and arm through 120 years of American history. Over time the ratio of peanuts seems to have decreased, a controversial topic addressed in the press by rabid fans, some of whom have taken to actually counting the peanuts to prove their point. Regardless of the changes the product is an undisputed success story in Americana food. 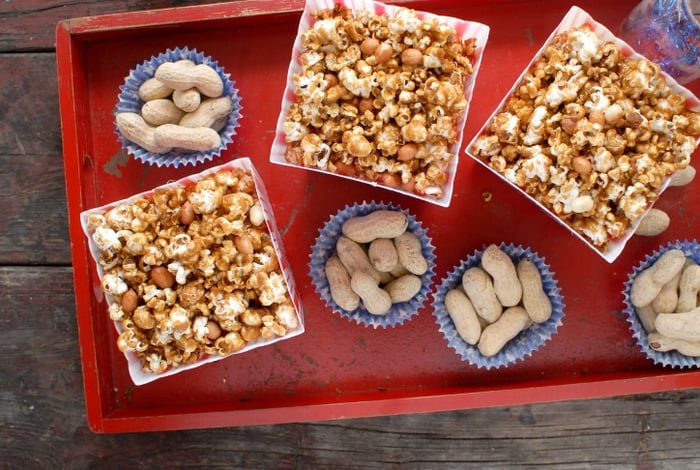 I have developed my own spin on Cracker Jack for the home cook. Unlike some of the other Americana foods I’ve featured in the past week I held true to my childhood memory of this product, albeit allowing an option for lighter coating if desired recognizing it IS bathing suit season. The original product included molasses which I’ve mimicked through the use of dark corn syrup garnering the thumbs up from my taste testers as being incredibly close the original version, as well as a worthy celebration for the true American snack. 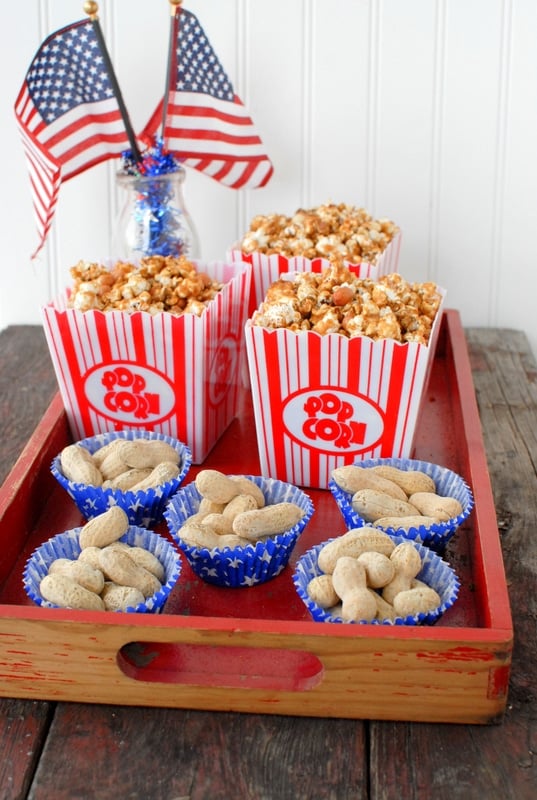 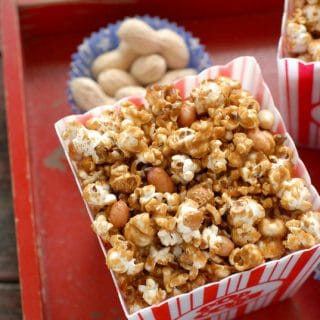 *for lighter coating use 12 cups popcorn; for a heavy coating use 10 cups popcorn. **In my research I discovered mention of difficulties when making similar caramel corn in highly humid conditions. Based on this I'd suggest making this Cracker Jack on low humidity days. 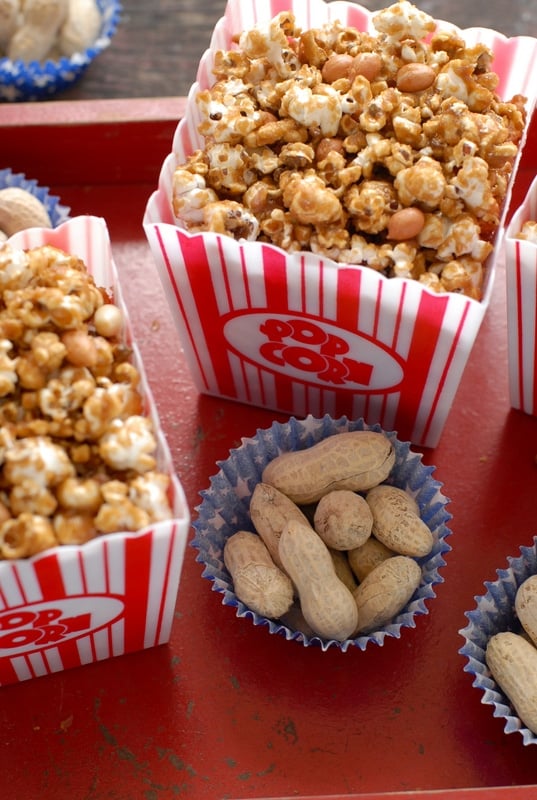 To culminate the past week of American food exploration I am holding a giveaway of two of my favorite things. My own life evolution can be marked by popcorn makers going from Jiffy Pop and a pot on the stovetop as a child, through hot air poppers, microwave popcorn as an adult back to the best popcorn popper ever, The Whirly-Pop, manufactured in the U.S. and producing the most lofty popcorn without burning on the stovetop. Winner may select classic silver or new addition red! 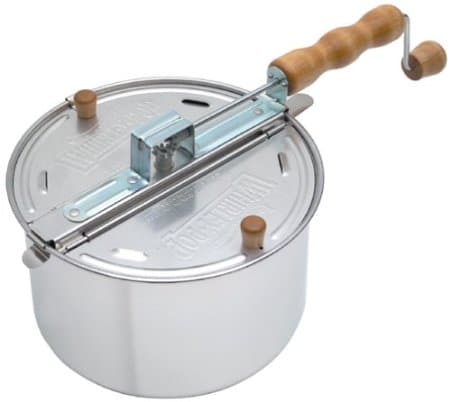 I’ve also learned that popcorn does taste differently if buying a quality brand. My favorite is a local Farmer’s Market discovery in Boulder from Boulder Popcorn. I made my Cracker Jack using three varieties they sell which ironically are close to red, white and blue in color. I’m including a bag of Boulder Popcorn’s ‘Mayor’s Blend’ which uses the three varieties I did in this recipe.