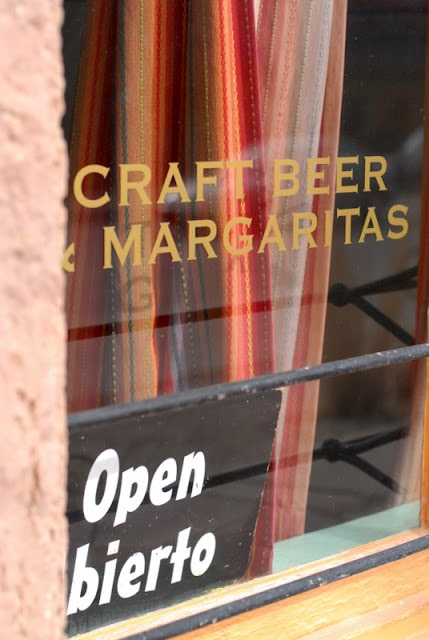 Truth be told, if I could spend the entire dreary heart of winter in my pajamas indoors, I would.  It’s a season for hunkering down, hibernating, and I’m not as light on my feet to go out exploring.
Despite my seasonal inertia I had gotten wind of something that compelled me to venture out to explore, full of hope from the indicators I’d seen. Twenty easy minutes north of Boulder lies the charming little town of Lyons Colorado. I’ve mentioned it before, drawn by its small town essence and intrigued by the Bohemian spirit of the non-conformist locals. I think everyone living there has a story that I suspect is nothing less than fascinating. The town is sequestered between two rivers and is the jumping off spot to the Rocky Mountains.
I’ve visited Lyons for years.  It’s a mere hop from my house and I love exploring new places, restaurants and shops.  When I first starting visiting, there was a fabulous restaurant called Cilantro Mary’s on the corner of the main street and the juncture of the road that winds up into the mountains headed for Estes Park.  I fell in love immediately with the clean, flavorful Mexican food, the shabby chic artsy décor and the warmth of the place.  It was a perfect place to visit for lunch or a wonderful brunch also serving the best Bloody Marys. 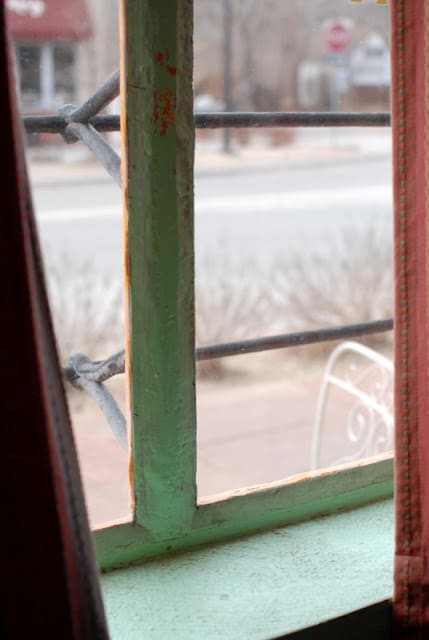 Sadly Cilantro Mary’s closed.  The town of Lyons has ebbed and flowed through differing opinions on the role of commerce in the community and the businesses have bobbed and weaved through that as well.  Subsequent attempts to rekindle the thriving business of Cilantro Mary’s failed, dramatically, and it seemed the verve would not return to the perfect restaurant space. 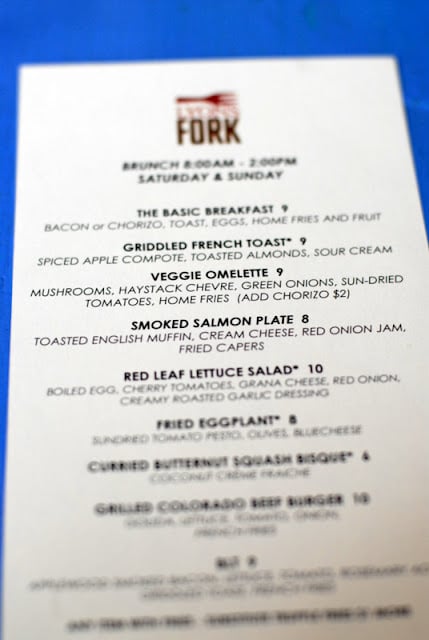 I got wind of a new restaurant, the Lyon’s Fork, having moved into the Cilantro Mary’s building.  A few Lyon’s locals mentioned it, and I got the feeling the quality of the food and its flair was perhaps beyond their palate.  I was hopeful.  When perusing the restaurants participating in Boulder’s First Bite restaurant ‘sampler’ week, the Lyon’s Fork was on the list with an impressive offering that I’d more have expected to find in Boulder or Denver (or frankly any metropolitan area known for fine food) for its culinary prowess and touted flavor profiles. When checking out their website I was instantly impressed.  Contemporary graphics, spectacular cuisine and a boat load of fun events, local music and more. 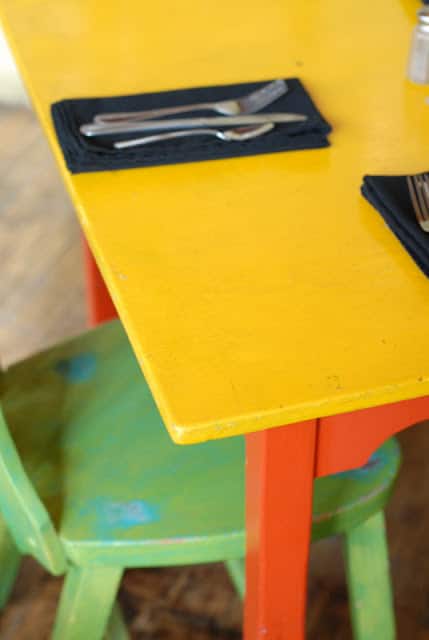 Last weekend I decided to try their brunch and really see if it was ‘all that’. When I entered the restaurant two strapping men were exiting and greeted me heartily. ‘This place is GREAT!’ one of them blared unprompted.

A very friendly, down to earth gentleman greeted us and offered us a table by the window.  He turned out to be Wayne, co owner of the restaurant with his wife Debbie.  They both began in the craft beer industry.  Wayne having worked at Lyons local Oscar Blues for years and his wife Debbie having worked in the industry in California.  They love Lyons, felt it was a good place to raise a family and are devoted to this restaurant.  It shows. 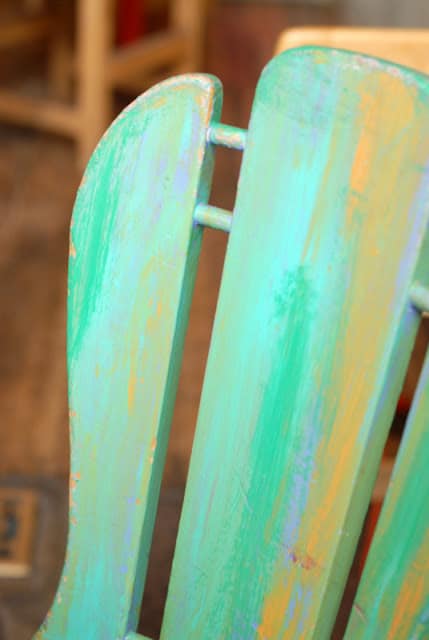 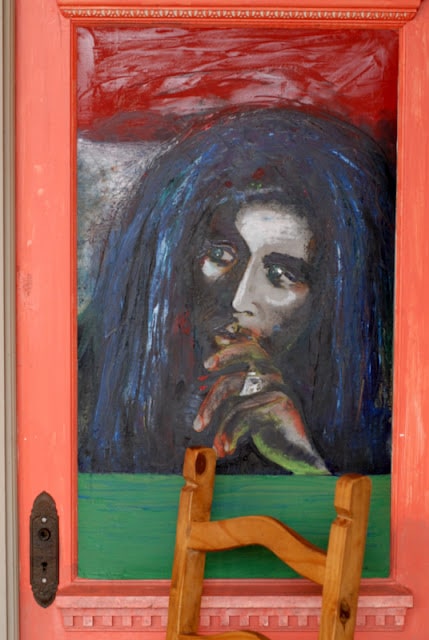 The brunch menu spans breakfast and lunch choices all bursting with flavor and creativity.  Wayne explained his chef, Ian, had been the Chef de Cuisine at Q’s in the Boulderado Hotel.  He had many flattering things to say about Ian but assured me I’d see for myself when tasting his food.
I opted for a special not on the menu (which is making my mouth water merely recalling it as I write) of blackened salmon over a (perfect) fried egg, over their house potatoes, sautéed bok choy and Hollandaise sauce.  My breakfast mate decided to have the basic breakfast plate feeling the true test of a kitchen is when making the most simple of dishes.  The breakfast included eggs any style, chorizo, house potatoes and oranges.  It also offered toast which we passed on being gluten free and instead of chorizo one could have bacon. 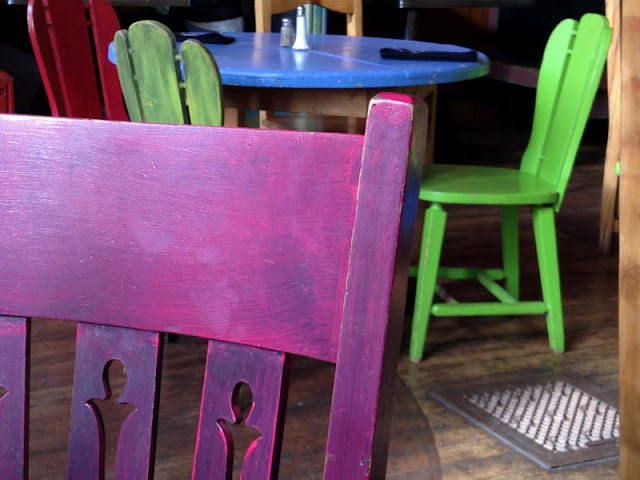 As we waited for the food I asked Wayne about their food sourcing.  They buy much of their produce in season from the Lyon’s Farmette.  It is a true farmette where the chef can build a menu around what is in season.  Chef Ian will be doing a Farm to Table dinner there where he can design his entire menu around what he fancies in the garden that day.  They also buy their beef in Colorado, pork from John Long (a name making any locavore rest a bit easier), Hazel Dell mushrooms, Haystack Mountain goat cheese and more.

Wayne and Debbie are committed to the region and the best ingredients for their food. It’s almost impossible to source from Colorado exclusively year round but I appreciated their level of engagement with the local food community. They strive to make almost everything fresh (even the ketchup served with our potatoes was made in house) changing their menu seasonally. They have a full bar and as you might imagine sport an impressive craft beer selection. The Fork has a soft spot for Southern, Mexican and Caribbean cuisine though more of a nod rather than full traditional dishes from those genres. Duck Confit Mac-and-Cheese. Stuff like that. 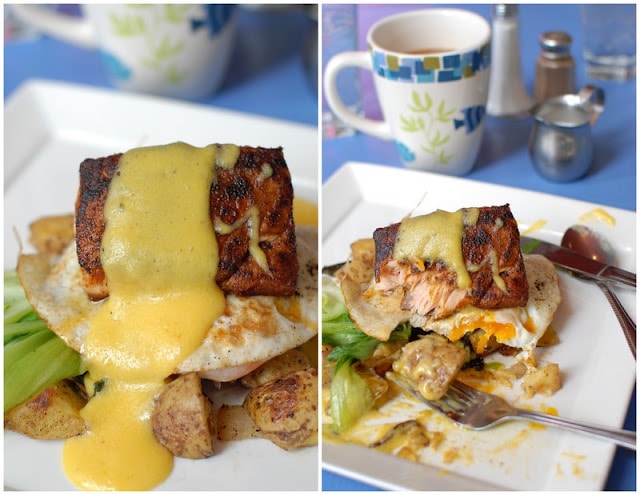 I will say both entrees were spectacular.  My fish was cooked perfectly.  The hollandaise sauce divine.  I don’t like fried eggs and stopped mid bite to take a photo finding it beautiful in looks and in texture.  One might dismiss the basic breakfast option but the scrambled eggs (sourced from Platteville) were a luscious flavor and light texture.  We were warned the chorizo was spicy but I would more say it had a most robust, full flavor perhaps of any chorizo I’ve tasted.  Unlike some which can be oily, these patties were smoky and smoldering with their heat.  A bit like the creeping effect of wasabi, this chorizo slowly expands to offer a significant, well rounded flavor without blowing your head off and permanently scarring your taste buds. 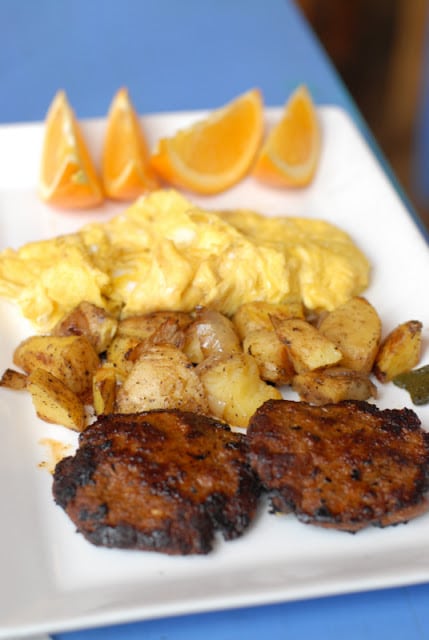 The Fork is open for dinner nightly and brunch on Saturday and Sunday.  Brunch as been a bit slow to catch on I’m sure after such a long vacancy of that local luxury.  It is a perfect stop on your way to a meander in the mountains, after a great local hike, or just to have a bite and poke around Lyons.  But more importantly it is worth the drive exclusively to dine there.  It has a cheerful feeling that is a cross of sitting in your favorite friend’s welcoming kitchen and place you just really want to be.   It has a great patio in the back of the restaurant that I noted got rave reviews on Yelp.  I can’t think of anything better than a drive out there on a sultry summer day, late afternoon, to while away the time in good company and cuisine. 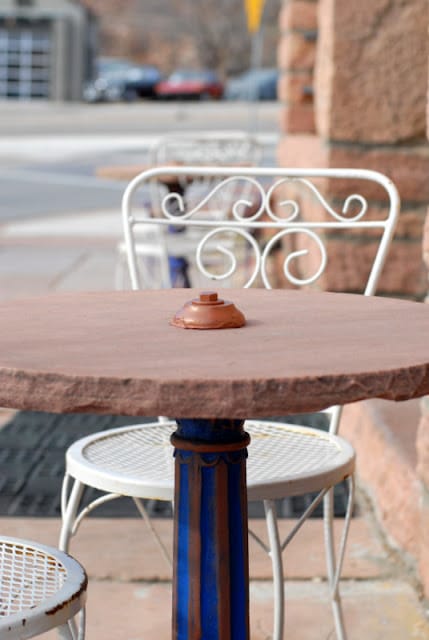 The Fork also has a few tables outside the front of the restaurant where you can sit and watch the world go by.

A note for diners with any restrictions:  I suggest calling ahead to inquire if it would work for you.  When I asked about accommodating gluten free diners for brunch I was told there were a few things they could offer though their menu is not extensive.  Certainly what I had was beyond my hopes gluten free or not.  It’s a small place and it’s best to call ahead to ensure your dining success. 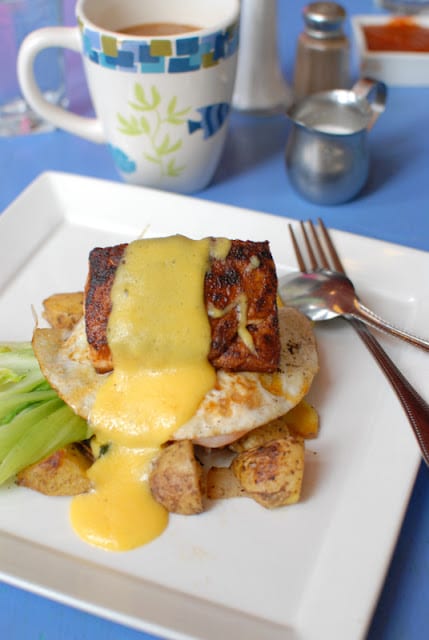 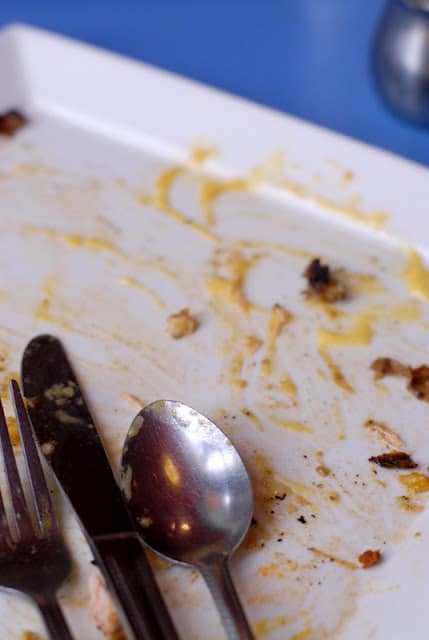 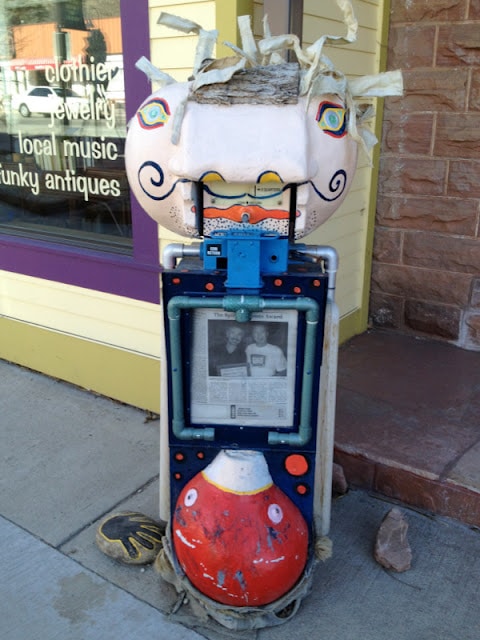 The town of Lyon’s has stepped up the pace in gentrifying the downtown making it a much more visually appealing as well as with more spots to check out.  Across from the Lyon’s Fork you’ll find a market with the basics as well as more boutique and gourmet items perfect for a picnic in the sprawling city park (one block over to the south) or to head up to the mountains.
For Coffee:  The Stone Cup on High Street (one block to the north, directly behind the Lyon’s Fork) has a great vibe, rotating artwork, a selection of food and sweets.  The Barking Dog on Main Street also is a fun stop.
I adore The White Lion shop (two doors down from the Stone Cup).  Lyla, the proprietor has taste and originality you’d never expect in a small berg such as this.  Her charming store is organized well with cutting edge finds causing me to drive out whenever I need a special gift.  She has an extraordinary collection of greeting cards I’ve not seen elsewhere, kitchen wares, baby items, inspirational books, artisan jewelry and more. Lyla’s husband George is a metal and wood craftsman whose gorgeous tables made from reclaimed wood and forged metal can be found (and purchased) throughout their store or in their charming back garden showcase.
There are a few antique stores, a high end custom fly fishing shop, a 1920’s style soda fountain, a quilting shop, Oscar Blues brewery, a shop featuring Colorado artisans and much more.   It’s not a large town but certainly one with a lot of spirit and worth poking around. 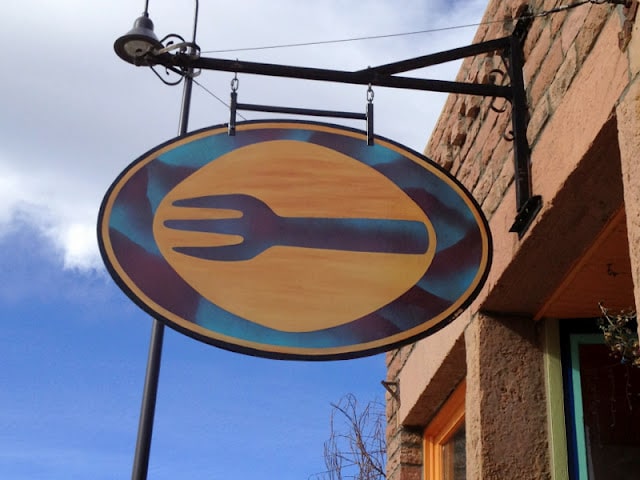 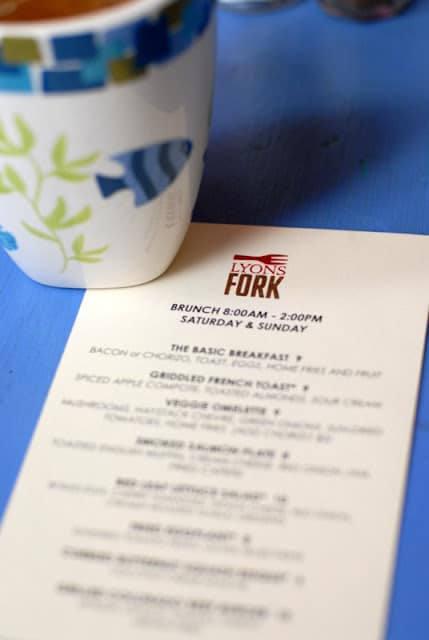