Even the coldest of winter days will melt into cozy comfort with a Glasgow Hot Toddy (cocktail). This piping hot sipper is great to take the chill off or curl up with if you feel a cold coming on. 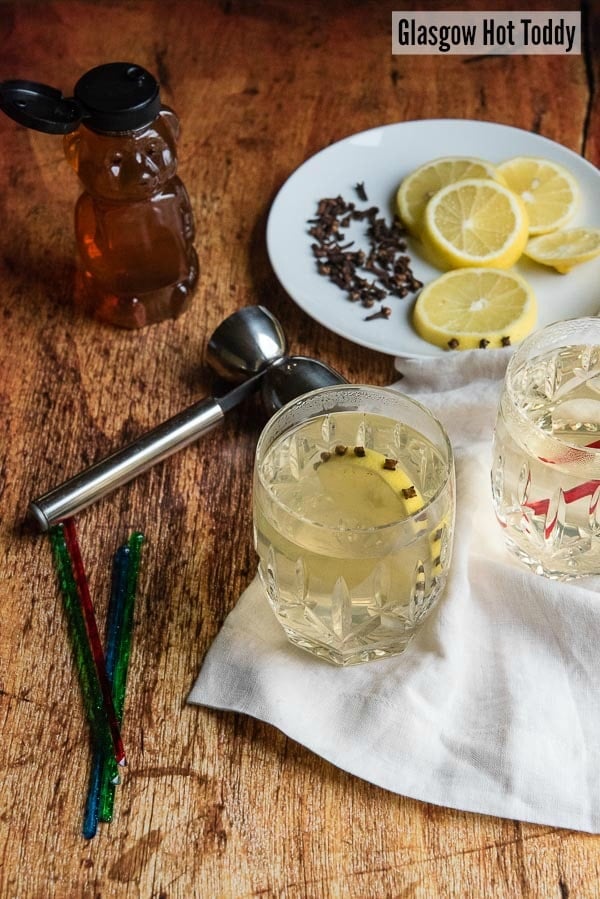 With the cold weather settling in I have a fire blazing all day and am craving hot food and drink to warm the insides. I noticed in my Facebook feed the other day, a hot toddy video floating by that instantly conjured my favorite smell and flavor of a Glasgow Hot Toddy, more commonly known in my house as ‘Uncle Wilson’s Hot Toddy’. It’s an original recipe on Boulder Locavore and one that was reprised live in Glasgow Scotland for me this past summer. So excited to share it with you now! 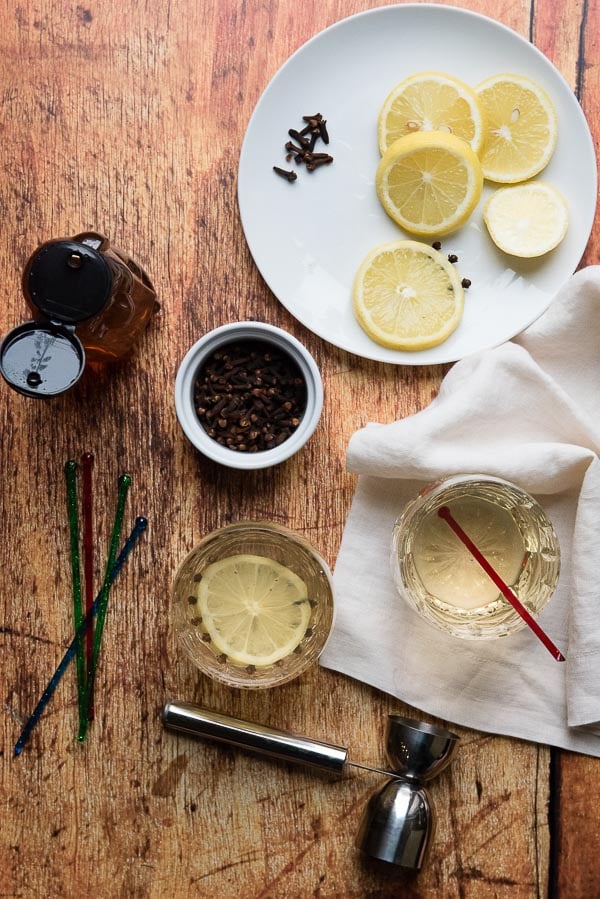 The genesis of this cocktail was originally shared in 2011 when a long-time Scottish friend, ex coworker turned adopted relative, was visiting us in Colorado. I’d befallen an untimely cold and was languishing on the couch in that scratchy sniffly early stage of a cold when Wilson sprang to action in our kitchen.

A shrieking kettle and the aroma of warm Scotch, cloves, and honey wafting in the air was a cozy greeting even before cupping the mug in my hands. It was just what the doctor ordered. Whether taking the edge off a winter cold or taking the edge off a chilly day, a Glasgow Hot Toddy is a what you want to be sipping. 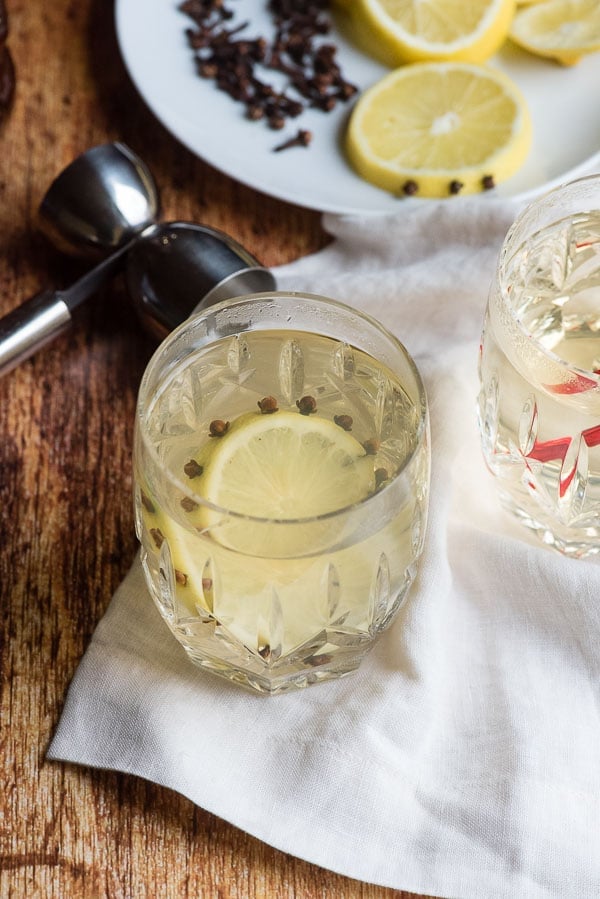 We spent a week in Glasgow this past August with Wilson and his family, and sadly by mid-trip I was coming down with what ended up being pneumonia. One evening while I suffered silently on the couch, Wilson asked what I wanted to drink and though it was still summer (a chilly, wet one in that moment) all I wanted was a Glasgow Hot Toddy; and he obliged! It tasted like what being wrapped in a warm cozy blanket feels.

What is a Hot Toddy?

Believed to be invented in Scotland in the 1700’s, a hot toddy is a warm alcoholic drink using liquor (whisky, rum or brandy usually), honey, spices and hot water. It’s often sipped for a cold or cough believing is relaxes the body when taken at night before bed, help relieve congestion (probably from the hot water) and ease a sore throat. 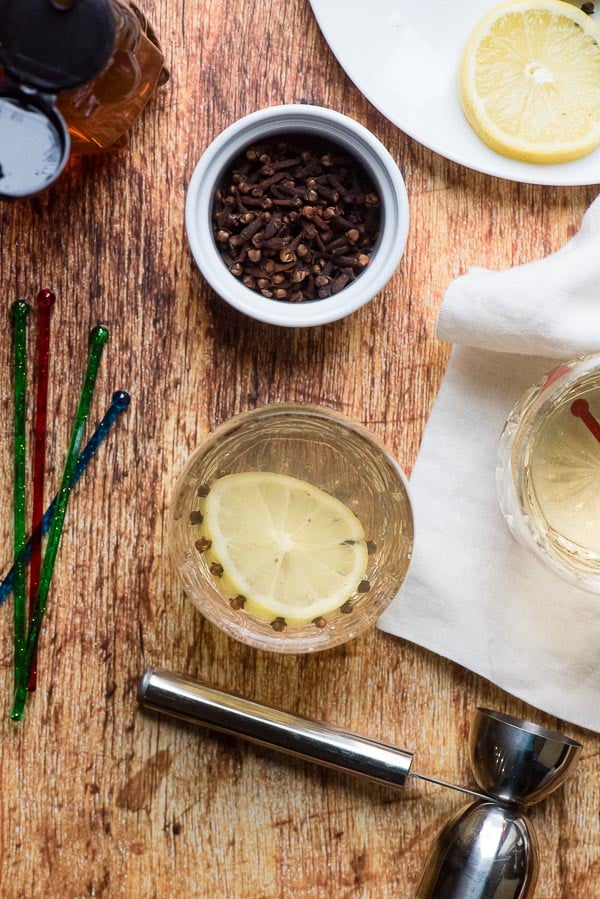 How do you make a Hot Toddy?

If you look through different recipes you’ll note they all vary. Often there is very little water in addition to the liquor making a strong tonic. Some make it with tea instead of hot water. My preference is the way Wilson serves it up; a good jigger of Scotch Whisky, enough boiling water to dilute the whisky, mixed with honey and a clove-studded lemon slice. Allowed to sit for 5 minutes (you can cup it in your hands and inhale while it’s infusing) the flavors are the ultimate comfort cocktail.

How to make a Glasgow Hot Toddy: 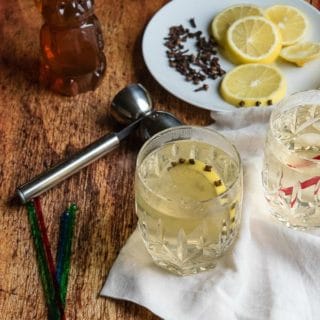 A Glasgow Hot Toddy warms any chilly day with Scotch whisky, honey, heated with boiling water infused with a clove-studded lemon slice.  Normally this would be made 'to suit' allowing flexibility in measurements of the ingredients.  This recipe is my favorite combination and one to be enjoyed fireside when ever the mood strikes.
5 from 6 votes
Print Save Recipe Recipe Saved! Pin Rate
Course: Cocktail
Cuisine: Scottish
Prep Time: 10 minutes
Total Time: 10 minutes
Servings: 1
Calories: 172kcal
Author: Toni Dash
Prevent your screen from going dark