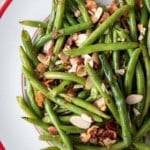 This fast and easy recipe is a perfect side dish anytime, holiday meals included. Fresh Green Beans with Bacon and Sliced Almonds is bursting with great flavors and texture. Always a favorite vegetable side dish.

Green Beans Almondine or Amandine is a classic French recipe. It’s simple with a delicious combination of flavors that can be whipped up quickly any time. Despite being simple it’s an elegant side dish too making it a perfect match for Thanksgiving dinner or other special occasions.

We’ve switched up our recipe for this French style fresh beans recipe. Instead of cooking it in butter we’ve added some bacon which takes ordinary green beans to the next level! It’s an easy green bean recipe that even picky eaters love.

What does Almondine mean?

The original French word Amandine (pronounced ah-mahn-deen) is a culinary term referring to dishes served with slivered, sliced or whole toasted almonds. American cookbooks use the term ‘almondine’ to mean the same thing.

The most common foods to serve amandine or almondine are white fish like trout or vegetables like green beans or asparagus.

The French version typically sautés green beans in butter (and sometimes other ingredients like shallots, lemon zest, garlic, or lemon juice) and garnished with almonds.

As much as we love the original buttery green beans we decided to change up. This version includes bacon and instead of adding that at the end we’ve steamed the beans to keep them crisp and retain their bright green color.

Then add them to shallot sautéed in some of the leftover rendered bacon fat (only 2 teaspoons!). Tossed with almond slices and it’s done! It only takes a few simple steps.

The great thing about adding bacon is it brings just the right amount of saltiness to the recipe too.

The result is an irresistibly delicious side dish with well-cooked crisp texture (never mushy), a beautiful crunch from the sliced almonds and the flavor of bacon throughout.

Bacon. One quarter pound or about 4 slices will be used.

Green Beans. You’ll use 1 1/4 pound and will need to trim off the ends (both the stem end of the green beans and the opposite end). We’ve used regular green beans but traditional French haritcot vert bean can also be used.

Haricot vert (literally translated from French to mean ‘green beans’) are a younger, slimmer green bean. If substituting haricot vert the cooking time will be reduced.

Shallot. Shallots have a wonderful sweeter flavor than regular onions giving a mild onion flavor to a recipe. One large shallot is used; peeled and diced.

In a large skillet over medium-high heat, cook the bacon until done but not crisp. Remove the bacon to drain on paper towels. Reserve 2 teaspoons of the bacon fat in the pan and discard the rest. Chop or break bacon into small pieces.

While the bacon is cooking, steam the prepared green beans using a steamer or steamer basket, until almost fully cooked 3-4 minutes (taste to test). Note: they will complete cooking when sautéed and to retain firmness they should not steam until fully done. Remove beans from the steamer.

Over medium-high heat add the diced shallots to the skillet with the bacon fat and sauté for 2-3 minutes. Add the green beans and sauté to coat and heat through. Toss in bacon and sliced almonds, salt and black pepper to taste. Remove from heat and serve immediately.

Vegetarian or vegan option. Exclude the bacon and use olive oil to sauté the shallots and green beans. Add some lemon zest or a squeeze of fresh lemon juice and a generous pinch of salt.

Add some garlic. If love garlic add a few minced cloves after sautéing the shallot. Sauté 30-60 seconds and proceed with the cooking process.

What’s the difference between amandine and almondine?

Nothing. They both refer to dishes garnished with almonds. Amandine is a French terms and almondine is the Americanized version of the term.

How can I make this ahead?

The recipe is fast and best when freshly made so we recommend making it before eating. However if you want to shave off a few minutes, steam the beans until almost cooked and immediately add them to an ice bath (cold water with ice in it) to stop the cooking. Remove with a slotted spoon, pat dry with paper towels and store in the refrigerator in a Ziploc bag or other airtight container for up to 24 hours until completing the other steps of the recipe before serving.

Store any leftovers in an airtight container in the refrigerator for up to 2 days. 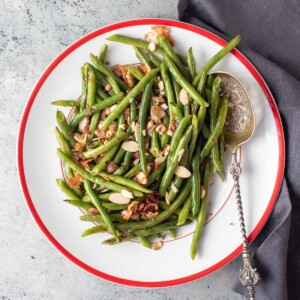