I’m not sure exactly what I expected when venturing to Studio F for an evening of local Chef Ian Kleinman’s molecular gastronomy cuisine. I can say I assumed it would be somewhat petit, austere food that if I were really sophisticated I’d be ‘intrigued’ by and speak of descriptively in very high brow terminology. My only real prior exposure to the genre was Top Chef Season 2 with Marcel’s endless foams.

For those not familiar with molecular gastronomy it truly is an intersection of science and food and drink preparation. Scientific techniques and utensils are used to affect the preparation of food and drink in untraditional ways often transforming the base food into a completely different substance. And in the case of Chef Kleinman, it is done in an extremely playful, whimsical manner. Gallons of liquid nitrogen touched most of all I sampled, including several spontaneous floor covering sprays of icy smoke, chilling our toes and leaving me questioning whether it wasn’t really Halloween for the visual.

When I arrived I was greeted heartily by Chef James Mazzio, Food and Wine Best New Chef 1999 and Studio F co-owner. The Studio F dining space had been transformed from the long tables of my first visit to plush couches lining the walls and smaller 4-top tables offering a much more relaxed, fluid ambiance for a meal that was incredibly interactive. Chef Mazzio offered my party a carnival bag of popcorn which was lightly seasoned and swirled before us in liquid nitrogen, leaving the bag heaving with steamy gas. The popcorn in the mouth was vibrantly chilled and fragile feeling, quickly giving way to its normal state whilst we blew smoke unsuspectingly through our nostrils like dragons. The tone for the evening was set.

Chef Kleinman’s dinner was all a la carte for both food and cocktails allowing diners to partake as liberally as they so chose. Each dish and cocktail was constructed with extensive thought and joy which was apparent in all those involved with delivering the evening. Many involved with the evening’s preparations were volunteers, merely loving the chance to play with their food and the chance to do so with their fellow chefs.

Chef Kleinman comes from a long culinary family lineage and brick and mortar restaurants. About 8 years ago he had an introduction to the unique cuisine style of Chicago’s Alinea, the most famous restaurant leading the molecular gastronomy charge in the U.S. It piqued Chef Kleinman’s interest enough to approach his then superior at the Westin to request a $50K budget to begin tinkering in the science-meets-cuisine realm. For about 8 months he conducted a self-taught second grade science course to emerge excited and producing food with a Cirque du Soliel type verve.

‘I believe it’s important always to respect the ingredients,’ he shared in earnest. And relating to focusing on molecular gastronomy cuisine he said ‘as a Chef it’s important to have a bag of tricks. Where before I could walk into the kitchen with 50 (tricks), I now have more like 200 things I can do with a given food’. He feels food, service and entertainment are all linked together in their importance for a meal. ‘The Inventing Room’, his business name, really says it all. Not currently being tethered to a given restaurant leaves him footloose-and-fancy-free to choose his gig, whether it be demonstrations of food and science in a school, whipping up 100’s of chocolate Legos for the opening of a museum or spending a week in the company of Chef James Mazzio at Studio F dazzling with food, cocktails and his warm charm. 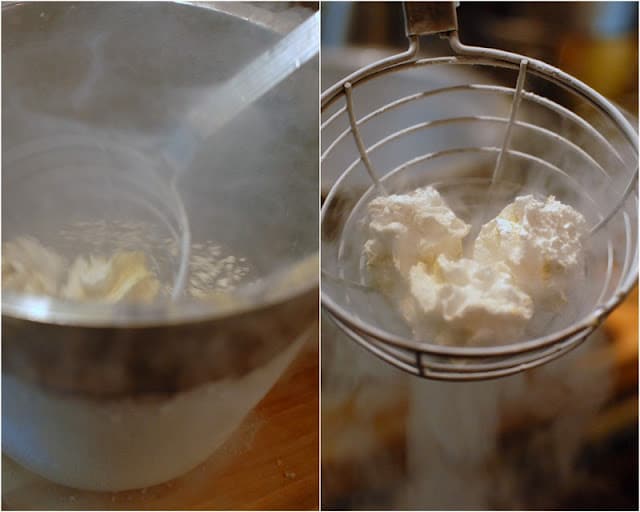 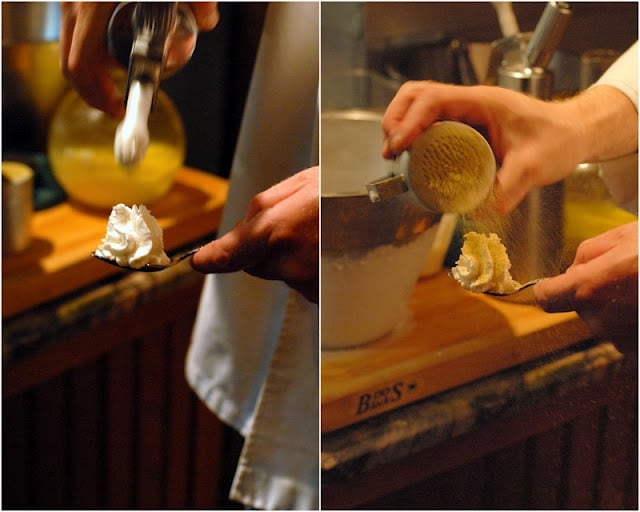 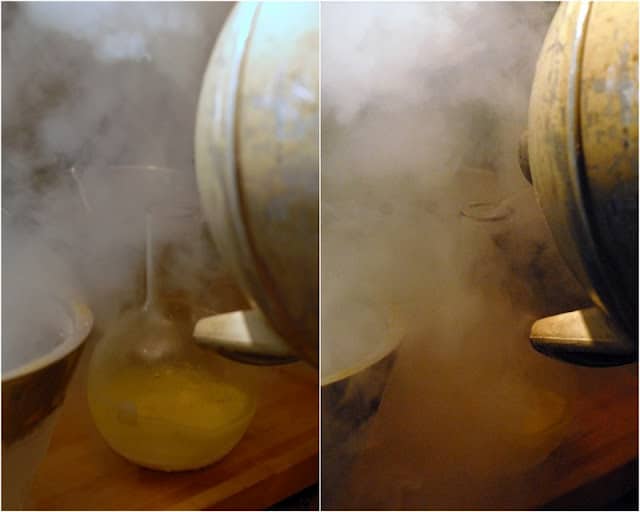 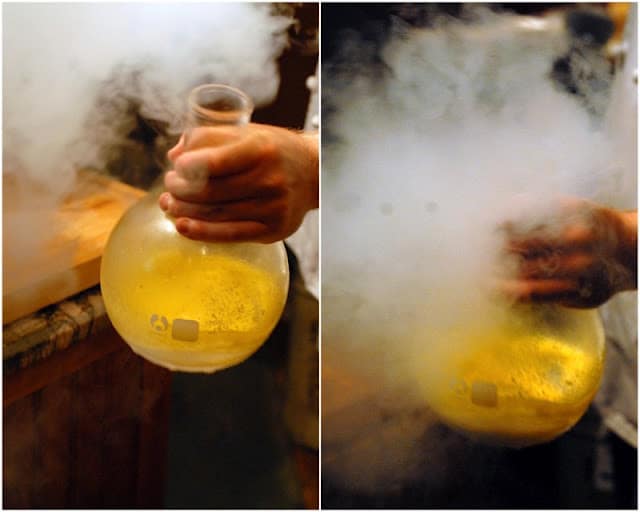 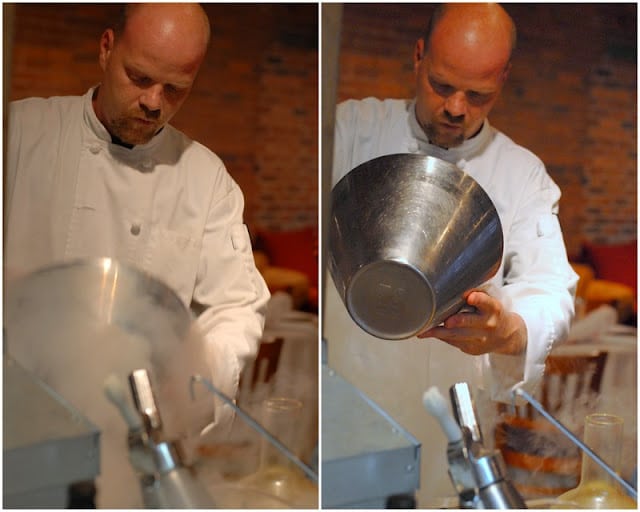 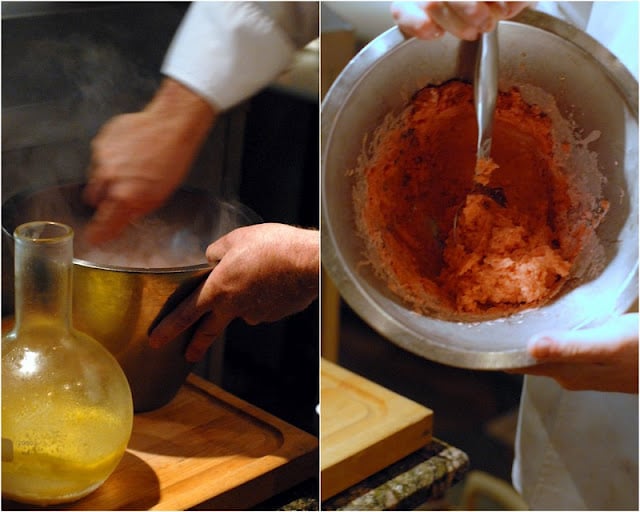 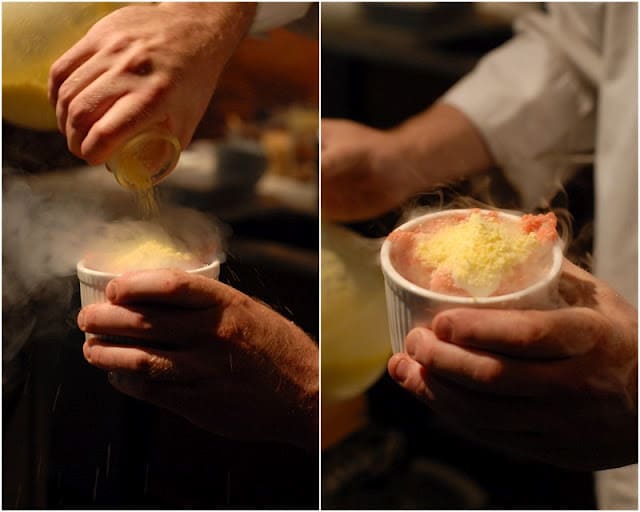 I’ve had a lifelong flirtation with science myself, always having been fascinated by the questions ‘why?’ and ‘how?’ I was completely in my element peering over the construction stations for the meal components and when being ushered to the preparation of the palate cleansers: Chile Relleno Space Foam and Strawberry Yuzu Sorbet. Up close and personal we witnessed as Chef Kleinman explained he’d cooked chile rellenos down to a simple syrup (straining off the solids), which he combined with cream in a whipped cream dispenser. Once dispensing some onto a spoon, he sprinkled it with Green Chile Powder then placing the entire spoonful into a vat of bubbling liquid nitrogen. Moments later they were scooped out, smoking and popped into our mouths. My first sensation was that I’d put a vintage glass Christmas ornament into my mouth and if I bit down it would shatter. An instant later I was flooded by the taste of chile relleno and cream which Chef Kleinman explained serve to coat the tongue and clear away prior flavors. Every moment of the entire evening was this fascinating, fabulous and fun. 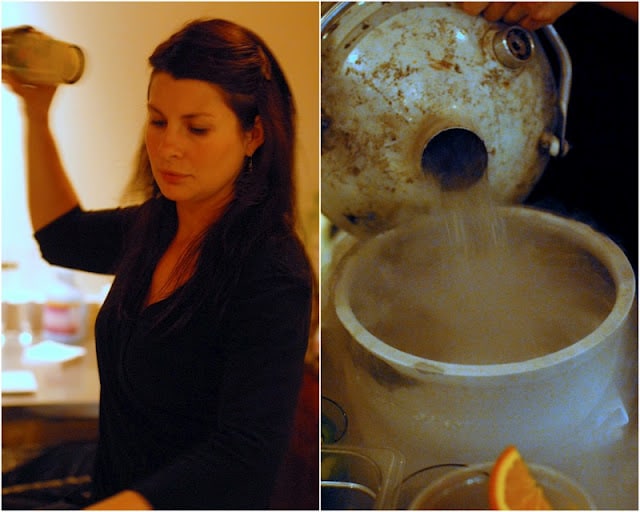 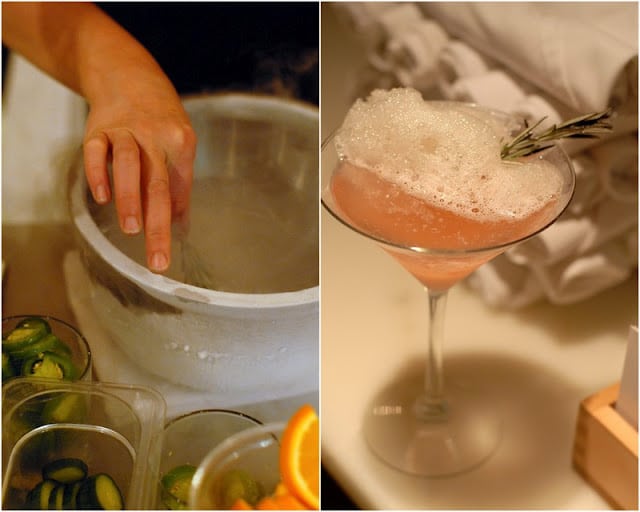 The lovely Catherine Olah, our molecular mixologist for the evening also has known Chef Kleinman forever and clearly loves the excitement and creativity the mixology genre has to offer her.  She showed me around her set up which also featured liquid nitrogen.  While I watched she prepared a Rosemary Greyhound featuring St. Germain, grapefruit juice, vodka, rosemary foam and a frozen rosemary sprig for garnish.  Frozen in liquid nitrogen of course.(Lower) Untraditional Pimm’s No. 1 Cup: a more expected gin Pimm’s Cup cocktail garnished with a strawberry lemon juice gelee shooter.I was struck by the depth of thought in every component in every dish. Each dish was comprised of multiple components each parading down an exciting path of having been sous-vide, covered and cooked for hour upon hour, being untraditionally applied or magically transformed through some other equally sexy manner. Each concoction was a dazzling convention of the unconventional.

By the time we arrived the main course fare I was smitten and had ceased taking detailed notes as each dish commanded multiple pages. I became instantly enchanted by the fried chicken which had the most light, delicate coating, a perfect crunch and yet was miraculously moist inside. What began to emerge for me is that my expectation coming in of pretentious, ‘chemical’ food was exactly opposite. This food was unexpected, whimsical, with flavors and textures that were incredibly comforting. There were textures I’d never experienced with food before as well. It all truly was nothing less than magicial. 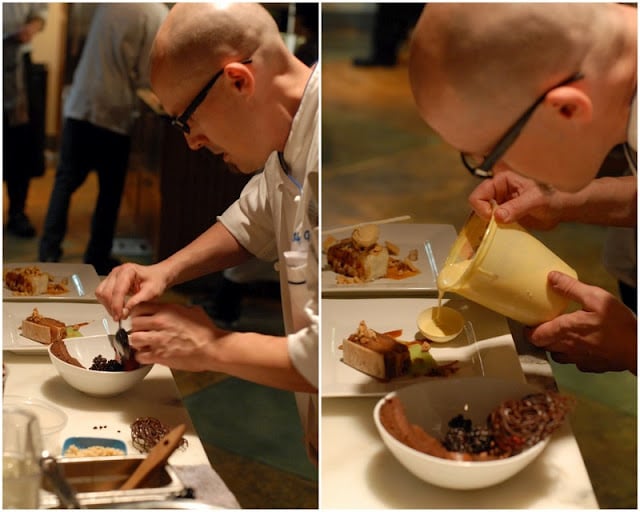 I hung over the dessert preparation station marveling at the expert assembly of food-as-art. Chef Sky Goble has known Chef Kleinman for over 15 years. The respect, camaraderie and enjoyment for each other was palpable. Chef Goble currently is the pastry chef at the Sheraton in Denver and had just completed a massive event that day. I considered the meticulous execution traditional high volume events would demand of him and what a way to figuratively let his hair down creating these gorgeous madcap desserts would be. The desserts lay somewhere between Willy Wonka on steroids and a game of Jenga for the precision assembly. All was nothing less than visually magnificent, offering a sampler of beguiling flavor profiles.

Flaming Absinthe. The Absinthe is flambéed, poured into a simple syrup cocktail. The snifter caps the cocktail tumbler causing a subtle boil and ‘smoke’ to gather in the snifter. The snifter is then placed on the table, tilted slightly and inhaled through a straw. Without exhaling, a sip of the cocktail is enjoyed. 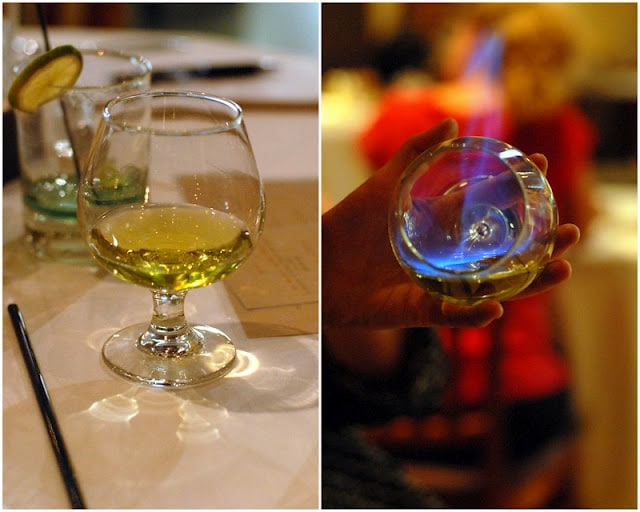 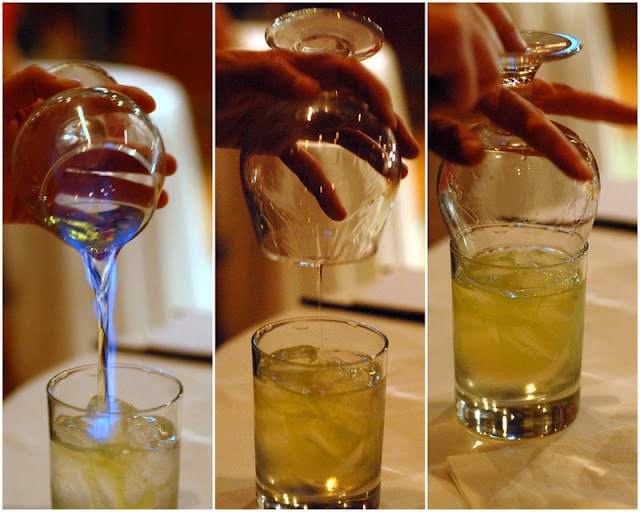 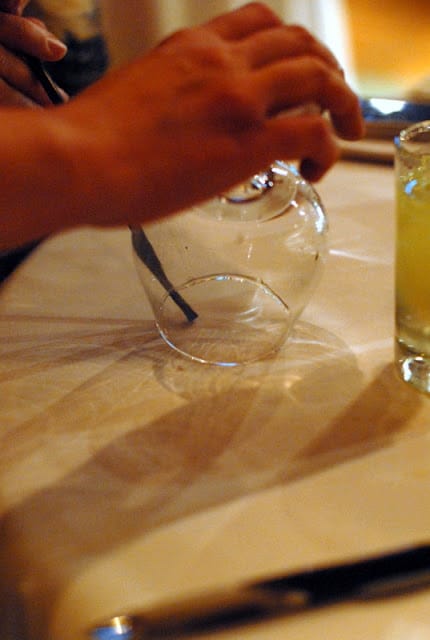 I concluded the evening uplifted and joyous. For the excitement and grounding flavors of the food. For the layer upon layer of fantastic discovery. For the feeling I’d been witness to and a participant in an inspired carnival of food and cocktail preparation under the warm, welcoming umbrella set forth by Studio F. Chef Kleinman and Studio F knocked it out of the park. Again.